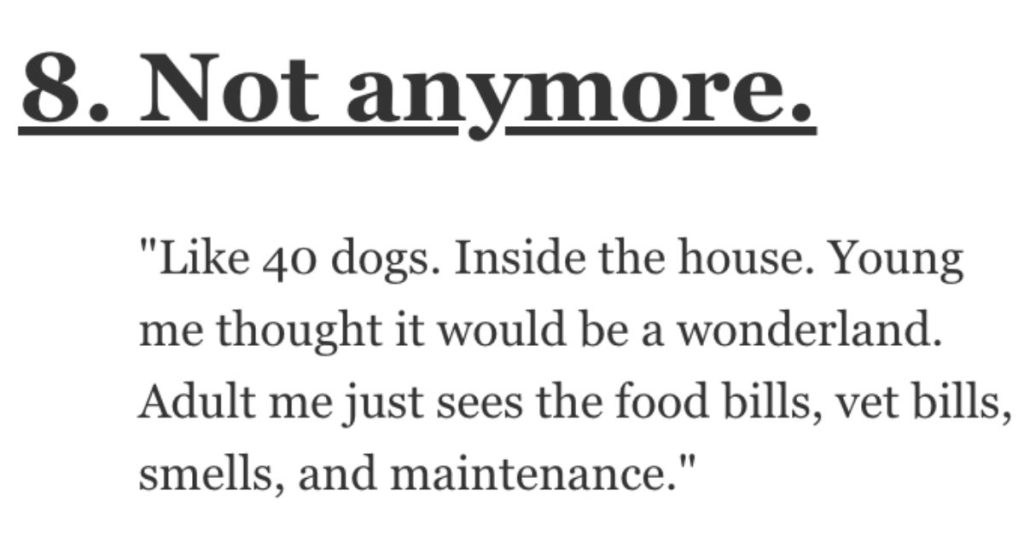 What Did You Want as a Kid That Seems Bad Now That You’re an Adult? Here’s What People Said.

Your perspective on things changes when you get older. No doubt about it.

I remember when I was young, I thought it sounded INCREDIBLE to be rich and famous and to live in a huge house with a ton of amenities.

Well…here we are, people…

I still think the being wealthy part would probably be cool, but I can’t imagine being famous on any level…not that I’ll ever have to worry about that.

But everyone’s perspective is different in this regard.

People on AskReddit talked about things they really wanted when they were young that don’t sound appealing at all anymore. Let’s see what they had to say.

1. This still sounds amazing to me.

“I wanted a moat around my house, filled with alligators, and you had to get across on a rope swing.

There would be a drawbridge, but only my grandma would be allowed to use it cuz I liked my grandma.”

As an adult it’s anxiety inducing.

Wondering if you will get in trouble for calling out of work, childcare and how to get the car out of the d*mn snow.

“To be extremely famous.

I believe that if I were to ever achieve fame I would want it to be for something in my career or if I had an insane talent. Otherwise, I feel like I am unworthy of fame.

Even now, I like to edit videos for youtube and while I could be a YT I can’t ever want to be EXTREMELY “famous”, I’d like to be underrated but still seen.

I wouldn’t want to be in shows, or how other young people who are famous in media are unless it was similar to my brand.”

4. How much is this gonna cost?

I was never a “cars” boy, but I did have the sort of understanding a car was a necessity. Now that I have one, I realize that these things are a constant tug-o-war between great convenience, and massive money-drain.

Anytime something goes wrong, I can’t help but dread what I imagine will be a major money sink.”

Too many responsibilities and obligations and bills and… just f*ck it all.

When you’re a kid you spend all your time wanting to be an adult.

When you become an adult you keep wanting to go back to being a kid.”

There were a lot of movies and TV shows on when I was growing up where they featured monkeys that people dressed up like babies.

They just fit into the family somewhere between babies and pets.

WTH was I thinking?”

As an adult, I can’t stand having a TV in the bedroom.”

Young  me thought it would be a wonderland.

A really pretty dappled gray with a long wavy mane and big dark eyes. And he would run right up to the fence to greet me and beg to go for a ride, and riding him would be my whole job because someone would pay me to do it, and I’d have a big house and a nice clean barn and a covered arena and acres upon acres of green pastures.

Man, I was a stupid little kid. Can’t even afford a second cat right now, let alone a privacy fence between my yard and the neighbor’s. Acres of land, my *ss.”

Katanas, longswords, claymores, falchions, cutlasses, I wanted to own all of them. Not just prop swords either, gotta be the real deal.

As an adult, I realize that 1) having a bunch of swords is pointless, and 2) unless it is a legit collection of historical pieces, it comes off as pretty trashy.”

“A pool, as a kid I was always jealous of my neighbours because they had one. I now realise that a pool is basically a really expensive pet.

It needs your constant attention and, if you don’t know what you’re doing, you can kill it.

The cost of maintenance alone was enough of a turn off for me.”

“From watching Spongebob, I used to think being a fry cook was the coolest thing ever.

Then I actually got a job as a fry cook and it was the shi*ttiest thing ever, with low wages and borderline abusive management.”

“My dream was to open a brewery which also specialized in barbecued food. It would be an amazing place.

It’s not worth the effort, because people are sh*t. The general public is sh*t to deal with (especially drunk general public) and good workers are really hard to find.

“Mine was filling a whole floor or big room of a house with all mattress.

Y’know, for jumping on the bed, big comfy pillow forts and just a gigantic bed.

As an adult, I realize that making that bed and cleaning sheets of that bed would be such a b*tch.”

“To own a restaurant.

I just assumed you make a ton of money and become a social hub where you generously treat your friends to meals on the house. Instead, it’s a ton of hard work, slim profit margins, toxic coworkers and a fairly large chance of failure.”

I had a childhood dream of owning 100 chihuahuas so I could stack them in my bathroom, then when guests open the door, its a tsunami of chihuahuas similar to the Kratt Brothers closet in Zaboomafoo.”

“I wanted the whole house to be under water so I could swim upstairs, into the attic and then back downstairs.

“The ability to eat or drink whatever I wanted, at any time of day.

I realize it’s a privilege but I wish someone would take the Oreos away from me at 7 am.”

I got my wish.

Being on Zoom 8 hours a day is not so amazing anymore.”

Once I became an adult I learned what they cost in upkeep, and it suddenly made sense why my dad said we would never own one.

Of course, even though I now know how sh*tty they are to own and maintain, deep down I still want one.”

“My mom was a scratch cook.

Everything she made was from wholesome, healthy ingredients. Not because it was a healthy lifestyle but because she really knew how to cook.

I could look in the fridge and cupboards all day and find “nothing to eat.” She could go in the same kitchen and come out a couple hours later with a beautiful complete meal.

So what did my dumb *ss want? Hamburger Helper. I whined. I pleaded. I cajoled. When I got a job I bought some and made it.

What a dumb kid.”

“To break a leg or something so I’d get a lot of attention.

As a child: Badge of Honor

As a Young Adult: A major inconvenience & Expense.

Middle Age and above: Possible Chronic Pain for life.”

Now I have one I do enjoy it but there’s a lot of cleaning, maintenance and heating/cooling bills.”

“I wanted to be a parapsychologist/ghost hunter.

Now I question the validity of ghosts.”

“I really wanted a horse when I was a kid.

When my mom asked where I would keep it, I said “The living room.””

“To become a doctor, mainly for the money.

But after I thought about it it’s a lot of stress and school. At least 10 extra years then when you’re in residency you have extremely long days and work shifts, either days in the hospital or being oncall. While there are some perks I’ve now realized that it is an extremely exhausting field to be in.

I’m happy where my life is heading, some of my friends had believed I was going to be a doctor because of how smart they thought I was, but I believe that I’d rather spend the time and effort on the people I love and on myself.

I’m not putting down anybody who went down this path, I actually have a huge amount of respect for you all, especially during all of this public health crisis. This was just one career that I wanted as a kid but realized it wasn’t what I wanted as an adult.”

Did you want something really bad as a kid that does not appeal to you at all as an adult?

If so, please tell us about it in the comments.

We look forward to hearing from you. Thanks!