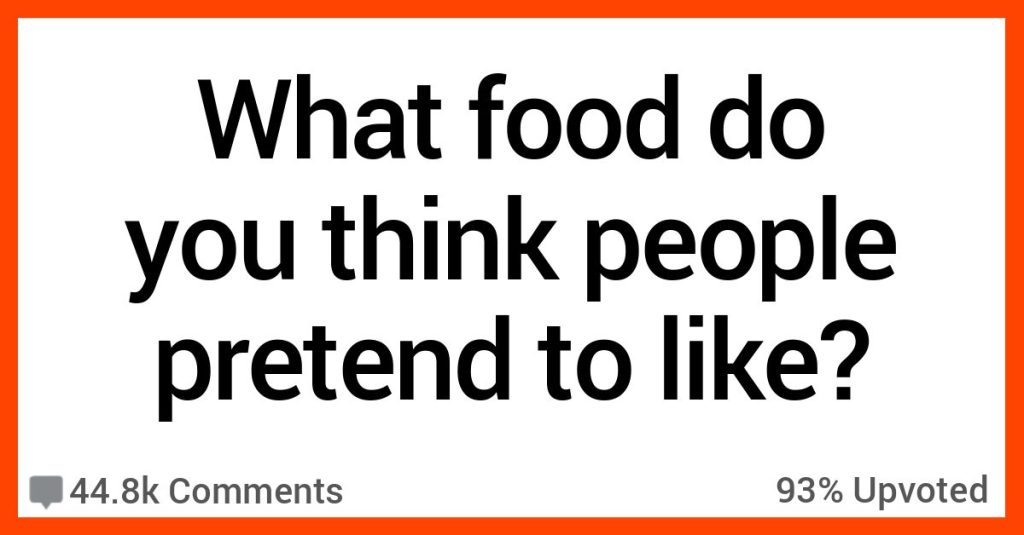 What Food Do People Only Pretend to Like. Take a Look at What Folks Said.

Let me ask you a question…

Do you think there are foods out there that people only pretend to like?

Maybe it’s because it’s all the rage at the moment or maybe people are just too afraid to speak out against a particular kind of food for some reason.

Whatever the case, it does seem like there’s a lot of this going around…or at least people think there is.

Shy would anyone drink that on purpose?”

I spend quite some time in the Philippines and I never saw one person actively ENJOYING the food but eating it because cheap and easy to get.”

If I wanted that texture and no flavor I would go outside and chew on gravel.”

There’s literally a series of adverts made by the company where the whole premise is ‘This sh*t tastes so terrible that even the slightest scraping will make you vomit.’

They’re not even pretending anymore. It’s not a food as much as it is an inter-office dare to see just what nasty bullsh*t they can convince people to eat.”

“Anything rose or floral flavored.

“Everybody gonna say oysters and even though I love oysters I get what they mean. They’re the texture of a thick loogey. They taste like saltwater and algae that’s marinated an old piece of discarded bubble gum.

But I love them! I love them so much! I love them with horseradish, lemon juice and hot sauces. They’re mostly just a vector for those flavors I guess. But I’d never really argue with a person who hates on them.

They’re objectively correct. I’ve just eaten so many things at this point, whacked off my taste buds so much, made them numb with fire and acid, that I’ve evolved to some twisted realm of flavor where culinary cenobites make me genuinely enjoy some clearly disgusting meal.”

“The food my nephew makes.

It’s too salty and its always made out of Play-Doh.”

“Anything that’s classified as a “local delicacy”.

And yes, I am Scandinavian, how’d you guess?”

“Some of the Jello salads out there. Green Jello with carrots (and sometimes raisins) is an abomination.

Also, whatever the hell my mom used to make with cottage cheese and orange jello.

My family had this weird notion that if you put healthy stuff in Jello that it was a side dish and not a dessert. Nope, you just ruined two foods by making unnatural combinations with them.

Mom never did come across a Jello recipe that she thought was a bad idea though.”

We eat this on Christmas on my dad’s side of the family and everyone hates how it tastes, but it’s an important part of our family history. His ancestors had to eat it to survive famine, and it’s a way of keeping the memory of their sacrifices alive and showing respect to them.

Having it with a table full of absolutely delightful cooking also serves as a reminder of what we do have, and makes us more aware of what we should be thankful for. We do drown it in mustard and cream sauce though.”

I refuse to believe anyone under the age of 80 enjoys this food.

“I have the soap gene for cilantro, so I had my fiancé try a bit (raw) to tell me what it tasted like.

Does it really just taste like grass for people without my curse?”

“Everything I eat at Rosh Hashanah.

Everything is described as an “acquired taste,” which is code for “not good.””

I eat all types of food.

I eat sushi, caviar, oysters, beef heart, tongue, etc but those two foods in particular have a certain taste that just broadcasts what they are, and it isn’t positive.”

“Those bitter gross leafs in some salads.

Those are weeds, not food.

Healthy doesn’t mean it needs to taste like poison.”

You all pretend to like them because they’re cute but in reality they ruin whatever they are on.

Leave my cupcake alone with your glittery crunchy nasty bullsh*t.”

It destroys the flavor and texture,.

You may as well just save yourself some money and buy chicken instead.”

To quote Kyle Kinane, “mayonnaise doesn’t go bad, it just becomes Miracle Whip. That extra tang in there, you know what that is? Patience.””

Do people actually eat that?

I feel like it work better as a doorstop.

It tastes like a syrup version of black licorice.

If I wanted to drink taint sweat I would just collect my own.

Sure, I’d love a sandpaper salad!”

if someone “Likes” candy corn they are alien who is trying to “fit in” with humanity, cause people weren’t suppose to like candy other than as fake gag food.”

I feel like once yet hit anything over USD 40 per bottle, all wines are just about the same levels of good.”

Chefs talk about how they love it and I think people say they like it to get foodie cred.”

Especially when the brewery prides itself on how hoppy it is.

That just means it’ll be so bitter you’ll barely be able to get it past your lips.”

Now we want to hear from all of you out there!

In the comments, tell us what foods you think people only pretend to like.