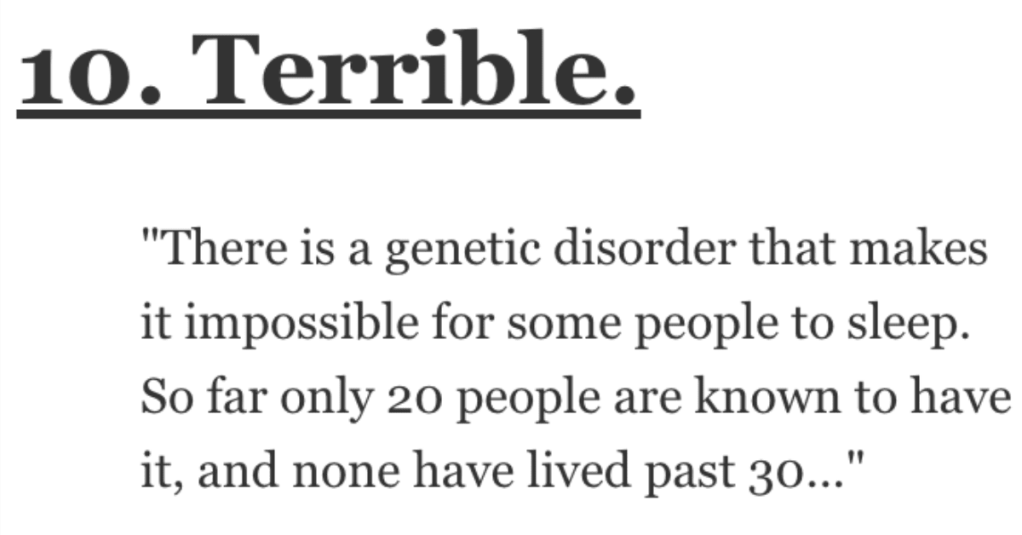 What Is the Saddest Fact You Know? People Shared Their Thoughts.

It’s sad, but true…the world is filled with a lot of sadness and tragedy.

What’s the saddest fact you know?

Folks on AskReddit spoke up.

“That I won’t get to feel my husband’s presence anymore.

He passed away suddenly on the 11th.

I miss him every minute of the day.”

“The older we get, the older our parents get.

“There are over 2,500 ancient languages that are either already extinct, or in danger of being forgotten forever.

Most of these languages are tribal in nature, such as those of Africa, and Central/South America.

Many of the Native American languages here in in the US are dying, but some are being preserved in language learning apps, such as Texas Caddo, and Cherokee.”

“There’s a recording of the last Kaua’i Oo bird singing before it went extinct.

It was a mating call sung by a male bird. The song has breaks for the female bird to respond.

There’s no response because the male Kaua’i Oo was the last of its kind.”

“Some people, either through loneliness, age, or mental health, are so closed off from the outside world that they either can’t or don’t know how to take care of themselves until they d**.

Most of the time the only way for anyone to notice that something is wrong is either by accident or the smell.

There is/was a Dutch guy who films the cleanup of those kinds of houses (he has a cleaning service specialized in those kinds of extreme cases). One woman’s toilet backed up and she just did her business on the bathroom floor for months.

In another case a guy had a square meter of space to sleep in, the rest was literal garbage halfway up the wall. He even made holes in the walls and floors to stuff it in.”

“Cats are the most euthanized pets in shelters even over pitbulls.

I worked at an animal shelter when I was a you g lad and every f**king time someone came to adopt a pet it was a dog! I even heard a family say “ we want a dog only cats don’t love you”

I socialized many of their cats and most of them were so sweet, and cuddly and made me just so sad inside everyday watching people adopt dogs and ignore the cats. This was a no k**l shelter but still it was so heart wrenching I quit because of that.

Cats do love you back you just have to earn their trust and they show it differently than dogs. All animals show love in their own special way.”

This can be for a variety of reasons, but one of the major problems is that a mother hamster will get stressed out and assume that she does not have enough food or space for all of the babies to survive inside of their tiny cage.”

“Overfishing has caused sharks to move further inshore to hunt for food.

You know what happens when they move closer to the shore? Yeah, we k**l them. They’re just trying to survive.

Also, the shark fin trade is brutal. People will catch live sharks and slice their fins off before releasing them back into the ocean.

Without their fins, sharks can’t swim and subsequently d** a painful d**th.”

“A dog will lie awake at night after getting in trouble or having a bad day thinking about it.

Additionally, dogs feed off our energy so if you are having a bad day, anxious or depressed that actually rubs off on your dog.”

“There is a genetic disorder that makes it impossible for some people to sleep.

“One of my neighbors has a nine year old daughter who has a very rare genetic condition.

She’s not expected to live much beyond her mid – late teens. The girl doesn’t know and believes she’s a perfectly normal child.

It’s heartbreaking to hear her saying that she wants to be a hairdresser when she grows up. She ain’t never gonna grow up”

“There has been a day when you and your childhood friend got out to play for the last time and none of you two was aware of it.”

“A guy in my area had just retired on a Friday. The following Wednesday he was out fishing and a thunderstorm came up.

He pulled his boat out of the lake and while standing next to his car on the boat ramp lightning took him out.

“Read about a dolphin who had learned some basic communication and was in some sort of pen.

Dolphins can s**cide by going under water and refusing to go back up for air. This dolphin was miserable and told it’s handler goodbye before going under and ki**ing itself.

The fact the dolphin was sentient enough to choose s**cide breaks my heart.”

“Elephants will mourn other elephants in their group dying and will hold funerals for them and will even recognize the bones of said elephant and cry out in sadness.”

These young seals are those who can’t mate with a female because a larger sea lion controls a massive harem.

After getting r**ed, the penguins’ head are munched off most of the time.”

“All whales eventually lose the energy to surface for oxygen, so they essentially begin to sink and drown.”

She was trapped in water after a volcanic eruption, kneeling with her legs trapped under debris, and there was no way to extricate her without triggering a rise in the water level, which would have dr**ned her. Responders considered amputating her legs but decided that she probably wouldn’t survive, and that the most humane thing to do was to let her d**.

The would-be rescuers and some journalists stayed with her for three days while she joked and prayed and sang and left messages for her mother before d**ng of either gangrene or hypothermia.”

Can’t imagine how the few felt when their shuttle exploded, some of their colleagues d**d and they are plummeting rapidly to their d**ths.”

“A majority of people, when asked, would rather d** at home than at the hospital.

A majority of people, when recorded, d** at the hospital rather than at home.”

“That s** trafficking children is real, actively ongoing, and adults will be professionally doing it all across the world any any given point.”

“For animal testing involving dogs, most laboratories use Beagles because they are the most forgiving of the people inflicting pain on them.”

“I learned today that if a grizzly bear has a single cub it will abandon it.

The hypothesis is that a single cub will need three years of care, while if she abandons a single cub now, next year or the year after that she is more likely to have twins or even triplets.”

“785 million people do not have access to safe water.

Access includes having having water within a 30 minute round trip for collecting it and carrying it home.”

“Bill Finger, the man who created a vast majority of if not everything that makes Batman a success today, not only never got credit in his lifetime, but was also called a liar by Bob Kane.

Kane who came up with an idea of a bat themed vigilante called The Bat-Man, later used his fathers law firm to make up a contract in which he not only got sole credit but also any major proceeds stemming from the success of Batman.

Bill d**d penniless and on his couch in a s**tty apartment in 1974 while Kane was running around telling everyone he created Batman and such.”

Do you know any sad facts?