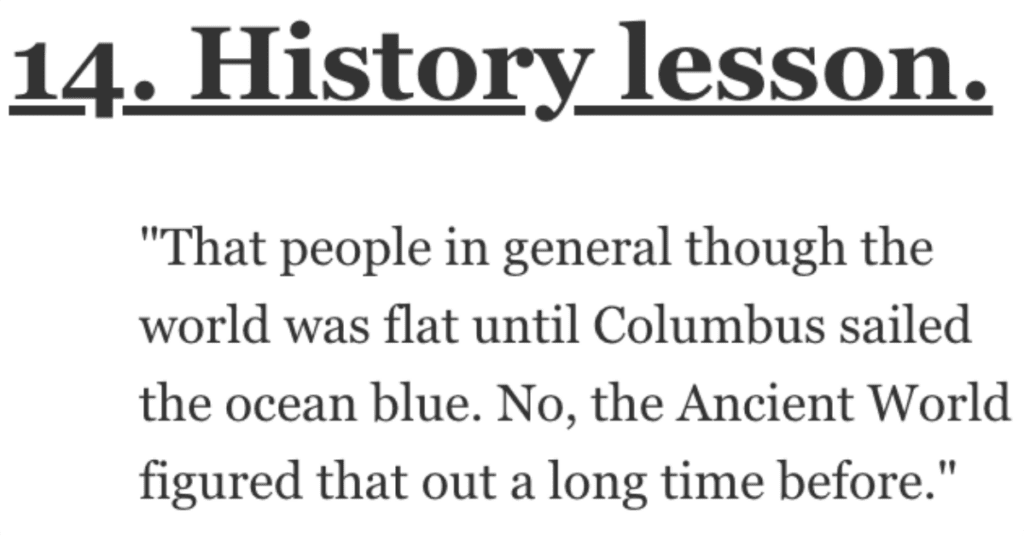 What Myths Are Still Looked Upon as True? People Shared Their Thoughts.

With so much disinformation flowing out there online and from certain influential figures, some of these ridiculous myths and claims are bound to stick around, don’t you think?

But the fact is that myths that aren’t true have been around for centuries.

So what are some that people still believe?

1. What does that logo mean?

“The white on blue roundel in the BMW logo represents the white blades of a propeller against the blue sky, alluding to BMW’s history as a manufacturer of aircraft engines.

This myth was popularized in BMW’s advertising for aircraft engines. (And perpetuated by the movie Finding Forrester.)

In truth, the blue and white come from the Bavarian flag, presented as a circular coat of arms in reverse order to avoid a trademark law prohibiting the use of symbols of state sovereignty in a commercial trademark.

It was only in later marketing for aircraft engines they overlaid the logo over spinning propellers, as coincidentally it could be taken to look like a propeller against the sky. They made all sorts of engines for land vehicles as well.”

“That one I’ve heard repeatedly is “shaving makes your hair grow back thicker.”

I have had lengthy arguments with more than one person about this.”

“That the US spent over a million dollars and two years to develop a pen that could work in space…whereas the Soviets decided to just use a pencil.

In the early days, both used pencils, but since pencils are made out of graphite, and graphite is conductive, snapped graphite particles are dangerous in a pressurized space capsule….to put it lightly.

Fisher, the owner of the pen company, spent his own money to develop a pressurized ball point pen. And cost only about $3.00 per pen.”

“The Myth: You can tell if a snake is venomous or not by the shape of its pupil (slit for venomous, round for nonvenomous).

The Advice: If you cannot, from a safe distance, immediately identify a snake beyond a reasonable doubt, assume it’s dangerous and behave accordingly; keep your distance, stay out of its direct path, and keep your eyes on it until one or the other of you leaves the area.”

That stuff will actually save you, at least long enough for an ambulance to arrive.”

“That Marylin Manson removed 2 of his ribs to blow himself.

I will never understand how this one traveled around the world before widespread use of the Internet for stuff like this. Some of the other ones, sure, they were stuff that sounded medical or scientific were circulated by papers or magazines.

But this one somehow circulated in places that may have never even known who Marilyn Manson was.”

“That goldfish have a 6 second memory.

I mean it’s still not great, I think like a couple months. But still….

Get your fish a bigger d*mn tank”

“Undercover police have to tell you they are policemen when you ask them.”

“Catherine the Great d**d after attempting to have s*x with a horse.

This myth was started by the French.

And then they ask why everyone believes Napoleon was a tiny, tiny man.”

I legit read something that said “Normal people use only 8% of their brains; Einstein was able to achieve what he did because he used 11%. Imagine if we unlocked all of our brain.”

It’s scary how misinformation can be so prevalent.”

“Something about touching baby birds and their parents abandoning them due to the smell of human touch.”

“That Mr. Rogers was a sniper and/or had tattoos covering his arms.

They do, because there are 140 different strains of the HIV/AIDS virus, and getting infected with another strain, especially a potentially-d**dlier one, could be dangerous.

Also, pregnancy is still a very big risk for HIV positive women. If you are considering a s*xual relationship, get tested, and talk to your doctor about birth control.”

“That people in general though the world was flat until Columbus sailed the ocean blue.

No, the Ancient World figured that out a long time before.

People just thought that it wasn’t possible to sail across the ocean to Asia because sailors would run out of food by then, while Columbus thought that wasn’t case because he thought Asia was bigger than contemporary estimates.”

“That people in the Middle Ages only lived to 40 or something.

There was a lot of children d**d, thus lowering the average age.

“People believe in the whole alpha and beta wolves thing.

The “leaders” of the pack are the parents.

In natural wolf packs, the alpha male or female are merely the breeding animals, the parents of the pack, and dominance contests with other wolves are rare, if they exist at all.”

It’s just an old wives tale people use in place of simply telling you it’s annoying them.

“That you can tell if someone is a “virgin” by looking at their hymen to see if it is “intact.”

I recently remembered that in middle school and high school, we believed that you could tell someone wasn’t a virgin if they had a thigh gap.”

“That MSG is very bad for health and anything with it is seen as unhealthy.”

“That E-waste recycling is good for the environment.

Much of it gets shipped overseas to be burned or dissolved in chemicals to extract the precious metals.

The real way to help is to buy less.”

“That washing chicken gets it rid of bacteria.

Cooking chicken gets rid of bacteria, given that you do it well.

Washing chicken, on the other hand, can contaminate your whole kitchen with salmonella.”

“That whole “you eat seven spiders a year” myth.

It was created by some lady in the late 1990s or early 2000s to prove that ridiculous things can be found on the Internet, spread like wildfire, and believed by many.”

“That diamonds are rare and therefore should be expensive.

That is just a myth perpetrated by the De Beers diamond cartel.”

“The Bermuda triangle: Turns out ships and planes disappear at the same rate all over the worlds oceans.

The mystery of how the pyramids were built: They know how they were built. Ramps, pulleys, ropes and labor.”

“That breakfast is the most important meal of the day.

Marketing can do wonders.”

Remember when Columbine was blamed on Marilyn Manson?”

“The Holocaust was mostly unknown until after the war and mostly took place in hidden-away camps.

The writings we have, letters and diaries, lets us know it was actually quite the common knowledge as soon as it started.

We know another thing that is important, that is people who both have documented to be in the know would claim post-war they had no idea. Coping mechanism or whatever but its a thing.

Also a plurality of the victims of the Holocaust were in fact shot over open pits in the places they lived, not gassed. The industrialized murder in places like Auschwitz-Birkenau using Zyklon-B started late. Before that people were shot, asphyxiated with carbon monoxide at several sites or starved.

I think it boils down to people wanting to believe the crimes were unknown and industrialized because they don’t want to comprehend plenty of normal people are capable of accepting or carrying such terrible acts. But they are, we are.”

“That historical armour was useless, or just something you wore so you had a slight chance to turn a d**th blow into merely a serious injury.

Shows and movies still perpetuate this. Game of Thrones has “acclaimed” sword fights where guys casually shove swords through dudes in plate armour. Impossible. Metal is not cardboard.

Even the most basic iron or bronze chain mail armour will be barely scratched by a slash from the sharpest katana. Well-made plate armour is impervious to all damage short of a blow from a specialized armour-piercing weapon (lance, pole axe etc.). Even the earliest guns couldn’t penetrate plate armour.

Armour was incredibly expensive. Common people couldn’t afford it so made do without or, if lucky, with fabric armours (that were still very effective protection!). A suit of custom-made plate would have cost a knight the equivalent of a modern high-end luxury car. Why would people pay that much for something useless?

Armour was very useful. That’s why weapons continued to advanced over the centuries and why armour did as well. It was an arms race.”

Add to the conversation and tell us about some more myths that people still think are true.