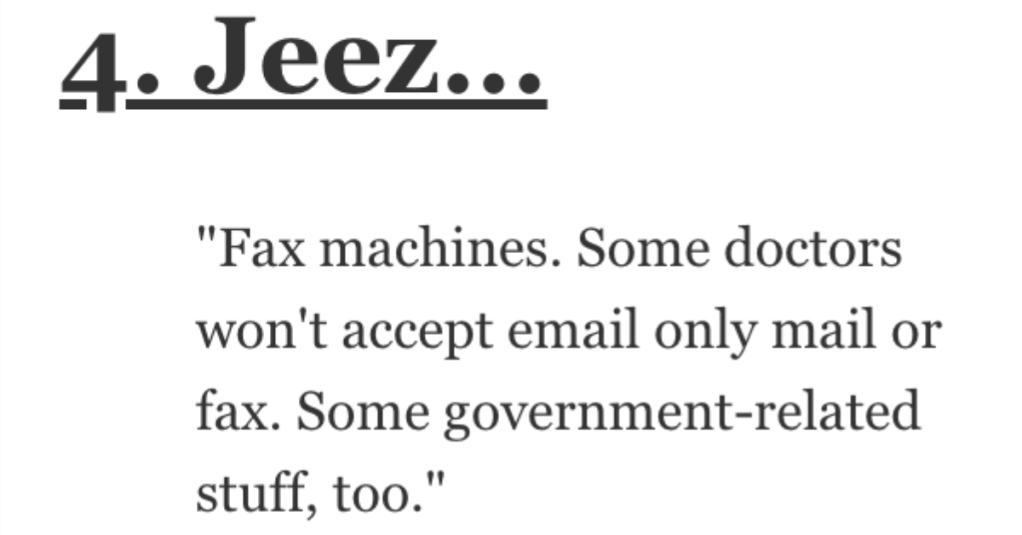 What No Longer Needs to Exist in the Modern World? 30 People Shared Their Thoughts.

We have so, so many things in this world that our grandparents could never have imagined, never mind our ancestors further back than that. We’re constantly innovating, developing new normals, and increasing the ease with which we can navigate this world.

Why, then, do these 16 things still exist at all? We don’t have answers, but maybe you will!

1. Most people can do it themselves.

Tax software in the US. Seriously should just be a simple form on the internet that takes 5 minutes.

The tax code for a majority of people is mostly simple to begin with, as they aren’t itemizing and don’t have all sorts of special shit to include or deduct.

They’re not aiming for simplifying tax code (as hiring enough legal eagles to understand the encyclopedia collection that is US Tax Code also costs them more money), they lobby for us to have to go through them to do things like e-file etc. instead of the IRS and each state just throwing up its own tax prep website. In some European countries since the government has already received info about your wages and taxes already paid, their tax agency just sends you an invoice or a check every year without having to do your own paperwork, that’s what Turbo Tax and others don’t want.

Filing your own taxes

Neverending copyright on books, movies, music and other IP that should have entered the public domain decades ago. Furthermore, having the burden of proof of fair use put on the end user rather than the copyright holder is so one-sided it’s laughable.

Data caps and throttling on cell phones. The current infrastructure is more than capable of accommodating everyone without restricting bandwidth.

Gas cans that seem deliberately designed to not work and that spill gasoline everywhere.

Some doctors won’t accept email only mail or fax.

Some government-related stuff, too.

For real, we have e-fax. So the fax comes in electronically. You know, like an email. Except it’s sent from a fax machine. And visa versa. “E-scribing” is literally just electronically faxing from computer to computer.

5. It really blows your mind.

The fact that some people still don’t have access to fresh water.

7. Having to call anyone I swear.

Having to call to cancel a subscription you signed up for online.

If you can sign up for it online in a few clicks you should be able to cancel online as well.

Weekend and holiday delays when moving money around in the banking system. (Do the computers get PTO?)

TBH…a lot of old nonsense of financial system thats just carried over from decades ago.

Having no idea how much you’ll pay for a minor medical procedure.

I saw a Ted Talk once about someone trying to build an online resource to shop around your medical procedures and explained this problem, well, more like brought awareness to it. They had said hospitals especially would refuse to answer the cost of any procedure and had to build their database from crowd sourcing, which few people are willing to share their medical procedures as it is. Then they found that many places charged different prices for the same procedures for different people.

Medical anything shouldn’t be this complicated for patients.

This is gonna be a little unpopular but Everything being subscription based. Use to be able to pay a one time payment and you’ll be good for the rest of the year.

Even if something is monthly they would have a way were you can pay for everything at once. Now they don’t have that.

There is one fibromyalgia one that I will never forget. Some lady is gently canoeing down a river and then she turns to the camera and matter-of-factly says “With less pain, I feel better.”

It’s because hi-res video takes up a lot of storage in a hard drive.

The gas station on the street corner doesn’t have 15TB of storage to back up the past 2 weeks of 24/7 4K security footage. They have to cut their losses and stick with 480p (or even less).

I’m in that position right now…salaried without seniority, and got handed a bunch more responsibilities because someone left the company. They also won’t be replaced. And I’ve been told that I’ll have to work an extra 10 hours/week without a raise, because it’s “just part of the job”.

Looks like they’re gonna learn the hard way that’s a good way to lose 2 people at once.

14. And no better options exist.

Service fees on concert tickets. Especially when they’re like 40% of the ticket price.

Or when ordering food online. Chipotle literally adds a service fee to “help offset the costs of digital convenience” when you order through the app.

How everyone collectively continues to use Uber Eats and all the other apps is beyond me. Always a problem. Comments (e.g. include cutlery) are ignored. Local fee. Service fee. XYZ fee. An insane markup from the actual, original price on the menu. Uber Eats customer service is so damn bad, they randomly decide when they just want to stop responding, refuse to listen when experiences were bad, etc. Why do we keep supporting these apps?!

Taking 3-5 days to put money back into my account after you took it instantly.

Having to call to make bill payments.

Yesterday I called and the lady said there is a $10 charge for doing it over the phone. So I went into the bank today, and all I did was stand there while the teller clicked a few buttons and it took the money from my checking to pay off the loan.

Like why did any of that need to happen just automatically withdraw the money like before. What makes it worse is the last payment was less than my normal payment.

Telephone/SMS network stacks which can’t tell you anything about where a call or message came from.

They also allow source numbers to be easily spoofed, and provides no security features at all to block unwanted calls or texts.

We already pay these companies enough for their shitty service. Get with the f**king programme.

19. There’s definitely a reason for that.

Or the fact that I have to go to my local gym to cancel the membership.

Best of all, it’s a chain. Like a full on big brand chain. And when they closed the branch near my old place, they just automatically transferred me to the next closest branch. But I can’t go to one close to my current place because I have to go to my “home branch”.

Funny how the transfer is super easy and done electronically but they can’t cancel my membership at any branch.

Junk mail, just filling up the mailbox with crap.

And going straight to the trash/recycling.

LEAKS IN YOUR BRAND NEW HOUSE YOU BOUGHT YESTERDAY

Buy a house they said! It’ll be great!

All fun and games until you get your first leak!

22. We all understand the emphasis.

Or gray hair! I should not have gray hairs and acne at the same time.

24. It’s because they don’t actually want you to do it.

Mail-in Rebates. In the age of digital everything, it’s ridiculous that these things are still around.

I think it’s to make it harder for people to actually get the rebate, but they can advertise the lower price of the item. There’s a form, you need the receipt, have to get a stamp, envelope. And an expiration date that it’s easy to miss.

Then the company gets to not pay out. But yeah it’s bs.

Paying $4.99 delivery fee to the pizza place, and they say DELIVERY FEE IS NOT A TIP FOR THE DRIVER. The drivers use their own cars and pay for their own gas, and they sure as hell aren’t getting any of that $5.

I work for USPS. Went to request a day off and the form required carbon paper to copy.

No amount of technology will cure government agencies of unnecessary red tape.

E-ticket processing fees. Seriously, do these have any function other than making money for some middle man?

A lot of the things in this thread are just business practices that they do to make more money. Extracting profit is the reason behind most of this bullshit. They don’t care if people hate it, they’re still getting more money this way.

I scrolled this whole f**king thread and didn’t find the most obvious of all answers:

I don’t even get any other type of call, yet I still get this crap daily.

Convenience fees being applied when you pay a bill online.

Under California law, it’s illegal for a landlord to require cash and/or electronic deposits as the sole methods to pay rent. Landlords must allow a tenant to pay rent using at least one of these other options as well: check, cashier’s check, or money order.

I never honestly thought about some of these, but I have to agree.