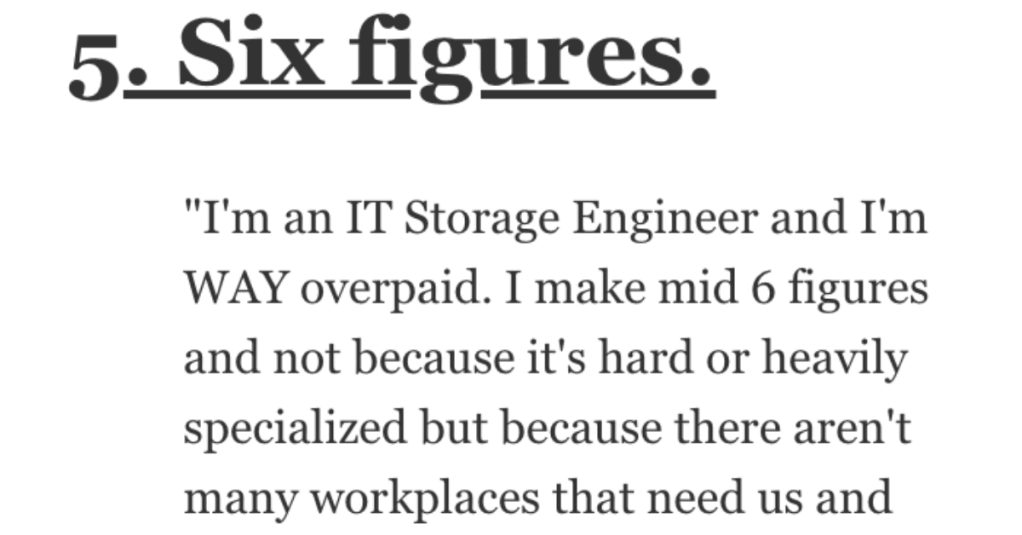 What Occupations Do You Think Are Overpaid? People Responded.

What jobs out there overpay people?

Let’s see how AskReddit users responded to this question.

When my family moved cities when I was 5 our new neighbours had kids the same age as my sister and I so my dad wanted to meet them (he did not want his girls around weirdos).

When he met the mother she asked what he does and vice versa. She told him she’s a life coach. His response was “what the hell is that?”. She stopped letting her kids play with us.”

“One night I babysat three kids for about 2 hours or so. The kids went to bed when I got there, and the parents had left dinner out for me, so all I did was eat their food and watch their TV and pet their dogs.

When they got home the mom paid me $100. I told her that was way too much. She slurred “Don’t worry about it, I’m d**nk.” And then I noticed her fly was down.

So that was the most over paid job ever.”

“My last job in college, before starting my career. I was an overnight shelter staff for transitional housing.

Since these clients were basically back up on their feet by the time they arrived, they were pretty self-sufficient. I was paid about 25% higher than other night-shift jobs I could get at the time, and on most nights all I had to do was make one pot of coffee.

The rest of the time I could watch TV, play video games, do personal chores, etc… The one job that I know was better was their overnight sleeper, since we had to have two staff at all times. As implied, this dude made a well-above minimum wage rate to just sleep there on the weekends.”

make copies for professors when they asked (only one every asked)

This was 8 years ago and I was paid I believe around $11 an hour to essentially sit on my phone and do my homework. I’m not saying the pay was great, but I definitely wasn’t doing anything to earn it.”

“I’m an IT Storage Engineer and I’m WAY overpaid.

I make mid 6 figures and not because it’s hard or heavily specialized but because there aren’t many workplaces that need us and when you do, there’s very few of us around.

It isn’t advertised often and there are always more positions out there than there are people. An example in my country is that the available storage related jobs can fit on 2-3 hands BUT the number of people qualified to do the job can fit on one hand and I’ve worked with all of them.”

A lot of them are scumbags, especially in Florida.”

They do all the work and I just sign off on some decisions every couple weeks.

Everyone loves me because all the work they do and I watch YouTube/Reddit all day.”

My DevOps jobs pay around 200k – 250k a year, they get 10%-20% of that for making some calls and setting up meetings with hiring managers.

Come to think about it, I am also overpaid for my job.”

9. Thoughts on this one?

Realtor: ‘sells’ house in couple of weeks by sending couple of emails, gives tour of house. “Yeah, like I’m gonna need like 5-10% commission of that 30 years.”

“I work in digital marketing as an account manager.

We generate leads off co-registration sites like the c**p where you can win a gift card if you spin the wheel then answer a million questions and your data is sold 10 times. It’s all bulls**t and I have no idea why it pays so much.”

“My mom once got a job as a civilian contractor working for the federal government.

She was an accountant, and they put her in the department that managed a certain kind of ICBM… that had just been slated for destruction as part of one of the big arms-reduction treaties in the mid-80s.

She had a computer at her desk but didn’t have login info to use it, so she spent her days doing crosswords. Whatever that job paid, it was definitely overpaid.”

They are the people who spent two years in the classroom, couldn’t handle it, then started some online blog/following with some appealing catchphrase.

They get paid $3000+ per speaking gig that districts fork up and force teachers to listen to.”

And cater your f**king lunch? And nothing is going to be on time for my f**king client because your documentation is all a** backwards?

In other news, I’m in the middle of a very stressful construction project at work…”

And in the US 40 out of 50 states have a college coach as the highest paid state employee.”

I’ve known several of these guys that go door to door after every storm, tell the homeowner it’s $0 out of pocket, send their insurance info to their office people that are specialists in getting insurance companies to approve the claims, and send the homeowners contact info to their operations guy who schedules the work and manages the contractors.

Every one of those guys made well into the six figures. It’s my backup plan for when I burn out in project management one day.”

I’m basically a professional spam artist. In the past I was at least doing 25 hours of work a week. Now I don’t work at all, I just show up to my weekly meeting with my boss.

This company hired me to build out a strategy for finding new business (AKA cold calling and spamming people). For most of my time here, I actually tried and put in a solid effort and did well.

Then everything just kind of dried up. It’s like everyone who’s interested in our product already talked to us. The rest either aren’t interested or use a competitor or whatever.

But I’m getting paid to continue spamming these people so what the hell. Well, one week I went on vacation and realized that by doing nothing, I saw the same end result as working hard. Which is… no progress. So I dialed back my efforts to 25 hours a week. Then 0. Because even with no results they just keep me on!

That said, I know they’ll run the numbers for 2022, realize that I’m useless, and let me go. So I’ve already planned an exit to a real career that I’m excited about. I was just using this job to make money while I figured out what I actually wanted to do anyway. Now I’ve figured it out and landed a dream job for me.

I did enjoy getting paid to do nothing for a while but it gets boring. People need a purpose to start the day, so I’m happy to start a job where I’ll actually be useful to the team and to society in general.”

“From personal experience, many people in the oil industry.

I don’t understand why we keep giving the industry $20 billion/year in subsidies when its already so bloated with overpaid old men. Oh yeah, because the oil industry uses their taxpayer funded bloat to openly, legally buy members of congress to keep the gravy flowing from the government into private pockets.

The kicker is that so many people in the oil indistry are blissfully unaware that their salaries are supported by government handouts.”

“I got paid $46 an hour once to juggle in parades for Vail resorts.

Honestly, it was way too much but I couldn’t turn it down because I was making $10 an hour as a ski/snowboard instructor.”

They’re the commuter rail and subway people who check tickets and open doors for people to get on. I won’t list the full list, but you can look up every employee’s pay because its taxpayer funded.

A lot of ticket checkers make six figures with overtime. The highest paid made over $150k with overtime a few years back. The people who drive the trains make between $200-300k annually. This is largely taxpayer funded…”

I know most of them don’t get rich from the job itself, but the amount of money and amenities they get from constituents is f**king ridiculous.”

Not amazing pay per year but the work is easy and the work/life balance is great.”

I know the vast majority of “influencers” are the type who just want free s**t and have 2000 followers but these super popular ones essentially get paid millions of dollars to take often misleading Instagram pictures (just look into Jameela Jamil’s ongoing beef with the Kardashians for an example) and still either demand free s**t or get given free s**t, as if Kim Kardashian can’t afford to just buy her own hair products.

Another one (and this is unpopular) but professional sports. I understand actors or musicians or (rarely) authors getting paid millions of dollars. They spend months or years working on a product which can be enjoyed over and over again. Professional Sports players make more money than the majority of people in those fields to, essentially, play a game.

True there’s practice involved but I struggle to believe that being a footballer is more taxing than being a nurse doing a 48 hour shift, or a NICU surgeon who has to tell a struggling family how expensive the surgery that will save their child’s life is, and yet they get paid more by orders of magnitude.”

“The whole entertainment industry, at the top end anyway.

I’m including those in the arts, television, movies, music etc and the sports fields.”

“People who are “solving” homeless problems, their salary is over 200,000 a year.

There is still tons of homeless in L.A.”

Are there jobs out there that you think are overpaid?

Talk to us in the comments and share your thoughts.