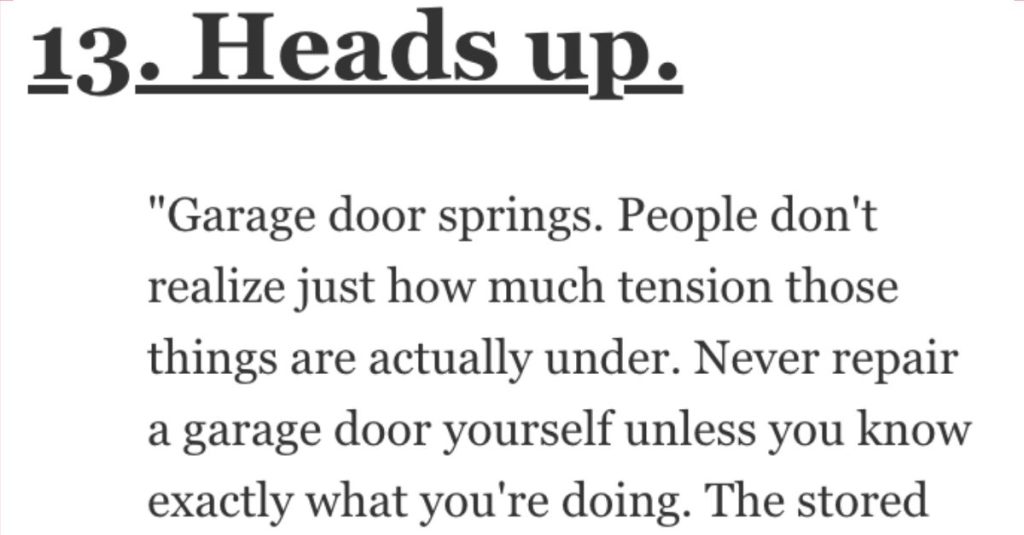 What Seems Harmless but Is Actually Very Dangerous? Here’s What People Said.

Those cute creatures may look adorable and soft, but, from what I’ve been told, they can be vicious and they can make you instantly regret getting close to them.

People on AskReddit talked about what looks harmless but is actually really dangerous.

So you better pay attention!

“Having a small snack before a medical procedure that requires anesthesia.

Intubation can cause you to throw up your food and you can choke.”

“Pool covers. It’s like being wrapped in a bedsheet underwater. You cannot get free and you cannot scream for help. Once you’re in the only way to get out is to be incredibly lucky and get free or have faith that someone saw or heard you fall in and hope that they get you in time.

“Having a loose animal in the car.

A safety instructor once told me doctors had to dig dog bones out of a person after it got between them and an airbag.”

People think they’re so much fun to stand around and play with.

You fall into one of those things, you aren’t getting out.

The waves will just bludgeon you against the rocks until you d** or you’re lucky enough to drown first.”

“Kids picking flowers in the park. I am a conservation

Technician for a county park system, at least once a year I have to stop parents with kids picking flowers off the trail because I see kids with either poison hemlock (one of the d**dliest plants if ingesting even a tiny amount) or wild parsnip, which can cause some serious permanent scarring, burns, and boils if the sap gets on to your skin and is exposed to sunlight.

“Confined spaces, above ground or worse, below the surface.

If you do urban exploration, caving, or anything like that, get a 4 gas detector, clip it to you chest or belt, and set the alarm to max.

“Not checking / changing the tires on your car.

Someone back me up on this.

You can’t just drive around with the same tires on forever.

Eventually you’ll end up doing donuts in the middle of a wet interstate because your back tires lost traction.”

“Eating raw or undercooked kidney beans can make you very sick or even k**l you.

It only takes like 3 undercooked kidney beans to ruin your day.”

9. Could be very harmful.

“Small cuts you get when doing marine stuff.

If you are diving/snorkeling at a coral reef and lightly scrape yourself on some coral, for the love of god disinfect the living s**t out of that, no matter how “mild” it looks. The bacteria on coral will literally eat your leg off.

Having small cuts on your hand while handling stuff like diatomaceous earth or sea sponges can cause tiny glass spines to enter your blood stream and poke tiny holes in all those blood highways running through you.

While this is a bit of a he-said she-said story, my professor apparently had a student hospitalized and d** due to massive internal bleeding issues from handling this s**t day after day.”

“Walking along the train tracks.

It’s crazy how fast millions of pounds of freight can sneak up on you.”

I had a teenage girl come from Home economics class. She was sewing and had a pin between her lips.

I mean , who hasn’t done that? She sucked it in and it got lodged in her throat. While waiting for a scope she felt it dislodge and went deep into her main bronchial. She required major surgery.

Had a young boy running with a toothbrush in his mouth. Got jammed way deep , almost hit a major artery.”

I worked at a kindergarten and one kid was sometimes super sweet but sometimes really mean. He could switch in a second. While I was naming the colouring pages they were about to get he walked up to me and bit me in the arm. Didn’t think it was through, cuz no blood.

But it started swelling and getting red and the marks were clearly there. Went to the doc right after my shift. He explained a human bite is the second most dangerous bite there is. Got antibiotics but they didn’t work. Arm just kept swelling and getting completely dark purple over two days.

Doctor sent me to the hospital where I got strong antibiotics. Basically everything in me was cleaned with that s**t, felt weak for months. If it didn’t start working by that night is have to come back and be hospitalized to get my underarm removed. I’ve shat some bricks there.

Never thought a kid’s bite could cause this. Luckily the swelling got less and the bruise stopped spreading so I still have my arm, but that was very close.”

People don’t realize just how much tension those things are actually under.

Never repair a garage door yourself unless you know exactly what you’re doing.

The stored energy in them is enough to break bones and sever limbs.”

“Pushing someone’s face into a cake as a joke.

Some cakes have little wooden spikes inside to support the cake.

Saw a post where a girl’s face was gored by one of these.”

“Putting your feet up on the dash while riding as a passenger in a moving car.

You do NOT want to see post-accident photos of what happens when someone is in that posture in a surprise head-on collision.”

You might think one isn’t serious because it’s not bleeding much, but that just means the wound isn’t flushing properly – if you get seriously bitten by a cat, it’s very important to go to urgent care so they can properly disinfect the wound.”

17. Surround yourself with good people.

Most of the time they only do dumbs**t that affects themselves but when they do something that affects you it can change your whole life.

So just remember if you’re in with a group of imbeciles you’re rolling the dice with your life every second, its like standing in low-grade radiation, its unnoticeable right up until it’s incurable.”

“Those black foodstuffs with charcoal in them.

Charcoal interacts with a bunch of medications, gets in the way of nutrient absorption, and can really upset your digestive tract.”

2 or 3 inches of water is all that’s needed to sweep you off of your feet if it’s moving fast.

12 inches of water will lift and sweep away a car.

Water is heavy and will f**k you up if you don’t respect it.”

“Changing lanes without leaving a proper gap or checking your blind spot and signaling your intention.

On the surface it seems fine because, hey, you’re going faster than the person you’re passing right? Nope, all it takes is something like a deer to completely f**k your world sideways.

When passing anyone always wait to get into the lane they were in until you see their headlights fully in your rearview mirror and have cleared your blind spot. It’s even more dangerous to do this to a semi, your car will be eaten if it hits you.

Always, always, always visually check your blind spot. Always. Blind spot sensors are not an adequate substitute for a visual check. You’re asking for trouble if you don’t make sure someone hasn’t popped in there.

Use your dang turn signal. Other drivers are not mind readers, signal your intent and follow through with it.”

Even if it seems safe for yourself to do so it’s probably very dangerous for the animal you feed.

It’s very likely that feeding a wild animal may lead to it’s d**th.”

By itself it’s perfectly fine, but a lot of people aren’t aware that grapefruit juice specifically has interactions with a LOT of different drugs, both medical and recreational, and can be potentially very dangerous when combined.”

“Taking pictures of bears ( apparently it looks harmless to people in Yellowstone ).

Bears are faster than many expect especially uphill so if you are ever near a bear and want a picture stay in your car to do it.”

There was an optional, hour-long class I took my freshman year about STIs. I took it by accident and it was simultaneously the most traumatizing and important class I’ve taken in my life.

Knowing of STIs isn’t enough, seeing pictures, learning about each one, as well as how they get transmitted, that’s important.”

This drug is fine within the recommended doses but it is ubiquitous in a lot of OTC medicines and so easy to take too much.

This is potentially damaging to the liver. Intentional overdoses are fatal.”

“Horseback riding or biking without a helmet.

Sure helmets suck and don’t look cool, but you gotta protect those BRAINS.

And soooo many people just don’t.”

In the comments, tell us what you think looks harmless but is really dangerous.