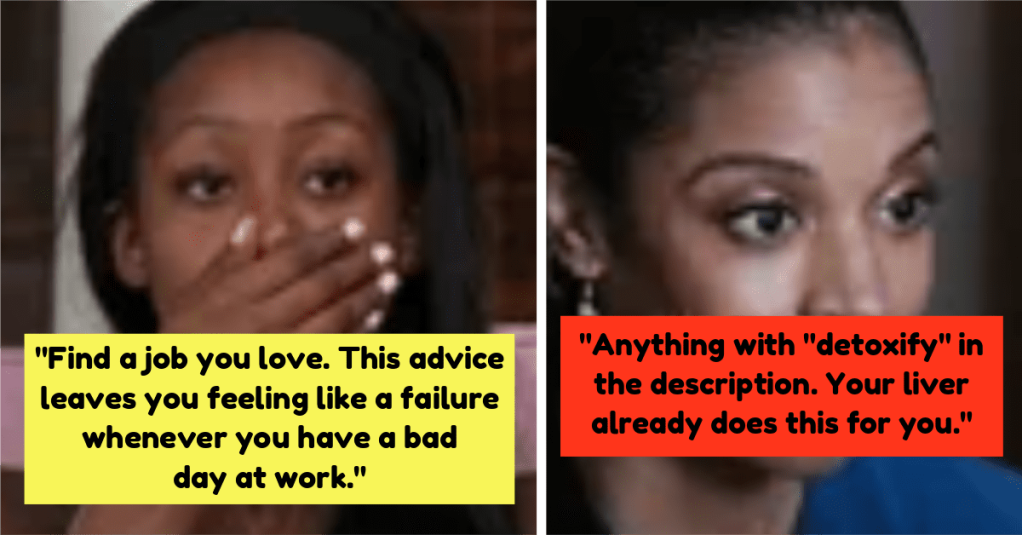 What Self-Care Advice Is Actually Bad for You? Here’s How Folks Responded.

Have you been doing some self-care? Thinking about doing it? Wondering wtf it even is?

Well, be careful. Because not all pieces of self-care advice are created equal.

What’s some popular self-care/self-love advice that is actually really toxic? from AskReddit

Reddit’s got plenty to say about it.

Though you should know that a lot of these posts were followed up by edits and caveats, so, obviously we’re not dealing in universals here.

Sometimes love can be toxic, and maybe the correct decision is painful.

Maybe it pains you to leave someone. Your heart shouldn’t rule you.

“Myself” is a guy who likes to work minimum wage, part time jobs that require no mental input, and then spend the rest of his time playing video games and eating junk food. He’s overweight, underpaid, and has no interaction with his friends or family.

First of all, even a job you love is going to suck…often. That’s why they pay you to do it. This advice leaves you feeling like a failure whenever you have a bad day at work.

Plus, there’s a lot of value in working for a living and finding your satisfaction at a more personal level.

Anything with “detoxify” in the description. If you have a liver you already do this.

A juice cleanse isn’t going to make up for your bottle of vodka and may even make it worst.

Motherf**ker I’m short, bald, ugly, and I have chronic pain.

My body betrays me at every turn. F**k that guy.

6. “All you need is the proper mindset”

First of all, screw to the ever loving gates of h**l whoever thinks this is all it takes. I am 100% aware that mindset is probably the most important variant to being happy and successful, but some days suck and to minimize every problem to this completely dehumanizing. Sometimes your dog d**s a week after you lost your job and you have to realize that any amount of mindset wouldn’t help you be a better you in 7 days or whatever these mindset coaches are saying

Don’t get me wrong, I am all here for personal development. I actually work in marketing and there is so much of that in the entrepreneur world. In general they help way more then they harm BUT that doesn’t excuse the heartless way they deal with the people for who their pre-planned coaching plan doesn’t work. Since they are not trained mental health care professionals, they can’t help the person actually find the right kind of help and it can lead to this person losing control and spiraling into psychosis. These coaches don’t care, mindset and money that’s all.

Anyways, if you are one of those people who SELL (not just think but sell the whole philosophy) that all you need is the proper mindset and you can get anything, burn in h**l, people who d** of s**cide because of your cult like techniques are blood on your hands. Rant over

7. “Anything is possible if you work hard enough.”

No! Not everything is possible.

You’re not going to be the new nelson Mandela, f**king president of the USA or the new pop-artist.

I’m sorry to tell you but it’s true.

8. “No one can hurt your feelings without your permission.”

Bulls**t. If someone I care about says something offside, OF COURSE I will consider it truth until I prove otherwise. That’s just respect.

I’m not going to blindly assume everyone is wrong if they say something that hurts.

I think that advice is trying yo turn people into sociopaths.

I’m sorry but this just sometimes isn’t an option for people. And I think most people understand this to be the first step to trying to deal with anxiety before it gets more severe.

These kind of situations the focus should be more on how to have better handle that stress had a better recognize that emotion and finding positive methods of distraction and subversion to help keep them from hyper fixating on it. Obviously I’m not a medical professional and you’ll find better resources online about dealing with stress stuff but my main point here is that the advice of just removing the stressor from your life is not only unhelpful but frankly a bit insulting to the intelligence of a person receiving the advice

This is something people learn real young and what it amounts to is an attitude that “your dreams” are the only valid path, and anything else isn’t acceptable. People have no idea what everything entails practically, especially as they are learning, and at best you get real lucky and what your dreams are is also something you excel at, at worst doing anything that you didn’t view as your dream job is crushing, and most medium it gets you to not try out other things and try on different kinds of tool belts in any serious manner.

“Follow your dreams” gets people to be inflexible, to not entertain more experiences that could actually provide contentment and satisfaction, and worse to potentially sink massive time and resources on this inflexibility, all the while adding to a sense of personal failure or a false impression of unfairness.

11. “Surround yourself only with positive people.”

Advice to Surround yourself only with positive people, if you’re willing to cut people from the your life when they are a bit down, that’s a recipe for people hiding the negatives in their life from friends, only discussing the positive and having mostly superficial friendships, for fear of you being cut out of their lives.

Sometimes the “h**ers” are people who love you and want to warn you of potential pitfalls (such as MLMs, cults, abusive relationships, etc.)

Its not really advice, but its popular for people to label themselves as “brutally honest”.

Honesty is good, but beware of people who are more interested in the brutality than the honesty.

“stop texting people first to see who your friends are” what if they’re doing the same thing and you just ended a friendship due to a misunderstanding?

As a child of abuse, there are absolutely wrong ways to parent. Frankly I’m of the opinion that the majority of chronic mental illnesses are the result of sh**ty parenting practices because sh**ty parenting can f**k up every body system.

Every parent should consult a child psych professional just like they consult a pediatrician about their child’s wellbeing. They’re professionals who have the education to read research studies regarding child development and can direct a parent on how to raise a healthy child.

This advice is everywhere.

No, oftentimes our feelings require introspection to work through them and make positive change.

I have a friend who is very sucked into the “girl boss” subculture that has her working all hours on a business that makes no money, then doing “self care” in the form of spending the little money she makes on manicures or expensive beauty products that other people have told her are self care.

Self care and self love is sometimes admitting that you need to stop perusing something that isn’t working and is making you miserable, even if it’s what you thought you wanted and even if everyone is telling you to keep going and not to give up.

18. “Cut off anyone that doesn’t bring you peace”

Obviously this applies to people who are constantly, deliberately making you miserable.

But a stressful situation or argument with a friend that you care about doesn’t count if you haven’t attempted to work it out with them.

Pretty sure it was Wayne Dyer who published this nonsense in the 80’s.

Having at least some guilt is a good sign that you’re not a psychopath.

No, sometimes you’re the a**hole. 9/10 the common denominator rule stands.

I agree, don’t give a f**k what people think if you enjoy a certain type of music. But do give a f**k about how your actions affect other people. Unfortunately, it seems that many people just take it to mean “don’t care that you might hurt other people.”

In order to self-care and self-love, it is important to consider what consequences your actions have on the world around you.

People use it because they think it’s uplifting but it’s actually quite dismissive.

A positive attitude can get you a long way but so can acknowledging and letting yourself/others feel emotions.

24. “No one is too busy to talk to someone they care about”

This is so toxic to expect people to talk to you EVERYDAY.

Yes, sometimes people have other stuff going on in their lives. It doesn’t mean they don’t care.

Some people have gifts and talents that other people don’t.

That’s the reality, and even though hard work will get you far, there are points where you need to acknowledge that you won’t be the best at everything, even if you love what you do.

And you aren’t cut out for every vocation.

The girls who are always posting about “Treat yourself” or “If he doesn’t treat you like a (queen emoji) it’s time to find a new one” … nah one is bad financial advice if you know you can’t afford something don’t do it, and the other is not how partnerships work.

You should be each other’s best friends, not worshipped like he’s your subjects desperate for your approval. If your ideal relationship is one of superiority instead of equality then you probably have mental health issues.

Astrology? I’m glad it gives you comfort but if you start basing life decisions on the “effects” of the stars, you’re probably going to have a bad time.

The advice being quoted in here are toxic when taken as absolutes.

It’s not bad advice if you take use it as one viewpoint among many, and balance it out with others.

Burning bridges and cutting people off/ghosting them with no explanation because you’re no longer getting what you want out of the relationship and “you don’t owe them anything.”

Ok, it’s one thing if we’re talking about an abusive relationship, but this mentality seems to promote childish, conflict avoidant behavior masked as “self care” aka “good vibes only.”

30. “Never have a negative thought about yourself.”

For me its the physical self-esteem and appearance issues, and the whole “Don’t ever think a negative thought about your appearance or want to change an aspect about yourself.”

I’m a natural ginger. Pale, red-cheeked, freckled, the whole deal. Another thing that comes with that is a have completely invisible eyelashes and eyebrows. If I don’t have makeup on it genuinely looks like I have shaved my eyebrows and eyelashes off. For years I h**ed this, and was just waiting for the day I learned how to fix it. Eventually, I got my makeup done and it was the most beautiful I’ve ever felt. All it took was some mascara and eyebrow pencil.

I realized then and there that I was never going to go back to having my natural face. I started wearing the same three makeup products every. single. day. Mascara, eyebrow pencil, and eyeliner. Then I became upset that I couldn’t go without makeup without feeling naked, so I started dyeing my eyebrows and eyelashes, and it was life changing. I always feel guilty about only feeling confident after I “change myself” but frankly, thats nobody’s business but my own.

You shouldn’t teach people that they have to love their natural appearance no matter what, you should teach them that they deserve respect no matter what their appearance is. I don’t like my natural facial hair color, but if someone were to insult it or belittle me because of it, I know that I don’t deserve that, and my face is perfectly acceptable the way it is, even if it doesn’t fit with my personal preferences.

What’s the worst bit of advice you’ve ever received?