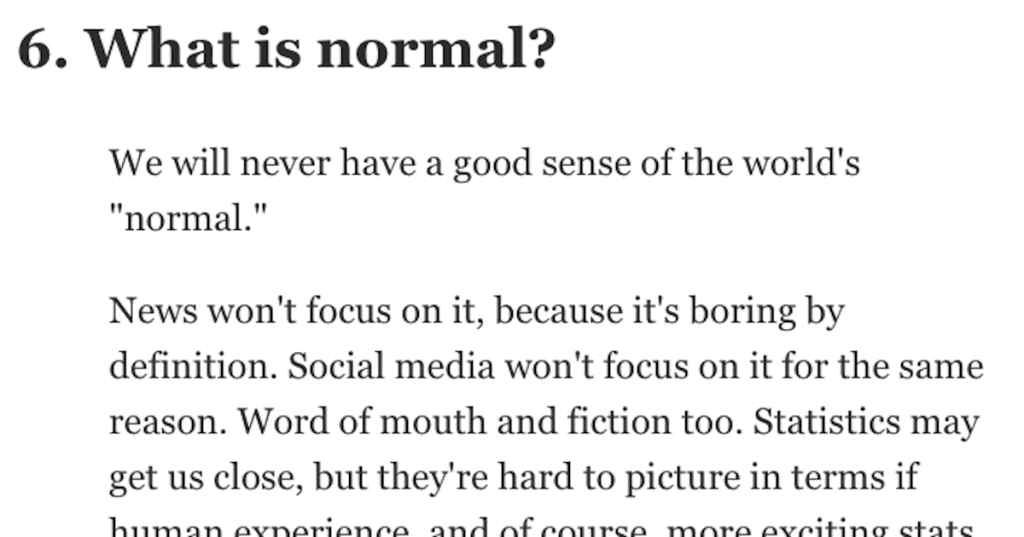 What Truths Are People Not Ready to Face? Here’s What 30+ Folks Had to Say.

As a whole, humans have a great talent for not facing the things they know in their guts they’re not ready to know or see or understand. We can be extremely willfully obtuse when we want to be, and it’s probably one of the things that keeps us sane.

These people are ready to burst some bubbles, though, by sharing things that humans shouldn’t try to dig into deeper, because we’re for sure better off clueless.

Closure is an unrealistic expectation.

For me closure is something you give yourself, otherwise you will be emotionally stuck forever. Learnt that the hard way.

No matter what you do for a living, there will always be “That Person” that nobody can figure out how they got hired or why they are allowed to continue working there.

I remember seeing a post on Reddit that seems to answer it. It basically says that to keep most jobs you just need to tick two out of three of the following attributes(I might have misremembered 1)

You actually show up on time. Your work is good/up to standard is not the worst and passable. Your colleagues and bosses like you don’t hate you the most out of your colleagues.

For the vast majority, when we d**, our precious life will be quickly forgotten.

I don’t think it objectively matters, but it is very depressing to think about, at least for some people.

4. Smart people need to be louder.

The loudest among you are mostly a bunch of wankers. Unfortunately you usually let them lead you.

5. The big and scary truth.

Humanity is the largest threat to itself. Not some natural disaster or outside invasion. We will kill ourselves off at this rate.

We will never have a good sense of the world’s “normal.”

News won’t focus on it, because it’s boring by definition. Social media won’t focus on it for the same reason. Word of mouth and fiction too. Statistics may get us close, but they’re hard to picture in terms if human experience, and of course, more exciting stats get repeated more.

Our view of the world outside of our own personal experience will always be shaped by the outliers, and there’s not much way around it.

7. Eh, we’ll run out of space for graves eventually.

For most people the last thing left of them will be an eroded name on a headstone.

8. No matter what you think.

In a large scale natural disaster we are all pretty f’d. Imagine a scenario with no power, no cell or internet communication, etc. for an unknown or even infinite amount of time. Very few would ever be “ready” for such an event.

I think the pandemic showed us pretty clearly, the majority of people can’t handle being even SLIGHTLY inconvenienced, let alone doing without or changing their habits.

What would be more alarming is that climate change is very real and we are experiencing problems. I’m a buyer for a grocery store and it’s becoming increasingly difficult to secure produce. Not all produce but some. Between draughts in California and flooding in the Midwest, and everything in between, it’s disrupting our food supply.

What’s more, is inflation is causing food prices to rise which will eventually be funneled down to consumer. In some places, food is rotting in the field because there’s not enough people to pick it.

I know people want to say “well there’s enough literature to survive without the internet” but the reality is, most people aren’t able to live without a grocery store to provide their food. Yes people will learn to grow food but not everyone, and not everyone will be able. Seeing the panic buying from the pandemic, first hand, was traumatic. People lost their god damn minds when they could only buy 4 chickens instead of 6.

Frankly, people are not ready to live with less, at least in the US. Telling that same person to just add more vegetables or bread to the chicken meal, would’ve started ww3 because people are THAT entitled.

Additionally, most people do not realize how much actually goes into growing food. People in the Midwest bitch about strawberries coming from Mexico when it’s January. Like people don’t understand, food is seasonal and it’s only through modern marvels and technology, they’re able to get strawberries, in January, in Michigan.

Are you special? Maybe a little bit.

Are you as special as you think you are? Certainly not.

I’m far dumber than most people I know. Does that count?

(First person to say “BuT yOu ReCoGnIzE Ur FlAwS, uR nOt ThAt DuMb” is getting flipped off from behind a phone screen.)

We’re pretty far from understanding how the universe works.

Take it a step further: there’s a good chance that humans simply don’t have the capacity to fully understand the universe.

A monkey will never be able to comprehend calculus, macroeconomic theory, or how a car works. It makes sense that we too have an intellectual ceiling that will prevent us from ever understanding how the universe works.

sometimes you can be wrong!!

And it’s ok to be wrong.

The air in chip bags is important.

They replace the air (which contains oxygen and water vapour) with nitrogen so the chips don’t get soggy or oxidize.

And they “over inflate” the bags on purpose to cushion the chips from crumbling during packing / transport.

We are all going to d** and somebody has out pizza’d the hut.

Most people simply don’t care about the things you’re passionate about no matter how much you try to convince them that they should be.

As I’ve gotten older I’ve had to learn that my friends don’t find joy in the same things I do. It’s nothing personal.

I find the fact that humans are mammals very comforting. It explains so many off-putting things. I look at them and think, “This is just a mating display,” or “This behavior maximizes the number of their potential offspring.”

When I look at people this way I never feel disappointed by them, or angry at them. We’re all just mammals, doing mammalian things.

Much evil not only goes unpunished but is rewarded.

Not only that but a lot of evil behaviour is rewarding itself for many people.

One of the five truths: we will grow old, we will get sick, we will d**, all we know and love will change and all we can possess are our own actions. Any given day one of these will zing you more.

When we come to accept them, we simply live an easier life.

It is reasonable to talk instead of fight.

As an extension of this: apes together strong.

There was no logical reason for Scrubs Season 9.

I just never watched Season 9 and so now I always talk about great the ending of Scrubs was. Season 8 really ended perfectly.

That fear influences every decision that humans make.

The human race will be extinct someday, and other plants and animals will flourish on earth long after we’re gone.

We’re not killing the world, we’re killing ourselves. The world will go on. Life will go on.

Actually humanity is overdue to hear that.

We are going to have to learn how to deal with and accept our differences, because unless we can work together to pool our intellectual resources humanity is doomed to d** on this planet either in the near future, or in the far future.

People don’t want democracy they want a dictator they agree with.

The only downfall to democracy is that it gives an equal voice to anyone no matter how unreasonable or traitorous. If everyone was participating in good-faith with only the good of the nation and EVERYONE in it, it would 100% be the best.

Unfortunately, we live in a world where people would cut off both their legs if it means their ‘enemies’ lose a single leg.

It’s normal for humans to be lazy. We didn’t evolve to be perfectly efficient hive insects.

To piggy back on your point: all personality traits served a logical purpose for survival. Laziness is huge for energy conservation when there’s scarcity. It can also inspire the creativity to make more efficient systems that rely less on people having to do something.

We’d probably never have civilization if some group of bums didn’t try to make their workload smaller through division of labor!

No matter how much you push people you can’t make them change, you can only change yourself and hope to lead people to change.

It’s like trying to force water to boil by vigorously shaking it thinking the molecules are moving enough to turn to gas, when you could just as easily build a fire to add a steady supply of heat

28. There are no absolutes.

Being an atheist doesn’t make you any smarter, and being religious doesn’t mean you’re a good person.

The customer is not always right.

People like to think this is in reference to the individual because that feeds into their story of them being special in some way. What it really means is that on an economic scale the customer, the collective group with purchasing power, is always right, and a business that tries to sell the customer something they don’t want will fail.

If the buyers market says they want peaches instead of plums you sell them peaches. To try to sell them plums would be foolish, you as a business can’t possibly know what is best for the customer, even if you think you do. It’s the whole bring a horse to water scenario.

If a product isn’t selling well you stop selling it, there is no demand for it, if you can’t keep an item on the shelf a you order more of it, you do what the customer is telling you they want you to do instead of what you yourself think should be done.

You know all those movies where we battle the evil aliens? We’ll be those evil aliens. We’re extremely selfish and have no respect for other life.

COVID-19 is not gonna go away in the near future.

COVID19 will never go away because it’s now going to be endemic like with the seasonal flus and common cold. But the high d**th and ICU counts, mask wearing mandates and lockdowns won’t be indefinite. I’m guessing another year at this point overall (though much sooner for places with high vaccination rates).

Yeah, there’s just no point to knowing too much for most people, right?