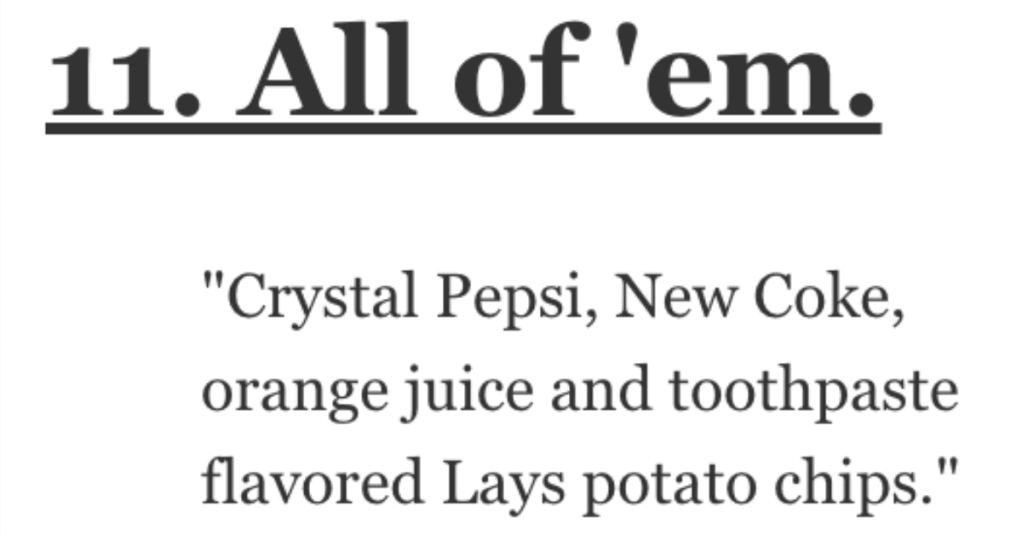 What Was Supposed to Be “The Next Big Thing”, But Totally Flopped? People Responded.

If you’re of a certain age, you probably remember when Crystal Pepsi debuted and everyone thought it was going to be a big deal.

But things get hyped up all the time and never go anywhere, right?

Folks on AskReddit talked about “Next Big Things” that totally flopped.

They pushed really hard for those and I never saw the point.”

“Everybody wanted the smallest cell phone possible. For 20 years cell phones got smaller and smaller. Often being the main selling point of the phone.

Then all of sudden you could watch videos on your phone, and almost overnight the trend reversed to “larger is better”.”

The issue here was time. The pizzas were actually a huge hit. The issue was how long it took them to cook relative to everything else.

One person in a family orders a pizza and everyone else is done eating before the pizza is done.”

These were like normal shoes, but you could grind on rails with them via an indent in the sole.

“Not sure if this one has totally flopped yet, but I noticed while in Costco the other day that there are no longer any curved TVs.

If Costco is no longer carrying them then I think we can assume they’re going the way of the dodo.”

“Google+ was supposed to be the answer to Facebook.

That was a lesson on how not to handle hype. There was so much hype around Google plus, it was infectious. But they refused to open it up to everyone and maintained a very hardline ‘invite only’ system.

Even once hype had peaked and there was a notable decline, still they maintained a small invite only system. I remember by the time they decided to open it up to everyone the hype was well and truly d**d and no one bothered with it.

They should have cashed in when hype was high but they (I assume) got greedy, thinking the hype would just infinitely increase and people wouldn’t get bored waiting to get in.”

In the beginning companies even bought real estate in there to allow people to visit them.”

Still remember half the movies being blue and the others red.

I worked at a Best Buy (Future Shop) at the time in Home Theatre and I remember all the 30 min conversations with customers about if they should buy a Blu Ray or a HD DvD.”

“Quadraphonic entertainment systems in the early 1970s, were supposed to replace stereophonic systems.

Now they are chiefly remembered for inspiring the name of The Who’s second rock opera.”

“This one might be a bit obscure just because I’ve only ever met one other person familiar with it, but Google’s Project Ara modular smartphone was looking like it could’ve been the end all be all of smartphones.

Based off the Phonebloks idea of having a Lego-like hot-swappable module phone, the idea was that you could switch out any components of the phone on the fly.

Camera, fingerprint scanner, even different quality screens. Conceptually, it really looked like it could take over the phone market, as it would lead to people not having to buy whole new phones anymore, but rather replacement or upgraded parts to a phone they already liked, thereby reducing costs and increasing utility.

You don’t want a phone with 5 cameras that inflate the cost unnecessarily? Just buy a one camera module. You want a 1440P Super Amoled screen to replace your 720P regular screen? Buy one and swap it in.

However, like many Google projects, it d**d off for myriad reasons and the longstanding era of $1000 dollar smartphone slabs lived on.”

What are some more “Next Big Things” that totally flopped?