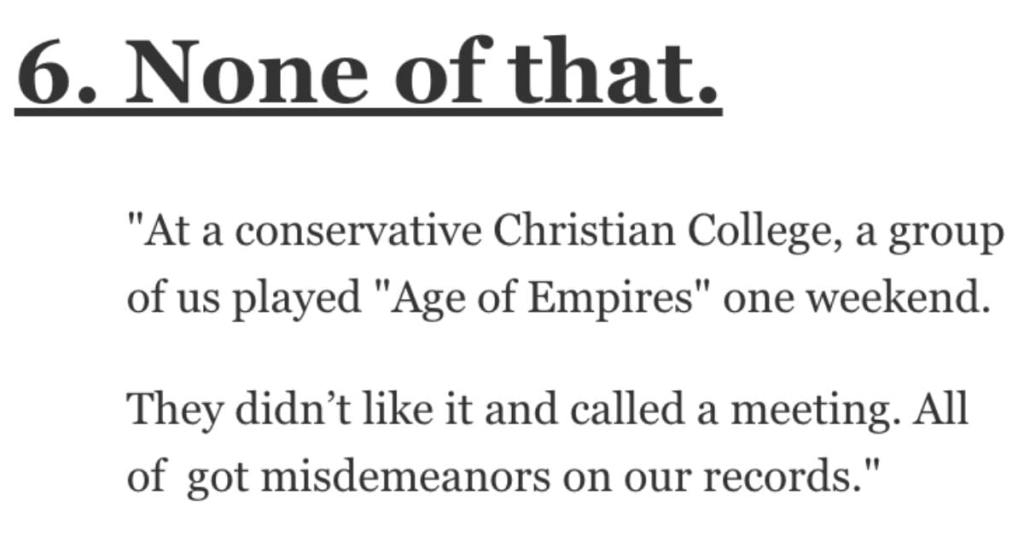 What Was the Dumbest Rule at Your School? Here’s What People Had to Say.

I don’t know why I still remember this, but for some reason at my middle school, we had to “tread lightly” on the bleachers in the gym because there was a “mechanical mechanism” that could be ruined.

It was very weird and we got yelled at about it every single time we went into the gym…over and over again.

Do you remember the dumbest rule that was enforced at your school?

Here’s what folks on AskReddit had to say about this.

“In elementary, they banned running ENIRELY. No running on the playground either.

They also banned all ball sports, and would take your ball if you took it in from home, and they would put it in the gym cupboard to be used during PE class (Physical Education)

Keep in mind that these were 4-11 year olds, so everyone ignored the rules and so many were in ‘Detention’ (I’m not sure what we called it) , that they had to drop the rule and nothing came of that

But the second rule about ball sports? Well it turned out that one of the kids in the year below me had bought in a sighed soccer ball, by a really famous player, and the school took it and kept it.

We found out because there was a very angry mother screaming at the secretary that they effectively stole something that could be worth upwards of 1000$.

They obviously gave back the ball, and stopped stealing them after that.

Who would have thought that stealing from little kids was a bad idea?”

“In my freshman year of high school we had a terrible vandalism problem, the bathrooms would be broken in various ways almost constantly.

In a stroke of pure genius, the staff decided that any bathroom that was vandalized would be closed for the week on first offense, the quarter for second, and permanently on the third offense.

They took back the rule after closing every bathroom on day one.”

3. Little did they know…

“Prom was a mandatory lockdown for the night in order to avoid students going to parties after prom.

Prom was held at various house parties across town instead.”

“In 6th grade they switched out all student chairs for large rubber stability balls.

There was a strict “no bouncing” rule.

It was a disaster.”

“No backpacks to class, but purses were allowed.

Girls started carring around purses big enough to be considered a backpack, guys got pissed started carrying purses too.”

“At a conservative Christian College, a group of us played “Age of Empires” one weekend.

They didn’t like it and called a meeting. All of  got misdemeanors on our records. There was nothing in the handbook about it being against the rules. The only person that didn’t get any punishment was the son of the president even though he was just as involved as the rest of us.

Was quite interesting explaining the write up on my record when I transferred. “You got a misdemeanor for what?!”

They made it a rule after the fact and did this several other times with things such as nail polish or radio control helicopters.”

7. Going a little bit too far.

“You couldn’t wear ANY kind of head items that were “gang colours” (red or blue) – this included hair bands, scrunchies, beads in your hair, ribbons – ANYTHING.

I got in trouble for wearing a blue hair band with white polka dots.”

“We weren’t allowed to play tag football at lunch, only frisbee.

When I asked the principal what the difference was, he responded with a sarcastic tone, “A football is round and a frisbee is a flat disk.””

“We had to wear belts.

Someone snitched that people weren’t wearing belts under their sweaters, and they actually checked and a bunch of people got detentions.

“My high school mascot was Daniel Boone holding a musket.

A kid wore a Guns n Roses shirt to school and was told he had to change shirts because of the pistols on the shirt. He pointed out the hypocrisy of the school mascot and they changed EVERYTHING. The mascot was switched to holding a flag pole instead.

Every instance of the mascot was changed from the multiple signs outside and around the school to the giant picture in the middle of our basketball stadium.

Holden, you’re a f*cking legend for this.”

“All the kids (6th or 7th grade) started putting pink laces in their shoes (don’t know why) but the school officials banned colored laces saying “pink is a gang color”.”

“They decided everything bad happened in the last 5 minutes of lunch so it got 5 minutes shorter each year.

Tell us about the dumb rules that your school had.