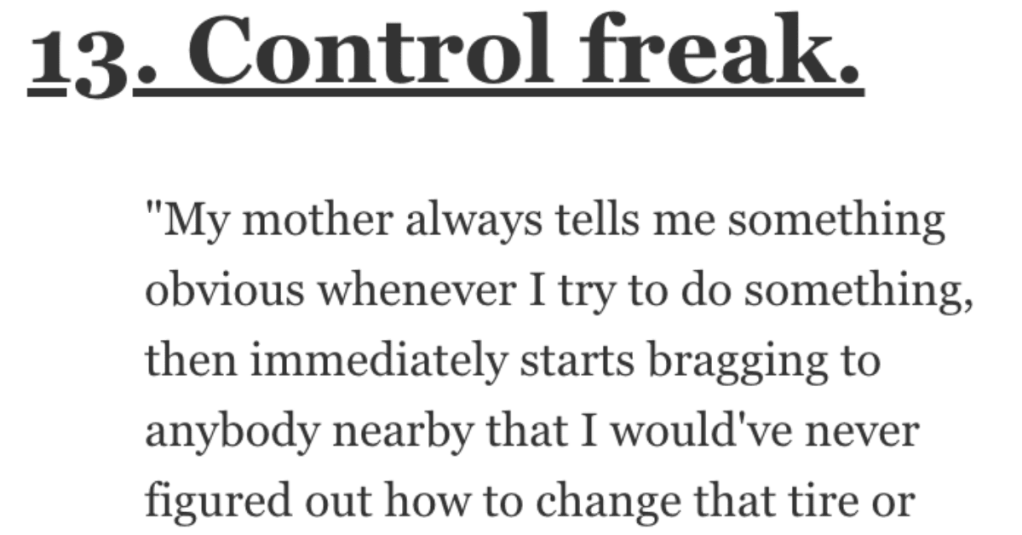 What Was Your Biggest “Well, Now I Don’t Want to Do It” Moment? Here’s What People Said.

When you tell someone “you HAVE to watch this, it’s so good!” the natural reaction most of the time is not for them to get enthusiastic, but instead to feel like they’re being given a chore.

Rather than that approach, try saying “I think you would really like ______, because _______.” It shows that you’re thinking of them in the equation and not just being a pointless evangelist for your latest binge.

What was your biggest “well now I don’t want to do it” moment? from AskReddit

So, what puts us off? Let’s find out.

Back when I was younger, my mom would always ask about girls. Like all young boys, I didn’t know sh*t about girls. I needed guidance, so of course I’d tell her what’s going on. Instead of helping, she just teased me about it, pretty relentlessly.

When I got my first girlfriend, she made a point of embarrassing me in front of her, because “that’s what mom’s are supposed to do”. Not just once, every chance she got.

Since then, she hasn’t met anyone I’ve dated, and I haven’t answered a single question about my love life.

When someone says “want to hang out? it’s not like you’re doing anything right now.”

Doing nothing suddenly sounds more pleasant than hanging out with you

I mean, it’s probably right, but it makes me not want to.

When I was a kid my dad suddenly got really into Catholicism and made us all start going to mass on Sundays. He made my two older sisters go to catechism school and they did their first communions. They hated it, but being the youngest sibling I thought it seemed like a cool big kid thing to do, so I was excited to do it too one day.

A few years later my best friend started going to catechism school and was getting ready to do her first communion, and I wanted to do it with her because I thought it would be really fun to be in the same class and do all this stuff together. My dad, who several years before had gotten into screaming matches with my sisters over their resistance to catechism school, was suddenly putting mine off. I kept approaching him saying, “Dad, I want to do my first communion with [best friend,] will you please sign me up this year?” He would say “sure” and then nothing would happen. I would ask him again, and the same thing would happen. I brought it up A LOT.

He put me off for an entire year, and my friend of course finished her catechism schooling and completed her first communion. Suddenly he remembered that I hadn’t done my first communion yet, and one day he said, “you need to start going to catechism and do your first communion.” At this point I was 10 and wanted nothing to do with it, so I refused. He screamed at me and shamed me about it big time. I’m still mad about it.

I WOULD HAVE DONE IT EARLIER WITH MY FRIEND IF YOU HAD JUST LISTENED TO ME, DAD!

My mum and I had both been thinking that what with the pandemic, and with how our house is situated so that it’s quite visible when entering our village, we should decorate the house more than we normally do for Christmas. Nothing fancy, just a few more lights outside.

Then we got a village-wide email from a very well-meaning lady saying that since ‘Christmas is going to be a little bit different this year’ she was launching Operation: Light Up [Village] and wanted us all to put extra effort into the Christmas decorations.

We both instantly went off the idea. We’d really wanted to potentially cheer people up on their drives home, but not if this woman was going to think she was the sole factor in making this happen.

We eventually did decorate the house, and even brought some new multicoloured lights to do it, but it was later than usual, just so that we could make sure we weren’t doing it at the same time as the Operation.

It results in me feeling bad for ever getting it in the first place.

When I clearly have the left turn blinker on and the passenger says, “you’re gonna wanna take this next left”.

I’ll happily go down on people I’m dating pretty much any time they like, but I swear to God, if I feel your hand on the top of my head…

When I turned 18 (legal age to drink), I stopped drinking alcohol.

It didn’t seem as much fun, when I could just go to the local pub.

For my 18th birthday my parents bought me 18 lottery tickets. It’s a sort of tradition in our family. Didn’t win anything except another three tickets.

The day after my party, my best friend and I were out shopping and I decided I wanted to exchange them for the other tickets so we stopped at the nearest gas station.

I won $500. As we were leaving I was considering splitting the money with my friend. Until we got in the car and she told me to buy her a new phone. I was silent for a moment out of shock and she added “that money is mine too, I drove here”

I was a pretty quiet kid.

I wasn’t shy I just knew when to shut up.

Nobody wanted to coach Little League when my sons started about 7 years ago or so. So if I wanted them to play, I’d have to coach.

I’ve been doing it every year including All-Stars and the program is pretty big now but I wanted to stop soooo many times and it all is related to the parents. They are unbelievable. Your kid is not as good as you think they are.

My mother always tells me something obvious whenever I try to do something, then immediately starts bragging to anybody nearby that I would’ve never figured out how to change that tire or wash those dishes/vacuum that rug if she hadn’t told me how to do it.

It has become a common thing recently to just drop whatever I’m doing and leave it unfinished until she does it herself.

I hate having anyone hover over me just so they can treat me like a brainless moron who only exists at their personal amusement.

A big name trainer came to the barn where I kept my horse. Totally different discipline, but I had absolutely no problem with her and her dozens of students being there.

I happen to be pretty good at certain things that this trainer simply could not do. She was very well known, but not necessarily GOOD at her job. So she had me give her students pointers from time to time. I love all aspects of the sport, and I enjoy working with younger riders, so I gave them pointers. You can see where this is going- before long, I was essentially teaching her students. She was getting paid hundreds of dollars for me to teach her students.

One night, she used my horse for one of her lessons, and got mad at me because her student couldn’t ride it properly. Imagine a banjo player trying to squeak out a tune on a clarinet. It’s not that the student *COULDN’T* ride it properly; she just didn’t know how to finesse the situation. Essentially the trainer thought that since I was working with the student, the student should be able to ride my horse perfectly. H*ll, I couldn’t ride my horse perfectly.

So I pretty much stopped coming out when I knew they would be there, and if they were there, I stayed away. As much as I loved working with the kids, that ruined it.

While I was at a jeweler’s shop buying my ex-girlfriend’s engagement ring, she called and was screaming at me for having got the wrong kind of pot roast for a dinner we were hosting.

I stood there, listening to her scream and cuss me out and decided I didn’t want to do this for the rest of my life.

Happily married now to a woman that is way chill and never screams at me on the phone.

About 10 years ago I was asked to visit a client in a country I wasn’t too sure about.

Not a problem though, I’ll just check the security advice first, if that’s OK.

That advice was “When checking in to your hotel, ensure you have an inward facing room to minimize the risk of ricochet”.

Err, you can find someone else to go see that client, thanks all the same.

As a kid, everytime you’re just about to say “thank you” and then your mother feels the need to jump in and ask you: “what do you say?”

Whenever my wife changes something up in her looks and we are out with friends there is always that one friend who has to specifically comes over and makes a show asking me “OMG don’t you just think she’s so beautiful? Why don’t you tell her how beautiful she is?!”

To which I want to say “Of course I do, do you think we wait for your presence to have affectionate loving moments? F*ck off, I don’t need your help to be a good partner.”

I just leave it at “yes, of course I do” though.

coming out of my room to socialize with family/guests only to have get a comment like “look who came out of his cave for once!”

look who’s about to go right back in it

I like reading but the moment my mom/a teacher tells me to read I just don’t feel like it anymore.

When you say sorry and they say you better be, never wanted to take back my sorry so bad

Trying to push through depression and start cleaning the house and people talk to you like an idiot.

I only clean when no one is home now.

I was asked to be bridesmaid for my brother. Was always a tomboy.

I expressed some concerns about how my hair would look with the fancy garlands that the bride was planning for us to wear as I thought I’d look silly.

I’m in my fifties now, I have to this day, never been a bridesmaid.

When I was younger, all those times I was thinking “you know what, I’m finally going to get around to (x)”

When I start a sentence and I’m immediately interrupted for no real reason then they’ll have the nerve to ask what I was saying.

When I’m planning on doing something and someone tells me to do it before I can.

There is no way to prove you were going to do it before they asked you and it annoys the sh*t out of me.

This is mostly work related.

I always, without fail, wash the dishes every night.

My mother knows this but always feels the need to tell me and I get frustrated because I always do it without her asking.

Edit: I have an older brother (21) who simply WON’T do housework.

Remember, keep being petty out there!

What thing will make you stop doing a thing?