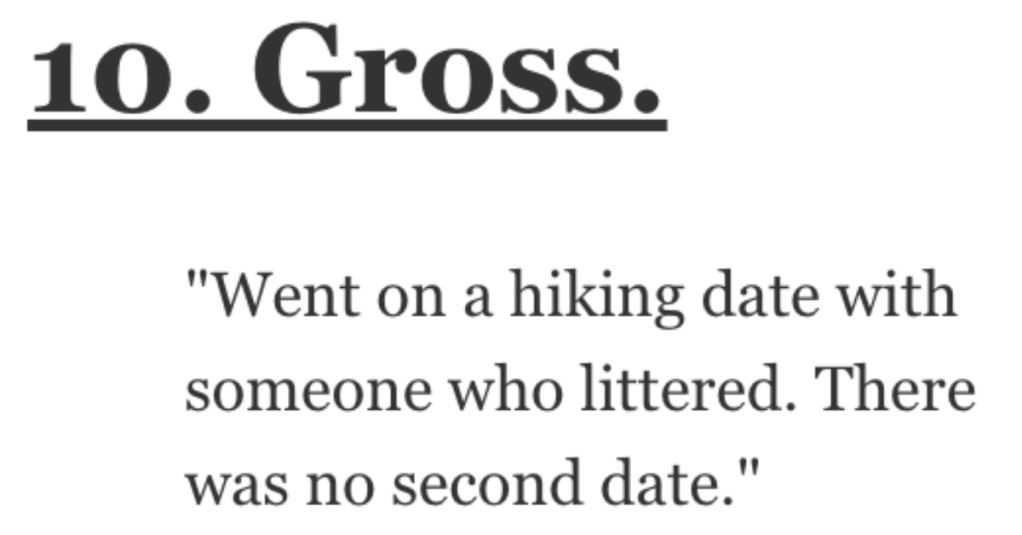 What’s a Relationship Dealbreaker for You? Here’s What People Said.

When you break up with you and you tell your friends and family about it, the first question is almost invariably a sympathetic “what happened?”

But often, there’s no big specific thing that “happened” just a trait that made one or both of you realize you just couldn’t be together. Traits like the ones discussed here:

What opinion or behaviour would stop you being romantically interested in someone even if they ticked every other box? from AskReddit

Let’s see what some of the big turn-offs are for the people of Reddit.

Never holding my hand or not having any nonsexual physical contact

My ex boyfriend would always say “oh no, you want to do this not that” every time I talked about doing something one way.

It even crossed over into me researching/buying gear for backpacking or biking etc..

He always seemed to know better than me and I will not ever be able to be with someone again who tells me what to do/what to buy/makes me feel like I don’t know what I’m doing.

The one that surprised me – about myself – was a whiny voice.

Person had everything else going for them, but after a few hours I just couldn’t stand the thought of listening to that voice over the long haul.

Being obsessed with social media or needing to document everything all the time and project a perfect version of their life.

Make me feel like my feelings are invalid or that theirs are more valid than mine.

My mom does it and it’s crushing.

Not believing dinosaurs are real

8. The beginning of the end.

Actually tonight my gf said “I love everything about you, but watching you eat unpeeled kiwis like they are apples really freaks me out”

The need to always be the right one

Went on a hiking date with someone who littered.

There was no second date.

Don’t litter yall! It’s selfish and ruins the trails for everyone else.

I had an ex who consistently lied and omitted things.

Usually not about anything huge, but she had a habit of it and didn’t seem to think it was wrong.

The longer we dated the worse it got. Eventually it really divided us because I couldn’t trust anything she said.

From then on, if I discovered I was with someone who lied often as a tactic, to get what they want, to avoid consequences, etc. that was pretty much the end of the relationship for me.

Not being a critical thinker.

I’ve thought of a whole laundry list of things that would be dealbreakers but they all boil down to whether or not he could think critically.

Or if I said, I finally beat an ironman run of X-Com 2 she’d say, “I wish you’d find a more productive hobby.”

If they don’t even attempt to get along with my friends.

Or watching videos on your phone, volume all the way up at a restaurant, on a double date.

Believe or not I dated a guy that did both, and I cringe thinking back on it

Someone who is a bad guest at someone else’s house.

A girl told me she had been engaged six times. She was 29.

I know things happen. But that’s a lot of things.

“How come you don’t express yourself?”

*proceeds to express myself*

“You’re being too emotional!”.

F*ck outta here with that sh*t.

If the person you are dating makes you feel small. Not in a physical sense but like you’re less than them.

I’ve learned thats my first sign to book it out of there.

Being condescending. I hate it. It makes me angry.

Be nice to people. Accept they may not be as knowledgeable as you on a subject. Don’t condescend.

Hoarding – I made this mistake once, I got into a relationship with a hoarder.

I eventually realized that her deeply dysfunctional relationship to objects extended to the people around her.

I was not an actual person, I was just another acquisition that was acquired and subsequently treated shabbily.

I’m not sure if this is common but I won’t take the chance again.

He told me he would much rather make small talk with a stranger then have a deep conversation with good friends.

I don’t know why I didn’t see it before but that described perfectly why we never connected on a deeper level after being together for two years.

If they have toxic friends. For a lot of reasons.

The need to constantly be on your phone.

Totally fine with spending a lot of time on it, but if you can’t put it down to watch a movie or have a conversation then it’s a problem.

If you notice the person you’re interested in tells fibs or little white lies early on, it’s only going to be catastrophic once you clear the honeymoon phase

People who act like the world owes them everything when they were raised with more than most people.

People who demand respect but treat others poorly.

Someone who always talks but never really says anything.

Say what you mean, mean what you say

Yeah, I can see pretty much any of those ending an otherwise good thing.