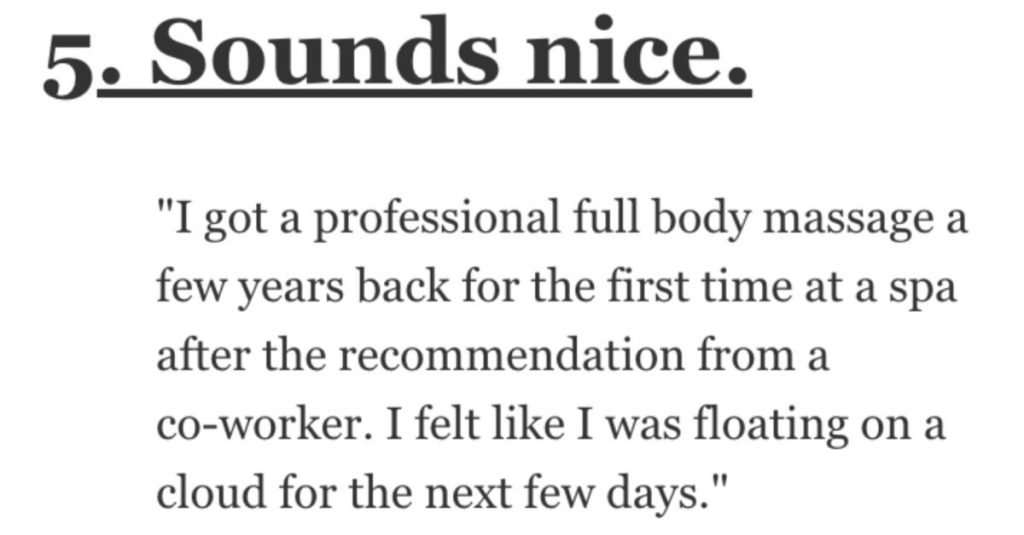 Hey, get your head out of the gutter!

Yes…I’m talking to YOU.

Because today we’re going to hear from AskReddit users about the best physical feeling you can experience that is totally WHOLESOME.

“I had a cast and splint on both my legs for 2 months.

When they cut it off, they scratched my legs for me and the itch was just top notch!

“Right after a migraine goes away.

“When you’ve been up for 20 hours+ and finally get into bed and you just know it’ll be the best sleep of your life.”

“Finally getting to take a p**s when you really have to go.

Especially if you’re in the woods on the side of the road in the middle of nowhere.

Nothing beats that level of serenity and relief.”

“I got a professional full body massage a few years back for the first time at a spa after the recommendation from a co-worker.

I felt like I was floating on a cloud for the next few days.”

“The feeling of water leaving your ear after being there all day.

Then you feel like you have some kind of superhero level hearing afterwards for a while.”

Then you get that 20-second feeling of breathing through your nose again and it is glorious.”

“Coming inside from the outside during winter, crawling into your heated blanket with the lights dimmed, and just chilling.”

“Taking Percocet that my doctor prescribed me after getting dry socket from wisdom teeth removal.

Felt so so good to have that awful pain removed.”

“Getting my nasal packing removed 2 days after nose surgery.

Feels like they pull it directly out of your brain and you can think clear again.”

“The feeling of being desired again.

Not specifically about s** but knowing someone found my attractive and made it known (we’re now dating) the feeling of euphoria from the dopamine was insane.”

“The handshake and head-pat I got from Gordon Ramsay when I attended one of the Hell’s Kitchen filmings and I told him I was an aspiring chef who was going to focus on gourmet Kosher foods.

He told me to keep learning from my experiences as a novice chef; I have a culinary degree now.”

Sound off in the comments and make your voice heard!