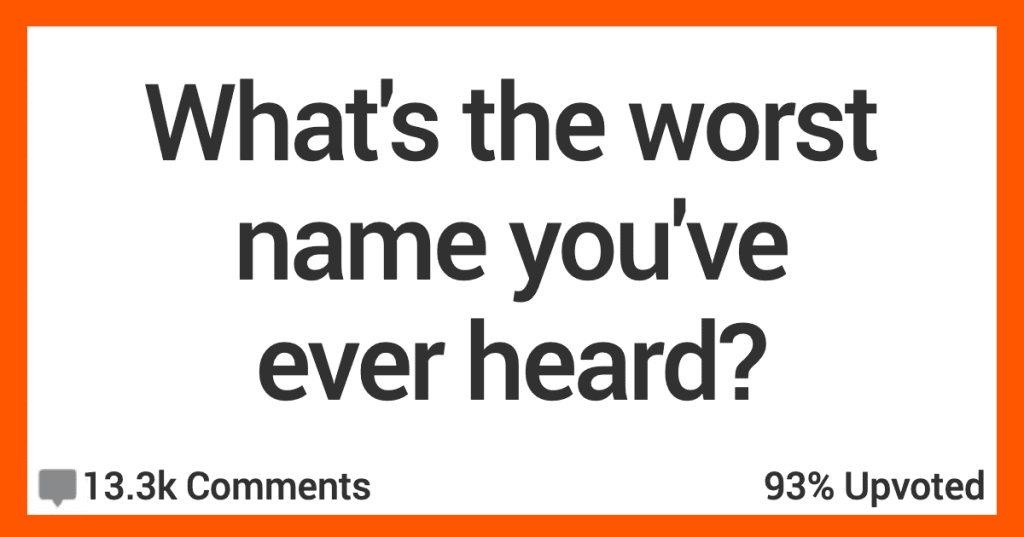 What’s the Worst Name You’ve Ever Heard? Here’s What People Had to Say.

That’s really gotta suck to be cursed with a terrible name.

I mean, I guess you can always change your name when you get a little older, but growing up with a name means that all the other kids at school are going to tease you and make your life a living hell.

“I had a customer named Dick Butts.

I thought it was a joke, but one of the employees asked to see his driver’s license and it was truly his name.”

“In elementary school there was a boy named Famous.

His younger sister was Fashion.”

“I’m in healthcare and the worst name I’ve seen on a kid is Meatball.”

Never feed her after midnight…”

“‘Messiahiscoming’ is by far the worse I’ve heard.

The kids started calling me Mrs. Wiener so I told him I couldn’t be his girlfriend anymore.”

“To be different”, per his mom.

“Once at work, I met a guy whose first name was Greg which is not all that bad.

The only thing is, is his last name was also Greg.”

“In the military there was this guy called Richard (Dick) Sergeant who was a Staff Sergeant.

So his name was Staff Sergeant Dick Sergeant. He owned it though so good for him.”

Yes, spelled exactly the same way as the antibiotic.

When questioned, the mom said “I just thought it was pretty”.”

“Michael Kidiporns was a customers name.

Was on the precall went to say “Mr Ki-…sorry I’ll just butcher your name.” He said “No it’s Kidiporn.”

Sorry bro but a name change would be first on my list of things to do, now.”

“My mom had a coworker who named her child Tequila.

I never knew so many people were named after al**holic beverages…it’s kinda sad.”

“A pair of sisters I knew were called Yoghurt and Lemon.

I feel so bad for them, because if their parents named that, they’re psychos.”

It was a compacted version of “my first son”.

“A dear friend of mine who recently passed had the nickname Booger and honestly, nobody called him anything else.

His dad called him that when he was little, and he was just Boog forever. I miss you, man. The world shines a little less without you in it.”