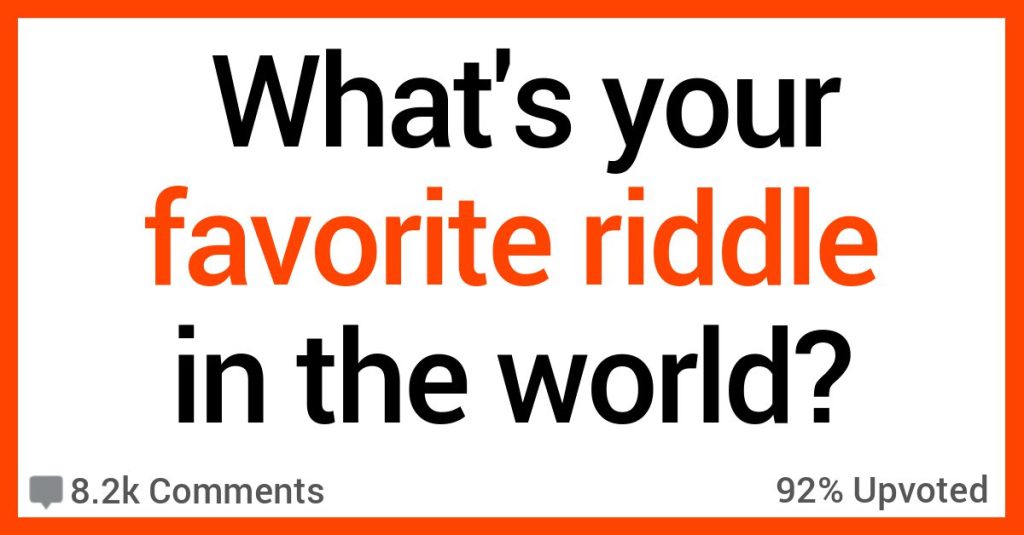 Did you know there are only two types of people in the world?

So basically, there’s no reason that we all can’t read and enjoy these gems – especially since I’m going to give you the answers, so you don’t even have to think about them to have a good time!

Your task is to determine the identities of A, B, and C by asking three yes-no questions; each question must be put to exactly one god. The gods understand English, but will answer all questions in their own language, in which the words for yes and no are da and ja, in some order. You do not know which word means which.

A single god may be asked more than one question, questions are permitted to depend on the answers to earlier questions, and the nature of Random’s response should be thought of as depending on the flip of a fair coin hidden in his brain: if the coin comes down heads, he speaks truly; if tails, falsely.

Answer: You tell us!

2. Ask all of the questions.

A man is driving on the highway. At one point, he stops, gets out of his car and shots himself. Why?

Answer: He’s a radio anchorman. He k**led his wife for insurance fraud or whatever reason and wanted to cover it up by pre-recording his show which normally airs live to have an alibi for the time period when his wife was k**led.

After the deed, he was driving home and heard his own voice on the radio… but the tape got stuck and now everyone knows his “live” show was pre-recorded.

He k**ls himself upon realizing his alibi won’t work

A mountain climber, barely alive in the middle of a freezing blizzard, stumbles upon a wooden cabin. Pulling himself inside and well aware that he’s got severe hypothermia on his face, hands and feet, he surveys the interior.

There’s a small wood-burning stove and even an old propane barbecue, although our hiker can’t remember if burning propane indoors is safe. On a small bedside table is an aromatherapy candle, although the climber isn’t sure how much heat it’ll give off, and an antique oil lantern less than a quarter full.

Going through his supplies, the hiker discovers he only has one wooden match left. And with less than ten minutes before he succumbs to the frostbite, his survival depends on making the right choice.

What does the hiker light first?

What can travel the world while staying in a corner?

They only have one flashlight and whenever a person/group is crossing, they must carry the flashlight. What’s the quickest amount of time to get everyone across?

What can be filled with empty hands.

7. You can only tell it verbally.

One knight, a king and a queen put their baby to bed. Then the king and queen leave the room. In the morning the baby was d**d, how did it d**?

Answer: The knight k**led it.

If you’re speaking, most people will assume you said “night.”

8. That’s a ton of information.

Looking for something? Open me. I’m sure that your something inside of me lies. Of course, you could always find hope in me. Though, despair must come first, and later surprise. What’s sought, though, depends on the seeker.

Some look for bobbin, others for beaker. Others for nature. Still others for nurture. The quarry will vary from searcher to searcher. And, yet, I suspect this will strike you as strange: My contents are set and will not ever change.

If you still cannot guess what I mean, here’s a clue: The answer, what I mean, lies inside of me, too. What am I?

How far can a dog run into the woods?

Answer: Halfway. After that he’s running out of the woods.

Tear me off and scratch my head. What once was red is black instead.

Two old fishermen are sitting by the fire talking. One says “The ones we caught we threw away. The ones we didn’t catch we kept!”, and his friend agrees.

What are they talking about?

This one is very heavy on lateral thinking – after giving the opening to the riddle (below), tell the other person they may ask as many questions they want to figure the answer out providing you can answer it with “Yes”, “No”, or “That’s irrelevant”.

A man walks into a restaurant and sits down at a table. He orders a seagull sandwich from the menu. The sandwich arrives, the man takes a bite of it, then leaves the restaurant, goes home, and commits suicide. Why?

Your friend is then expected to get the following convoluted solution from their questioning, which from experience people either love the game to figure it out, or loathe how out there the correct answer is.

Answer: The man is a widower whose wife died on a holiday in the past. They were on a cruise when the ship capsized. The man and his wife made it onto a lifeboat with a few other survivors and washed up on a deserted island.

The man’s wife and another survivor went to search for food and eventually the stranger returns with a large amount of “seagull meat”, but unfortunately informs the man that his wife was k**led (fell to her death, gored by a bore, or anything else) during the expedition. They eat the “seagull”, and after being rescued the man returns home alone.

In the restaurant the man orders a dish containing seagull meat, and upon taking a bite he notices that the taste is not the same as the “seagull” he ate on the island. The revelation makes him realise what actually happened that day, an unable to live with the guilt of eating his wife, he k**ls himself.

It is the beginning of eternity, the end of time and space.

It is the start of every end, the end of every place.

One night four men sat down to play;

They played all night ’til break of day.

They played for gold and not for fun

With separate scores for everyone.

When it came time to square accounts,

All men had made quite fair amounts.

Can you the paradox explain,

If no man lost, how could all gain?

Answer: Yes (what was stated is correct)

With pointed fangs and in plain sight, my bloodless victims are bound by my bite.

What word begins with e, ends with e, and contains one letter, but is not the letter e.

I am heavy forward, I weigh a lot. But when I am backwards I’m certainly not.

This one cant be told online but is an absolute brain bender irl.

Answer: 10 because 28 is actually “twenty ate”, but people have 28 in their heads and have a hard time solving it.

It’s thrown away when needed most, yet brought back when done with it.

Two girls went to dinner together and both ordered iced tea. One girl pounded down five of them in about a minute, and the other took her time drinking one.

Why did the girl that drank more iced tea survive?

Answer: the poison was in the ice

24. Whistle while you work.

What starts and ends with T, and is filled with T?

There is a windowless room with only a single door. Inside the room is a lamp, when the lamp is on no light escapes the room.

Outside the room are 3 switches one of which operates the lamp.

You can use the switches in any order any number of times. The door can only be opened once and after you enter the room you can immediately know which switch turns on the light.

How is it possible?

Turn on the first switch, wait a few minutes.

Turn the first off and the second on.

Go into the room. If the light is on, it’s the second switch. If it’s off, touch it. If it’s hot, it’s the first switch, and if it’s cold, it’s the third.

The maker doesn’t want it.
The buyer doesn’t use it.
The user doesn’t know it.

Andre and Leo are d**d on the floor, naked, and surrounded by water and broken glass.

If foul play isn’t at work here, then what happened?

You have a square house. All 4 walls face South. A bear steps in your front yard.

What color is the bear?

Answer: white, because you must be at the North Pole

A d**d man is sitting in a chair. The chair is in a cabin. The cabin is in the woods.

I’m putting these in my back pocket to pull out at a party (if I ever get to go to a part again). I can’t wait to sound smart.

What’s your favorite riddle? Tell it to us in the comments!