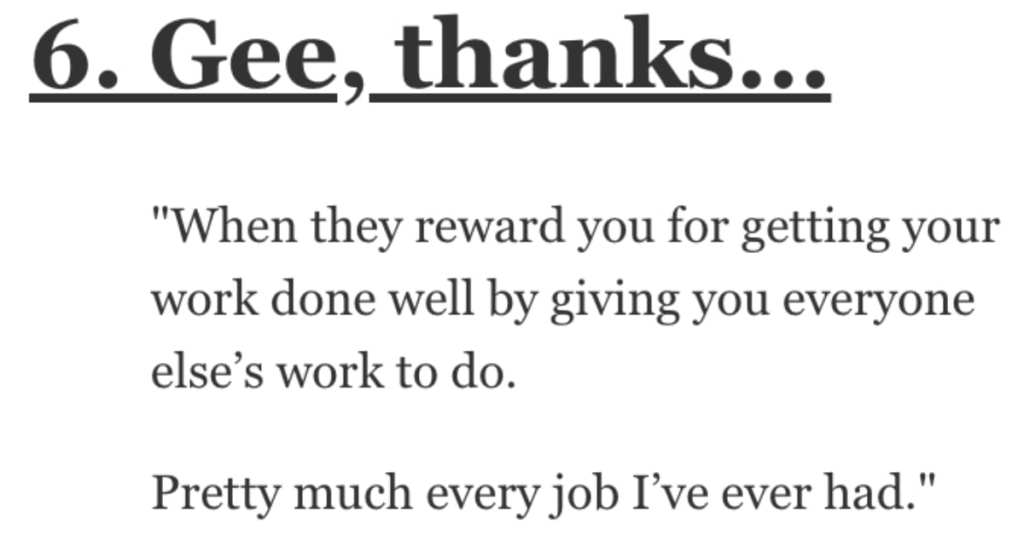 When Did You Realize That Hard Work Doesn’t Always Pay Off? People Shared Their Stories.

There are no shortcuts in life!

And I still think hard work is a really important part of life…but as you get older, you realize that it doesn’t always pay off the way you think it will.

AskReddit users shared stories about when they realized that hard work doesn’t always pay off in the end.

Those performance based raises are deliberately rigged to not give people the best raises. I only really understood how much when I became a manager and was overruled on how much to give my employees a raise when I gave them a 5/5.

She came in whenever we called. Stayed late whenever we needed. Was the epitome of the perfect employee and was well loved by everyone that shopped there.

They changed her evaluation from a 5/5 which was I believe a 50ish cent raise (still not enough) to a 3/5 which was a 10 cent raise.

She quit a few weeks after I told her and no one we’ve hired has been half as productive as she was.”

“I never ever called off sick.

And yes, I understand now why that is not a good thing, but when I was young I thought you went to work unless you were on your death bed.

At a staff meeting, boss was reading everyone the riot act for calling off too much and his second in charge said “Well, except for (me), they’ve never missed a day.”

“Worked this office job for 9 years, ever since I turned 16.

They kept giving me responsibilities, never any pay raise beyond the minimum they had to, all the while telling me how I was indispensable. Then Covid hit and they laid off all my coworkers.

They told me I could stay, but for less hours than before and definitely no pay raise — just more responsibilities, either working from home or in an empty office.

I declined the offer and quit right then and there. Felt pretty cheated though.”

“The first time I had a real job.

Turns out that working harder than your coworkers does not impress them.”

So I avoided working too hard for a year and got a $0.40 raise. No bullsh*t. Also passed up a “crew leader” position to work in an easier area, then they made me a crew leader anyway in the new area, I didn’t even ask.

The company I work for now does some *ss-backwards stuff too. It drives me nuts. Progress takes time and there’s a fine line between getting stuck because you’re too good at something and getting moved on to promote you.”

“When they reward you for getting your work done well by giving you everyone else’s work to do.

Pretty much every job I’ve ever had.”

Now what kind of reward did I get for this

A raise? A promotion?

I got a small pin I was “allowed” to wear that just said something like “Management Appreciates Me”.”

“I worked for a few years at BJs.

First year I got a 59 cent/hour raise, which was unheard of because I’d been hired far higher than what cashiers were hired at. I got glowing reviews by the person who reviewed me.

By the time of my next raise, a trusted person had told everyone who would listen that I was gay. This led to a LOT of gossip, harassment, and bullying on the job. My reviewer, the same woman from before but who just HAPPENED to also be a devout Christian, gave a harsher review and I got something like 9 cents.

I went from being super well liked to suddenly a pariah all because of my s*xuality. It was f*cking awful and I knew that it didn’t matter how hard I worked if some Bible thumper was going to use it as an excuse to hate me.”

“I was a really bit of a people pleaser when I was younger.

Tried to do everything to make life for everyone easier, turns out that they just took advantage on me”

“When I realized I get paid the same as coworkers who are putting in bare minimum.”

“By being taken advantage of repeatedly.

Go above and beyond the expectations in hopes to advance? You now have to do that advanced job with way more work for no pay increase and in less time than the people getting paid more than you.

Don’t ever let an employer know you’re capable or willing to do significantly more work than anyone else for the same pay.

If an opening arises and you have been consistent, you’re more likely to get the position than someone who does twice the work you do for the same pay just because you “follow the book” more.”

“There wasn’t one particular moment for me, but the saying “It’s better to be lucky than good.” is oh so true at times.

Sure working hard helps, but being at the right place at the right time is often overlooked by those that purely equate hard work with success.”

I was working at a pizza place known for letting you, the customer, bake the pizzas at home. I was working minimum wage, but I felt like I’d been there a while and wanted to move up. So I talked to my boss about a possible raise. She said she’d keep an eye on my performance over the next month and see if I deserved it.

Now, there was another employee they’re by the name of Jimmy. Jimmy was great of the was a rush because in those instances, just having an extra pair of hands makes a difference. But in all other aspects of running the store, he was useless. He slacked off and left his work for the rest of us to do. Of course, the manager loved him.

After a month of picking up every shift I could and doing every unpleasant task assigned to me, my boss tells me that I’ve been doing a fantastic job and that I earned my raise. I looked in my check and I was now making an extra $0.50/hr. Not great, but I was 16 at the time and it felt like the squeaky wheel got the grease!

Until I find out that Jimmy also got a $0.50 raise. And everyone else did too. Turns out the minimum wage was increasing nationally and they were legally obligated to give everyone a raise. When I confronted her about this, she turned the tables on me, telling me that talking about my pay with other employees was unprofessional.

She went on vacation shortly after that. I taped my two week notice to her door the day after she left.”

In the comments, tell us about the times you realized that hard work doesn’t always pay off.

We look forward to your stories.