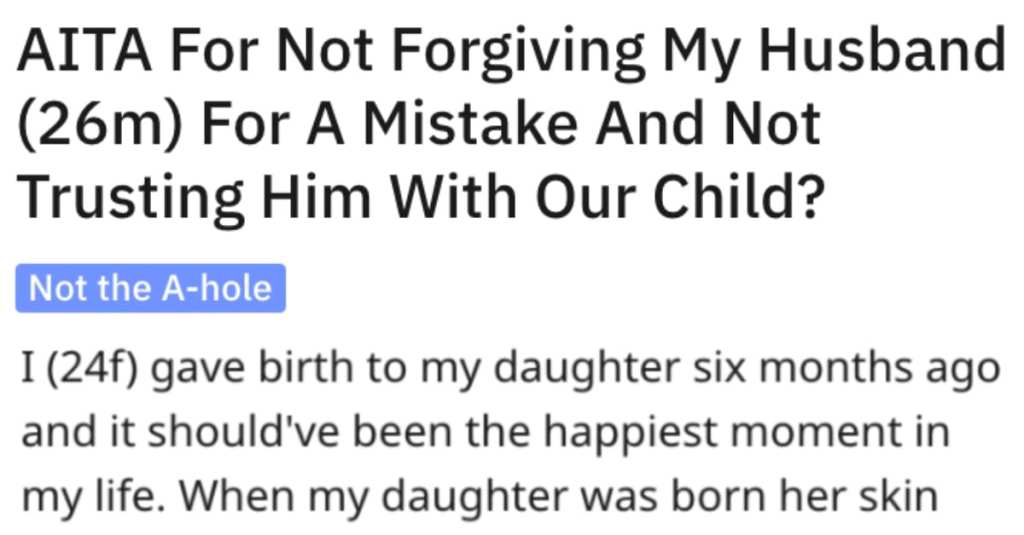 We all make mistakes. ALL OF US.

You, me, and especially people who are parents. And if you have kids, I don’t think you need to be reminded of this…

And you’re about to read a story concerning a mistake a father made that is causing all kinds of problems…and this woman is really struggling with it.

This person took to Reddit’s “Am I The *sshole” page to ask for advice from the readers there.

AITA For Not Forgiving My Husband (26m) For A Mistake And Not Trusting Him With Our Child?

“I (24f) gave birth to my daughter six months ago and it should’ve been the happiest moment in my life. When my daughter was born her skin was very dark and looked like she could have two biological parents who were of African descendent. My husband Jim (26m), fake name, was furious and accused me of cheating and left right then and there.

He told everyone on both sides of the family what happened, made posts on social media and wanted a divorce. His family and a lot of our friend all called to say how upset they were at me and called me really nasty names. My mother was by my side the entire time and I kept professing my innocence. Jim refused to pick me up from the hospital, threw my stuff out on the lawn and changed the locks, so I had to stay with my parents.

When my sister called to ask for the baby stuff Jim texted me pictures of the bare nursery room and said he got rid of everything. He even destroyed my Art studio, I like to paint, and the art I made and told me my work would be too awful to sell. I was distraught and tried to focus on my baby.

Whoa. Now that is crazy start to this story.

Does it get better?

Weeks went by and Jim refused to speak to me directly and has never once asked about our child. Eventually he agreed to do a paternity and he was 100% the father. No one could believe the results and it was done again, Jim’s the dad. Around that same time one of Jim’s cousins did the Ancestry thing and there was around 30% of African ancestry in the family.

This combined with the test Jim paternal great-grandmother admitted to having an affair around the time Jim’s grandfather was born and was because he could pass she just assumed her husband was the father.

Since then Jim has been reaching out and everyone has come to apologize, and while it did feel good to feel vindicated the damage has been done. I can’t un-hear or unsee all the horrible things that was said and done. Not just to me but to my child as well. Jim made some very racist remarks. Things that I thought he’d never say and he did it so easily.

Regardless of what our daughter looks like I don’t want her to be around that. What else will Jim and his family say or do the next time they get mad? How are they going to treat our daughter when she does something that upsets them?

So what does Jim have to say?

Jim has been begging for forgiveness. I said I needed time, he asked to see the baby and I let him but I’m too afraid to physically hand her to him. He’s repairing the the nursery and keeps asking me what I would like and I cry every time saying we already had what I liked and some of the items that we had can’t be replaced. He asked me if I still loved him and I admitted that he showed me his worst self and I don’t know if I could live with that image.

I didn’t mean to be hurtful but it’s how I feel. My sister suggested Couple’s Therapy but I don’t feel like I should have to work to fix something that I didn’t break. I’ve never cheated and have been 100% innocent in all of this the whole. AITA for not wanting to give Jim a second chance?

Update 1: I stepped away for a few hours and couldn’t believe what I came back to. I am truly amazed by all the wonderful comments of support as well as the private messages. I also understand why some people may think this is fake and all I can say is that you are free to believe what you want in this. I also see some questions and I think I should clarify a few things just in case your judgement may change.

All of this initially happened at the near February and I was already settled at my parents’ house before the pandemic hit.

One of the reasons Jim wouldn’t pick me up from the hospital was because I wouldn’t admit to cheating or give him any details, because there weren’t any which made him angrier.

Based on the pictures Jim sent me he didn’t take a sledgehammer to the crib or anything. He just took stuff down to either return it for the money or gave it away. While deeply hurtful I wouldn’t call it violent, but maybe it is.

Online he announced that I “pushed out a dark skinned baby” and was going to he was divorce me. His family started with the racial comments and eventually he started doing it too but only through my family, he refused to speak to me directly.

Once the truth came out everything he and his family posts were all taken down but I, and a few friends, still have the screenshots. Jim never wrote down his racial remarks.

While he didn’t say any of the racist words he did make comments about our daughter being a “Welfare Princess,” and how I was going to be just another “baby mama.”

Just to clarify. Jim is “white” and I am at least half white. One of my parents is adopted and with everything that’s happened they decided to do the Ancestry thing too and we should be getting the results any day now.

Now let’s see what people had to say about this tricky situation.

This reader thinks it might be best to try to work things out with Jim. 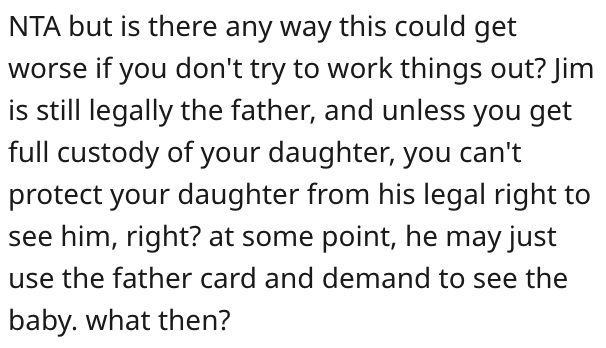 This Reddit user was blunt and to the point about the situation.

And this person obviously has a very strong opinion about what this mother should do. No doubt about it! 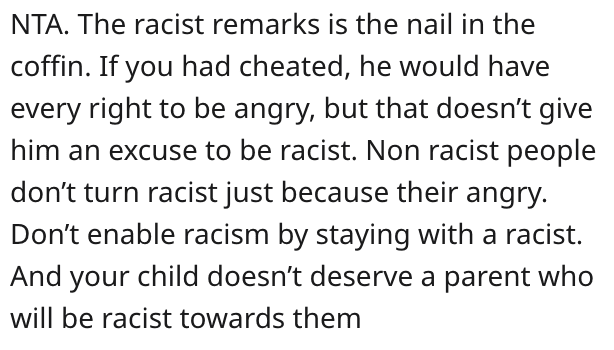 Another individual made a good point. What will the husband/father do next time he gets angry? 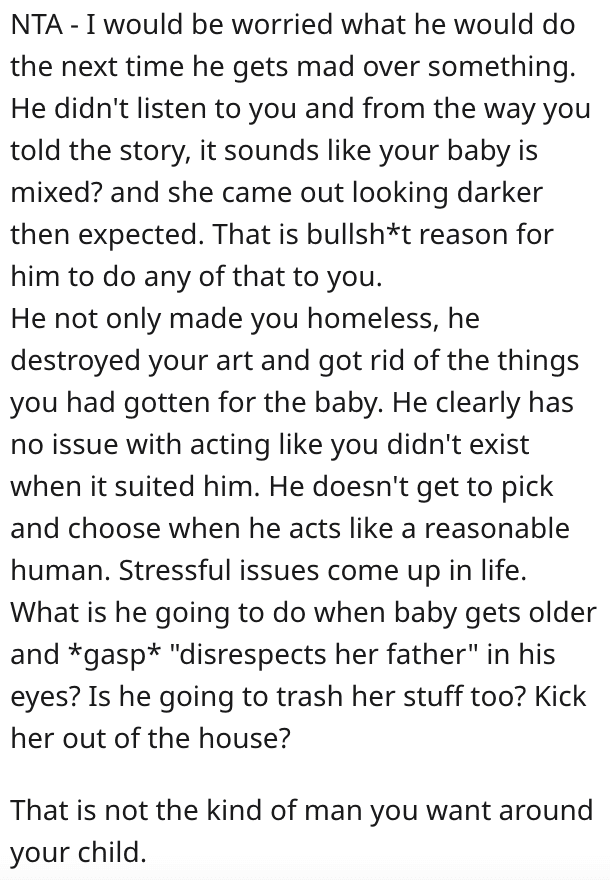 And this person even suggested that the woman needs to get a lawyer right away.

Finally, a Reddit user said that the father/husband really showed his true colors and that he’s a cruel person at the end of the day.