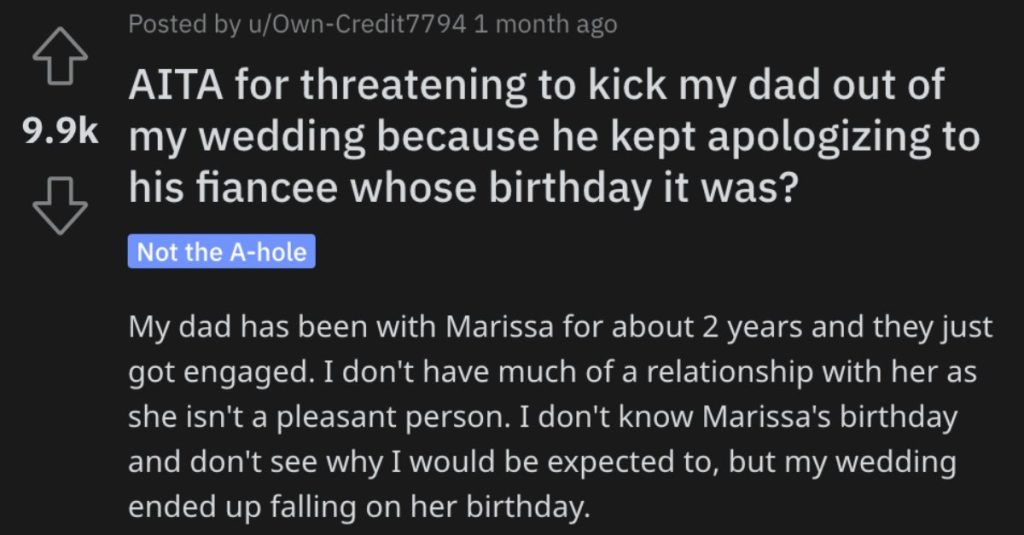 But if you’re a regular reader of Reddit’s “Am I the A**hole?” page, you’re used to all kinds of dramatic stories involving family drama.

So go ahead and read this one and let us know what you think in the comments.

AITA for threatening to kick my dad out of my wedding because he kept apologizing to his fiancee whose birthday it was?

“My dad has been with Marissa for about 2 years and they just got engaged.

I don’t have much of a relationship with her as she isn’t a pleasant person. I don’t know Marissa’s birthday and don’t see why I would be expected to, but my wedding ended up falling on her birthday.

When my dad found out the date, I could tell he was stressed. He said she has a lot of trauma and he feels so guilty spending her birthday at my wedding. I didn’t say much and figured they could work it out.

Well the wedding was last weekend. I’m not sure if Marissa was upset or not. She is very very stoic so idk, but my dad kept apologizing. When they first arrived and he came to see me in the bridal room he brought her for some reason, and as they walked in I could hear him saying sorry and asking if she was ok.

Right before the ceremony he had her on his lap and was whispering but I could hear it. He was saying he wished she would open her birthday presents and she was like I just don’t want to do it today. then he said what if she opens them and he buys new ones for the day they celebrate. Then my grandma came over and tried to give her a gift and he was just so annoying about it.

Final straw was during the reception. Marissa was complaining to my grandma how she h**es chocolate cake (only cake we had) and my dad took her in his arms and was asking if she wanted to go out later and get something, and again apologized.

I finally snapped and yelled at him if my wedding was such a burden take the child he is dating and get the f**k out (I meant because of her actions, there isn’t a big age gap) He looked horrified and I was like well go. My grandma immediately began to berate me that I am awful and he paid for the wedding.

He asked if i really wanted him to go, and I told him to either shut the f**k up about her birthday or go. He stayed but was cold the rest of the night and I heard Marissa and my grandma joking about how he should rip up the check he gave me for how I spoke to him. I don’t know if I overreacted as he was just having empathy for his fiancee.”

And now let’s see what folks said on Reddit.

This reader said she’s NTA and that people shouldn’t bring their family problems into public. 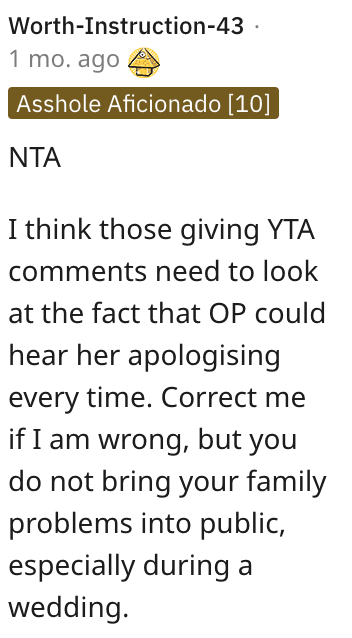 Another individual said she’s NTA and Marissa needs to grow up. 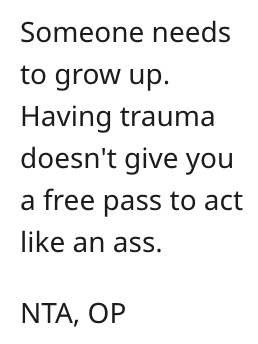