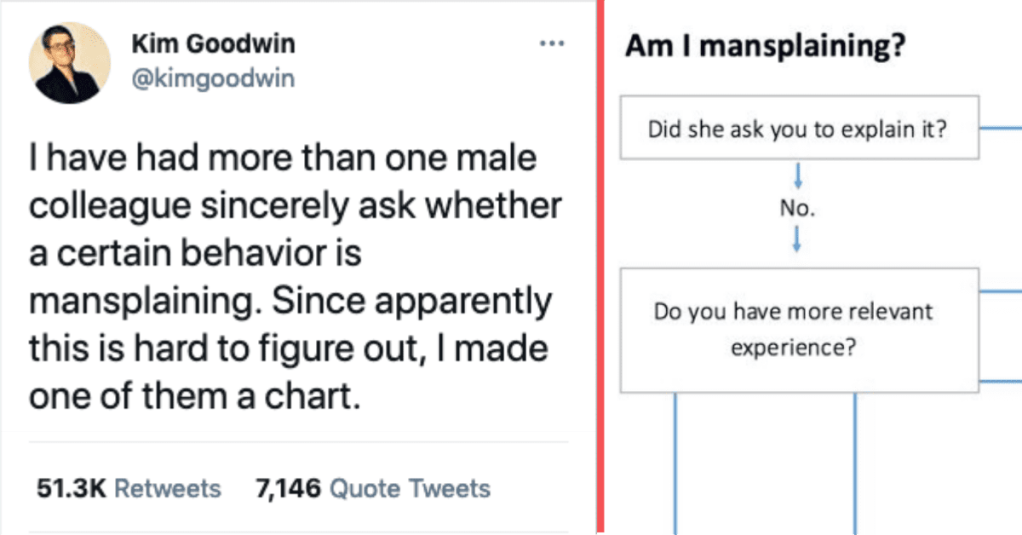 This week has really been a week for mansplaining. It’s like something’s in the water.

I know they don’t realize they do it. I know they mean well.
And we all just try to bear it graciously (some are more gracious than others).

But we all know that feeling of waiting for someone to finish waxing poetic on a topic we are very familiar with. That’s why one woman went viral after sharing a flowchart that she made for her male colleagues.

Kim Goodwin, the author of Designing for the Digital Age, is, among other things, an amazing wildlife photographer.

In fact, she wears many hats, including Consultant and Researcher. All of her titles and experience don’t save her from the mansplaining though.

Mansplaining is when a man explains something in an overconfident, patronizing tone, despite being inaccurate a lot of times.

The roots of mansplaining are often rooted in sexism, patriarchy, and arrogance.

And because “a picture is worth a thousand words” and other cliches that are true, Kim once made a chart that can be used as a handy guide to checking yourself.

I have had more than one male colleague sincerely ask whether a certain behavior is mansplaining. Since apparently this is hard to figure out, I made one of them a chart. pic.twitter.com/7DZ1RTrB3R

It shows all the different ways a man might not realize that he’s mansplaining to a woman.

She’s not the first to create such a chart, because it really is a universal phenomenon.

Ok this has been one of my top favourite ones we have ever shared ? credit: @keegzzz via @Future_Females #Mansplaining pic.twitter.com/VOiA2bB6lY

And Goodwin’s chart struck a chord with the Twitter community, with users lining up to take sides.

In response to some now deleted comments she added:

Apparently I live in the unreal world. I routinely stop people when I need something defined, and generally ask “Are you familiar with X?” before explaining. It’s not that hard.

At least one guy didn’t care for that solution:

Frankly, I’d find it condescending if anyone repeatedly asked if I needed something explained to me.

To which we ask–is it really more condescending than having them explain without asking?

Predictably, many women agreed that they felt this flowchart in their souls, and many men argued with the sentiment.

This is pretty unhealthy. By the logic in your chart, providing any kind of advice or information not asked for is often just ‘mansplaining’. What about the general good principle of making information available? It costs nothing.

Less predictably, a medical doctor who has spent years in an unarguably male-dominated field, actually disagreed with Goodwin.

Maybe I’m cynical, but it begs the question: has she never been mansplained to, or is it just so ingrained in society that she didn’t notice it was happening?

Despite the detractors, many men acknowledged that it is a problem.

I ventured into the comments. So many of these responses are just men trying to mansplain mansplaining. The irony.

Lads, we mansplain. It’s real. If you need a man to say it he’s saying it. pic.twitter.com/N2jCWqQkUA

Some even thanked Goodwin for the clarification, because, again: Pictures > Words.

We have this framed in our office for ease of reference. pic.twitter.com/dNaXrrCm19

Several men snarkily asked what to call it when women explain things to them unsolicited, which most people agreed doesn’t matter because of the power dynamic.

But one person on Twitter recently pointed out that while “womansplaining” may not count because of women’s social status with respect to men, they are still guilty of this same behavior because humans gonna human.

White women talk about mansplaining a lot but don’t realise they do the same thing to BIPOC all ??of ??the ??time ??

And THAT, in my opinion, is a very good point.

“Mansplaining” is a cute, fun word and an opportunity to roll your eyes at the opposite sex, but just in general, read the room and don’t assume other people are dumb or less educated or experienced than you are, regardless of gender.

If that’s too hard to remember, keep this handy:

can someone tell me where I can get this in laminated pocket card form? https://t.co/B1VGjgOw1Q

The flowchart is a good reminder for all of us. Because nobody needs to be “splaining” to anybody else, right?

Do you love it? Let us know your thoughts in the comments.