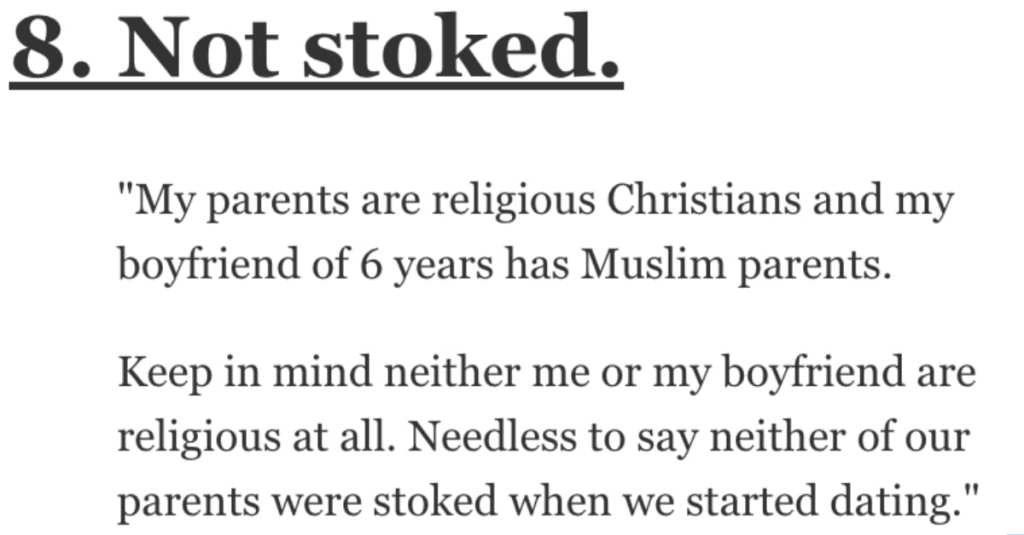 Women Whose Family Showed Prejudice Against Their Partner Shared Their Stories

I’ve heard some serious horror stories from friends of mine about what happened when they brought a person home to meet the family.

Insults, backhanded compliments, and outright insults happen all the time.

This kind of behavior blows my mind a little bit because the people in my family are friendly and laid-back, but it seems to be pretty common.

Female AskReddit users talked about when their family members were prejudiced against their significant others.

“My husbands mom was not a fan of me when we first started dating because I wasn’t Jewish. The first time we met and we shook hands she literally said “you’re not Jewish” not like nice to meet you etc.

His father passed away unexpectedly and him and his sibling were far away. I was the first person to show up at the house, took care of some hard issues that she couldn’t handle in her state of mind- like getting rid of the blanket they wrapped the body in, his favorite drink in the fridge, snacks and so on.

While sitting shiva I overheard a family friend say “…but she’s not Jewish…” and I heard her respond back “yea I learned to not to give a f**k and just see how amazing she is”.”

“I’m white and Christian, partner is Arab and Muslim.

The only parent who supported our relationship is my mother. Lots of ra**sm, stereotyping and the like from both sides.

It hasn’t got better at all in 8 years. We’re on the brink of breaking up though, since partner became extremely s**ist and ab**ive the moment our child was born.”

3. The reason for failure.

“I was in a relationship with a woman for about four years. Her mother and sister didn’t really approve of her dating a transgender woman.

She said all that mattered was how we felt about each other, but it was pretty humiliating having to make myself when they were around or there was an event.

I suppose what I felt I needed was a robust “you need to get with the program” type message to the family, but she just kind of didn’t rock the boat. It was a contributing factor in the failure of the relationship.”

“My husband’s family hated me for 5 years (until very recently) because I didn’t have an Ivy League education and didn’t come from a wealth family (also I’ve had suspicions that my race played a part given some comments from his family but my husband doesn’t agree).

His past two relationships had been with women from Ivy League colleges, so I guess they had that expectation?

Every time I met them, they’d be nice to my face but would complain behind my back. The first time I met them, I asked to help clean up dinner but they told me no since I was a guest. So I didn’t. But then I found out his sister was really upset that I didn’t and even said “I know she’s not from our culture so wouldn’t know, but I can’t believe she didn’t help at all it was so rude.”

Many things like that over the years, nitpicking everything – my parents have health issues and since I didn’t go to and ivy league I cannot possible make enough money to help them and my husband would be burdened with it.

His mom even called him extremely upset when we eloped even though we told them about it and the date multiple times – because she forgot the date and had to find out when he texted her a picture and put it up on Facebook.

Then she screamed about how it was so embarrassing that my ring was so small (I picked it out specifically because it was small and not a diamond) and insisted that she wouldn’t marry him if he had given her that ring. Also made for a great time when we visited and my nieces kept asking me why my ring was so small…

Things finally fixed themselves this past Xmas when we visited them, and my husband called his middle sister out on never taking the chance to get to know me. I think it finally clicked for her that we were married and my husband was getting close to cutting her out of his life if she didn’t at least try.

She let us stay a week with her, and made a huge effort. Almost every night she had an activity for us to do with the kids, and we all filled out personality tests to get to know each other better.”

“I married a man from another country, culture, and religion.

My husband is from a country most Americans have never heard of, if they have heard of it, they have only heard bad things (most of those things twisted and untrue). He is Muslim, his family is Muslim. I left my country, married him, and have immigrated/assimilated to his people.

I’ve been with him 3 years, no one from my family has met him or visited me. Not one person from my family was present at my wedding. I am happier than I have ever been and my husband has nothing but my adoration and respect, but my ties to my family have become complicated and strained.

Everything I want to write here would take too much, it could fill a book.”

“I saw a guy on and off for a few years. He and his family were from Bangladesh.

He refused to bring me around his family because I was white and had tattoos.

I refused to push for anything, and we eventually stopped seeing each other because of it.”

“My in laws didn’t approve of me because I’m of a different ethnic/cultural background and because of the language barrier. They also had someone else in mind for my now husband.

Long story short, he stood up to his parents and married me with my family’s support and blessings. His family came around to accepting me a few months later when they realised I make him happy.

We have a good relationship with them now of course, just a few things still though; they still haven’t been to our place despite it being almost 2 tears since our marriage. And our families still haven’t met lol. I’m happy as long as everyone is comfortable and no drama.”

Needless to say neither of our parents were stoked when we started dating. Both were pretty salty about it and kept asking, “well are they going to convert or what?”.

But as time went on, they all realized that we’re happy together and that’s all they can do, so they’ve gotten used to it and moved on for the most part.”

“My S/O is from an Islamic family but doesn’t follow the religion himself. He isn’t supposed to date until marriage etc. And so I was a secret for the first 8 months.

When his mum first learned about me, her first question was whether I was Muslim… Which I’m not. She obviously disapproves of me as me dating her son is religiously wrong. We offered to get married to make it Halal but she also said no to that. She believes I’m a phase and he will find his way back to Islam and leave me.

I’ve met one of his siblings so far and will meet his mum in a few years probably.”

“I am from Jehovahs Witness family. My BF is not. Parents disapproved.

Mom knows we live together, dad doesn’t. I am waiting for the day when they might stop talking to me cause of this situation.”

“My family hated my husband for the 1st 3 years of our marriage. For a very stupid reason. Because he’s quiet.

My mom is very southern and according to her, someone that doesn’t like to talk is very rude and suspicious. Husband would answer back if asked a question, but only a few words, or he’d laugh at jokes.

He would never ignore my parents, he just would never start a conversation. I explained this to her over and over again. Hes answering you mom, he just hates talking.

Finally, after a few years my step dad had enough of my mom’s b**ching. He actually liked that my husband was quiet because that meant he could talk more. So, we went up to visit and my step dad got husband drunk, and he talked for hours and loosened up around them.

It took 3 years and one drunken night but my mom finally got over his quietness. Now she just starts conversations with him and will keep talking until he answers back enough.

My in laws hate me for a completely different reason but that’s a story for another day.”

If so, talk to us in the comments. Thanks!