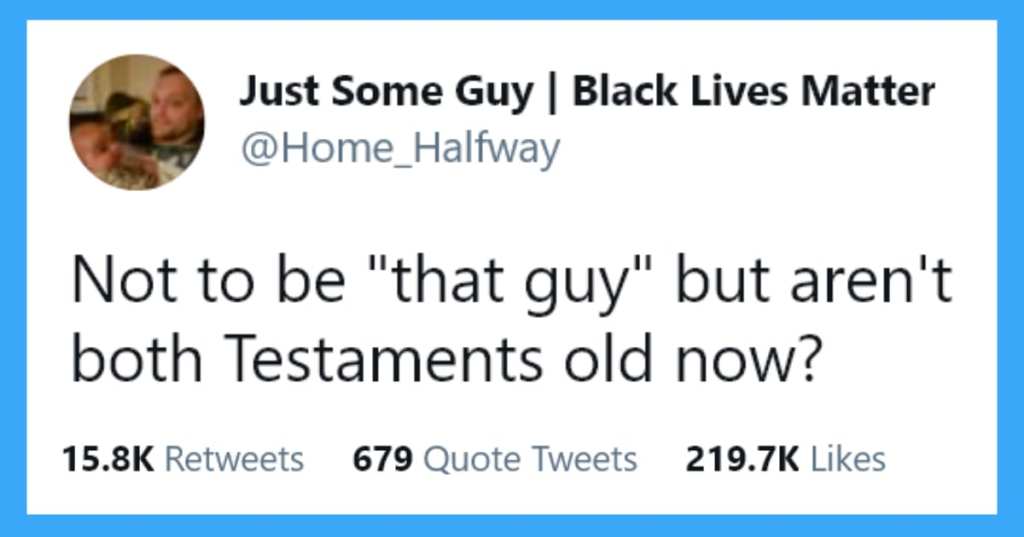 10 Posts That Are Aggravatingly, Technically Correct

Things that you can’t deny, though every fiber of your being wants to, because they’re just too pedantic to warrant acknowledgement.

And yet, you gotta give it up. Here are ten posts that are gloriously, technically true.

Being correct while missing the entire spirit of the post, attaboy.

Those all start with i

If you put #pizza on top of a pizza, you'd have 2 pizzas. But if you put a lasagne on top of a lasagne, you'd still have 1 #lasagna. – WhatsApp

There’s a theatre in my hometown called The New Theatre.
It’s been around for more than 50 years.

Not to be "that guy" but aren't both Testaments old now?

This is a great example of why statistics without context can be less than useless.

Has someone informed Jim Gaffigan of this?

YOU CAN ONLY BUY COLD POCKETS

YOU ARE EXPECTED TO SUPPLY THE HEAT YOURSELF.

I’ve seen this posted so many times and like…where are you getting that number from?

3 bullets colliding in the battle of Gallipoli in 1915.

That’s gonna be the name of my Rush cover band.

This is what you get for leaving your prompts so open ended.

The game has been changed forever.

Those are some good, technically correct posts. But we’re done now. Or rather, we’ll be done in 41 words. Because I’m still typing, and there are a couple more lines to go.

What’s the best technically correct thing you’ve encountered lately? Was it said by you or by someone else?