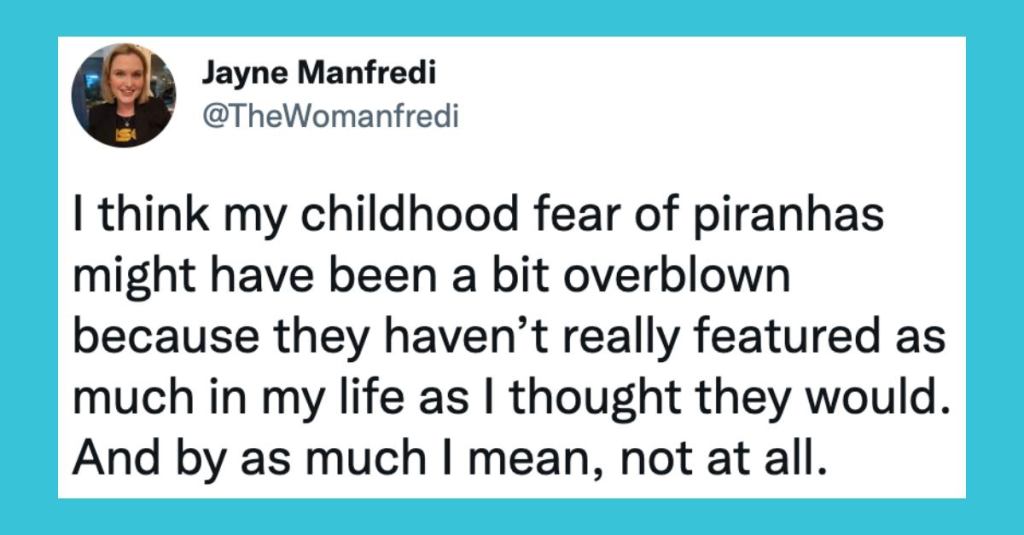 11 Funny Tweets From People About Their Childhood Fears

What were you afraid of when you were a kid?

The dark? Spiders? The creepy black van that used to cruise around your neighborhood at night?

Anyway, enjoy these funny tweets from people who admitted what they were afraid of when they were growing up.

Didn’t work out that way…

2. Watch out for quick sand!

This was a classic.

For those of us a certain age, it seems inconceivable now how much of our youth was spent fixated on quick sand and what to do if caught in it. What was that about? Did it go away? Was just explaining it to a kid and he thinks we were all on drugs. Were we? It was huge deal then.

Did anyone else have an irrational fear of Venus flytraps as a kid or were you normal ?

Don’t get in the water!

Contrary to childhood education, falling anvils, pianos, and safes have not been a significant danger in my life.

My health anxiety is quite bad at the moment but at least I no longer have the constant fear of spontaneous combustion which took up a significant part of my childhood.

Question for 80s babies: did y’all have an irrational fear of quicksand? Where did it come from? Why was it in so many television shows? Where can one even find quicksand?

I think my childhood fear of piranhas might have been a bit overblown because they haven’t really featured as much in my life as I thought they would. And by as much I mean, not at all.

10. I saw Poltergeist too many times.

Anyone else as spooked as I was reading The Face on the Milk Carton as a kid?

What were your funny childhood fears?