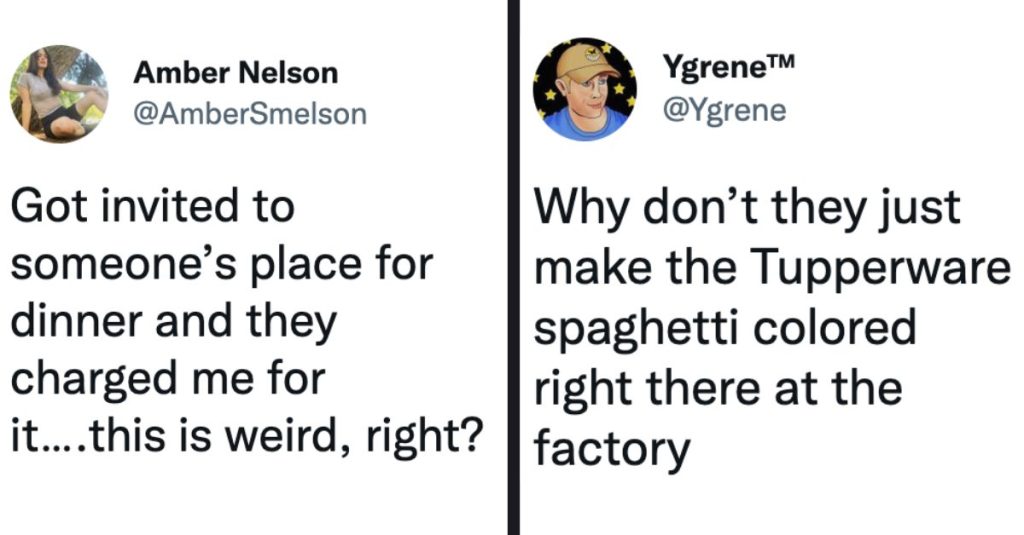 11 Hilarious Tweets to Sink Your Teeth Into

Don’t you just love it when a tweet is so funny that can actually sink your teeth into it?

It never gets old!

Today is your lucky day because we have 11 tweets that are HILARIOUS.

This kid is smart.

Nephew: “What that mean?”

Nephew: “So why don’t you have a husband?”

this exactly how planning shit with my friends goes pic.twitter.com/wBIwCJNUqi

3. Going back and forth.

We all do this…

It’s crazy that somedays I tweeze my eyebrows, shave, put in my contacts, blow dry my hair, pay my credit card bill before it’s due, eat salad with dressing on the side & go to a workout class & then somedays it’s like…what’s the point of a shower who even cares give me potatoes

Has anyone sincerely thought “oh, good a musical episode” when watching a non-musical show?

You’ll get there someday…

I was the only one who would bake with my grandmother. When she died she left her best recipe to everyone except she deliberately left out a crucial step as payback. That’s the level of petty I aspire to.

6. This is how social media works.

reddit: my [21F] boyfriend [53M] boyfriend forbids me from going into the basement and has a sock drawer full of missing women’s driver’s licenses, AITA for being uncomfortable? the wedding is in three hours

7. This is a brilliant idea.

Why didn’t I think of this?

Got invited to someone’s place for dinner and they charged me for it….this is weird, right?

at the gym, a person with huge biceps and loud voice started talking about playing RDR2 for the first time, I said it was one of my favorite games and this person did that thing I haven’t seen since 2009 and asked “YOU play video games? *scoff smirk*”

So I told him the ending

What’s the world coming to?

friendship breakups are wild cus damn. u gave ole boy 45 chances but me? i’m done cus i ain’t come to the cheesecake factory? ok.

Well, that was nice!

When I was 17 I tore my pants hopping over Rockies stadium fence and then cried in the rain on the curbside and a nice man thought I was homeless and gave me his coat jacket to keep.

Have you seen any funny tweets?

Well, don’t keep them to yourself!