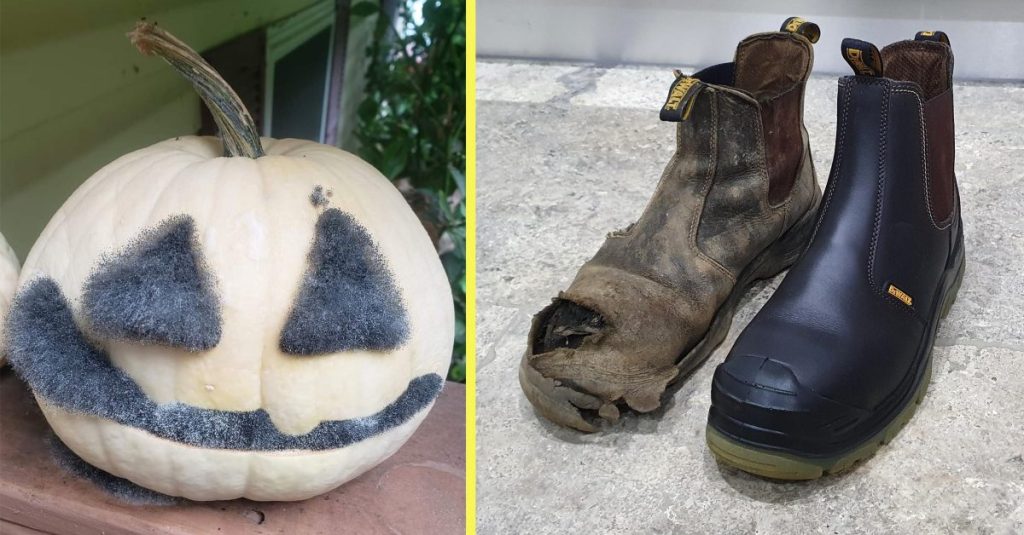 We like to believe that our world is made of the strongest stuff, but the truth is that it’s nothing compared to what Mother Nature can do if you just give her some time.

These 11 things were once shiny and new, too, but over time the weather and the elements have taken their toll – and now they kind of look like relics from the distant past.

1. I wonder if those still spend.

Nature will eventually fight back. Ha!

Nature swallows a car in Hawaii. from mildlyinteresting

3. You’re telling me that’s not a painting?

The wear and scuff-marks on this boat look like an island in the sea. from mildlyinteresting

Obviously, I don’t let my pumpkins rot for long enough on my porch.

This jack o lantern with mold growing from inside from oddlyterrifying

5. Removed by who? Pennywise?

I have a feeling this sign is very effective.

This sun-worn sign outside my office that looks like it belongs in a horror film. from mildlyinteresting

6. I honestly didn’t know this was possible.

Are we sure those are the same knife?

The knife at the left was used by a butcher for 5 years straight. The one at the rightis the exact same knife, but brand new. from Damnthatsinteresting

7. They tell a whole story.

One that is hopefully changing.

Bathrooms at my engineering university. from Wellworn

8. Those must be her lucky cards.

You can pry them out of her cold, dead fingers.

My nana has been using the same deck of cards for 10 years and they’ve all grooved to her hand placement during shuffling. from mildlyinteresting

9. Those work boots deserve a retirement.

I want to know how many years he wore them (or how hard he works).

About time I bought some new work boots from Wellworn

Seriously, you could probably wear some of them still.

I just think about how many hands have touched it over time.

The one and only basketball that lives at the local park and somehow still bounces. from Wellworn

I love images like this. It appeals to my tendency toward existential dread.

Have you ever run across something like this that surprised you? Tell us about it in the comments!