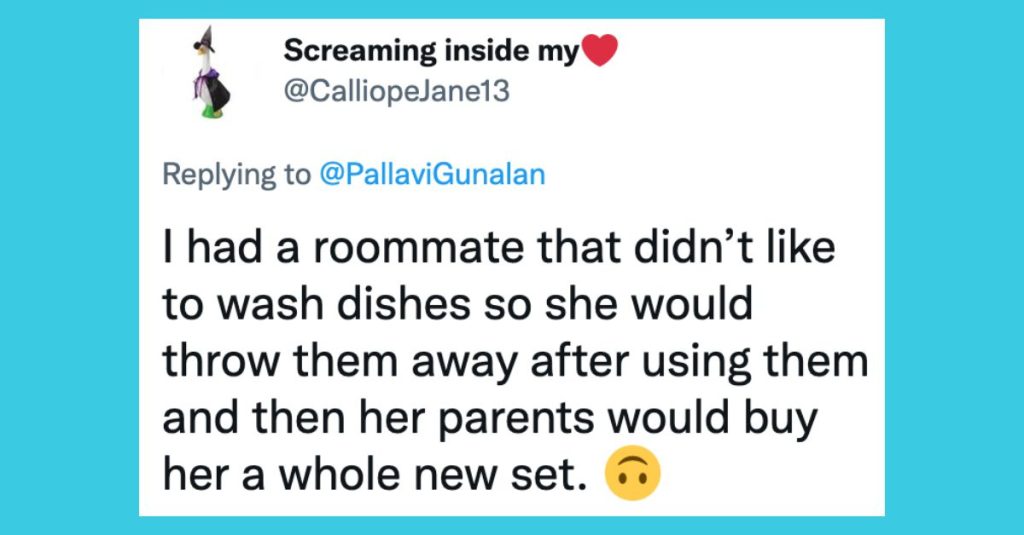 11 People Who Did Really Silly Things

Fact: we all do dumb things in life from time to time…

And some of us do them more than others…yes, I’m looking in the mirror right now…

Anyway, enough about me…

Let’s enjoy some funny posts about people who did DUMB stuff!

How many burritos can you go through?

I had a roommate that didn’t like to wash dishes so she would throw them away after using them and then her parents would buy her a whole new set. ?

I knew a girl who hated getting coins as change so she would just throw them away. In the trash can. ?

4. Just go buy another one.

I had a boss who forgot his email password while using his iPad. He got frustrated and said he’ll just buy another iPad ?

I saw my girlfriends roommate try to boil water for 15 minutes on low. She said she didn’t like using high heat because the coil turned red.

I’m not your mother!

My roommate asked me heat up his pizza rolls bc “he doesn’t know how to use the air fryer for them”. When I told him the instructions are on the package and I’ve seen him do it before, he slammed them into the tray so hard my counter shook, then sauntered off. I’m not your mom???

Had a friend drank 2 much/puked in her purse a few times bc she was aware enuff 2 know not 2 mess up the person’s car she was in. Somebody said “that’s a couple of times now that you’ve thrown up in your purse”. She said “Yeah, I need to start carrying an extra purse”.

Straight from the ocean!

My husband once inherited an entire stereo system from a friend because friend didn’t know how to program the clock and was just going to throw the entire system in the trash.

— Courtney Cantrell wants the govt out of her uterus (@courtcan) March 3, 2022

I had a friend who thought the moon was the sun seen at a different time of day.

She made a lot of money in finance.

My brother once stared in a mirror for five minutes because he couldn’t figure out why his hair parted on different sides in the real world and in the mirror. Same brother, in his 20s, called 911 when his power went out.

Okay, be honest with us…