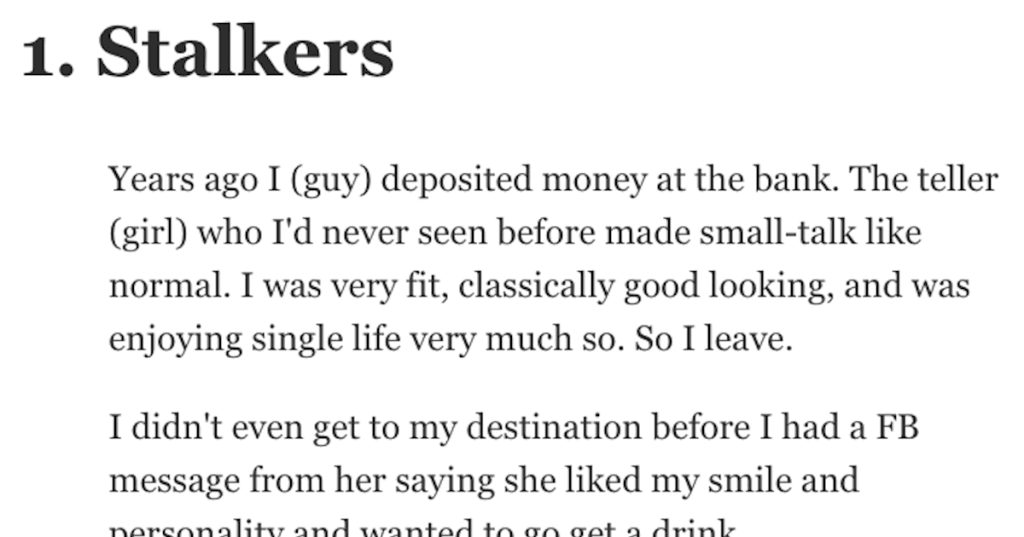 Are you a guy? Do you like to do “girly” things?

Every single person on the planet likely answered, “Uhhhh, yeah,” to both of those questions. And you know why? Because that is HUMAN NATURE. And there’s no real rhyme or reason why certain things are gendered, while others are not.

Today we find ourselves in a world where people are shamed for just liking what the like, and that’s really, really, really annoying.

These 12 people get it! They’re fed up, so they’ve taken to the internet to vent.

Girls have to watch what they wear just to go to school?

I get it if an outfit is really revealing or not age appropriate but I knew so many girls who got sent home because a bra strap was showing beneath a tank top or they had spaghetti straps in summer etc.

I got sent to detention for having 2 earrings in one ear once when the guy right next to me had the exact same i just happened to be in a skirt.

As a man who was in an abusive relationship, f**k man, the fact that I had to defend myself before gives me unending anxiety because A. I feel like a monster, and B. I’m always terrified about what other people will think, especially new relationships.

It really really f**king hurts to know that I’m going to forever be the villain in some people’s mind because I couldn’t handle being hit, or kicked, or scratched anymore.

A professional acquaintance of mine was complaining about being reported on Facebook for hate speech for repeatedly talking about “killing all men”. 40+ comments were left supporting her and telling her to “keep fighting the good fight”. This was from a circle of people that I had until that moment thought reasonable. If I, as a penis owning individual, were to take issue with that, I would be told to f**k off and grow a thicker skin by most men and women I know.

If I, on the other hand, started red-pilling all over Facebook and talking about how all women should be killed, regardless of the reason, I would lose all of my jobs and all of my friends. These are not only conversations I have to deal with on social media, but at my f**king workplaces too.

Why the f**k is it okay for you to be terrifyingly sexist if you have a vagina? Stop painting men with such a broad brush, because you’re hurting and scaring a lot of us.

When a man is an expert in his field, he’s well respected. When a woman is the same she’s a bitch and doesn’t know what she’s talking about.

I have spent the last 15 years running a piece software that I am one of only 3 experts in in my country, but when I explain to users how they’re breaking the software (after they’ve crashed it because they didn’t listen), I don’t know what I’m talking about & we should call the vendor. the vendor gets on the phone and asks why were calling, because I’ve been working with the software longer than the vendor’s entire tech support team.

I know some phenomenal fathers who only get limited visitation because mothers make the father look bad.

Guys on Tinder: Perhaps a fit lady with tanned skin.

I’m in a family of 4 boys. Every time we all go to the store or something like that, the cashier always says “Wow four boys… and no girls?” And after my mom says yes they always say “Oh I’m so sorry for you!!” But I’ve never heard that said about girls. It’s just rude.. like they’re trying to make us feel like a big burden because we’re boys.

When I (a woman) say that I never want kids I’m instantly hit with “you’ll change your mind” “that’s your purpose in life” “you’ll be lonely” “your maternal instinct will take over” but when a man says it it’s completely fine and acceptable ?

Obviously not all men and men still face this issue too, I’ve just noticed it’s more prominent when women say it.

The stupid stereotype that women stop wanting sex when they get married and neglect their poor suffering husbands.

It’s total bs. There are just as many women crying themselves to sleep at night after their husband has rejected them for the 5 millionth time. And there are also tons of happy marriages where both partners feel happy and fulfilled. Every single marriage doesn’t end with a frosty wife and a frustrated husband.

Same sex relationships between women are not taken seriously, which is bad because they could be kissing their girlfriend and people will start pushing that they are “such good friends!” or “just showing off for the boys!” or “just haven’t found the right man yet!”

On the other hand, with men it is taken so seriously (and negatively) that straight men are afraid to even touch each other in any way that may be seen as gay (because apparently many of them think that’s the worst thing ever.) “Hugging? Dude that’s so gay!”

2. The Gifts That Don’t Keep On Giving

My grandma automatically assumes she knows exactly the perfect gifts for me just because I’m a girl.

I recently mentioned to her my dream car would be a black/silver Jeep Renegade (we were talking about how she wanted to buy me a car for my birthday, she didn’t though at my request). Her response? “Oh I would NEVER have gotten you something like that, it’s too boxy for a girl like you, and I just associate black and gray with boys, which you’re not.”

What in the actual fuck? I fucking HATE white cars.

I’m so pissed that she would try to spend a sh*t ton of money on a car without actually thinking of my preferences as a human being, and instead making general assumptions based off of the fact that I’m a girl. I still would have been grateful of ANY car she would have gotten me, but it still INFURIATES me that my first car could have been bought for me based on things like that.

I look forward to the day when I can buy my own car, and I can get one that represents who I am as a person and not just a girl.

Years ago I (guy) deposited money at the bank. The teller (girl) who I’d never seen before made small-talk like normal. I was very fit, classically good looking, and was enjoying single life very much so. So I leave.

I didn’t even get to my destination before I had a FB message from her saying she liked my smile and personality and wanted to go get a drink.

I was really uncomfortable so I just deleted it. When I got back and told my friends about it, all 7 unanimously went off about how I wouldn’t have cared if she was cute (spoiler: she was very cute) and how I need to stop being an a**hole. If I had carded a girl and remembered her name to stalk her on FB to ask her out I’d have been labeled super creepy and they’d have stopped talking to me.

But when a girl uses my bank info to find me I’m the a**hole because I was promiscuous at the time.

Let us know in the comments, fam! We always love to read what you have to share.