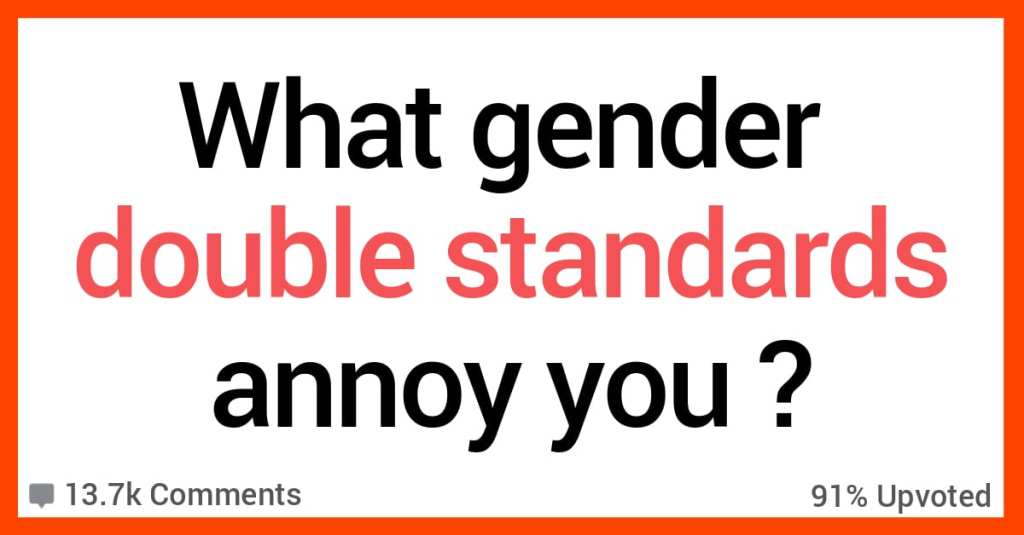 The way we look at gender these days is interesting, and because we’re having all these discussions about what it means to be a man or a woman or fluid… it brings up the very obvious discussion about what kinds of things are expected of these genders… and how that’s nonsense.

I mean… boys play with dolls. Girls play with cars. I’ve seen it. I’ve DONE it. But for some reason, people get weird about it. Still to this day, they don’t like it. Why!?!?

The following 15 people share the things that they really don’t like about how genders are treated differently, and I can’t say I disagree.

I grew up overseas, in a country that doesn’t really encourage personal vehicles. We have a lot of public transport. As a result, my mechanical knowledge is extremely poor.

My white girlfriend, who grew up in the sticks, and who’s dad is a mechanic, has tinkered with cars all her life. Every time we walk to an auto parts store to get stuff, the employees never talk to her. Even if they ask me a question and she replies, they continue acting as if she doesn’t exist and keep talking to me. It’s unreal. It’s as if they don’t see her.

She’s gone to job interviews for mechanical jobs where the interviewer asks her very basic and belittling questions because they don’t believe she can understand mechanical stuff. Meanwhile up until last year when I met her I didn’t know what a ratchet was…

2. Because You’re a Girl

When I was a teenager, I was not allowed out of the house to walk to the local shopping center to hang with my friends (all male). My mom told me it was because I’m a girl and I’m way more likely to be attacked on my way and if I was a boy it’d be different.

In general since I was 12 up to now, when walking alone in public I was very frequently sexually harassed and I’m not sure if the same thing happens to men.

This is a double standard, but it’s also just a Hollywood trope that some dads think they’re supposed to do and it’s incredibly creepy.

When I was in high school at least a couple dads would say things like “just remember I know how to shoot” and “if you break her heart I’ll break you” etc.

Sometimes it’s just dads thinking they’re cute when they do this but I’ve received at least one legitimate threat by a dad thinking he was doing his dad duty.

Keep in mind that as a teenager I was very small and not at all in the “bad boys” clique, but if you are actually worried about your daughter’s boyfriend harming her, then don’t let her date them. Don’t just blanket threaten a bunch of minors.

I am a female teacher.

I only know one man who is a kindergarten teacher, and people constantly make comments to him about how “women must love it that he is so good with kids” and he will be a great dad.

As if he is only in the job to impress women?

Nobody says this sh*t to me.

Not allowed to do “guy” work at work. As in, I can easily fix what is broken with some wrenches right now, but no, “male coworker x” will do it next week.

I got turned down for a job at the state park because it involved occasionally lifting 50lb bags and well, girls apparently can’t do that. (I move 300lb barrels at my job now) The state park did offer me a different job, working in the office, by myself, until 11pm. I was 16 at the time. But hey, office work is for girls, so that’s a better fit.

And if I do any of this super difficult guy work, I’m seen as some sort of butch lesbian, because regular straight girls can’t do that stuff.

She was not arrested, and no charges were laid after she literally bit another human being and was trespassing on our property, and seemed to be either on drugs she shouldn’t have been or needed drugs she wasn’t on.

My security guard was furious about the situation and said ‘if that was a guy, I would have fu**ing knocked him out long ago’.

I’m not advocating for women being hit for things that a man would be hit for, I’m saying that it’s very frustrating to see that the same patience and restrained wouldn’t be shown to a man who did the same things.

It’s a tough situation because I don’t think either gender gets treated well in that situation. Women are dismissed as crazy, men are simply hit and dismissed. There has to be something in between that works for both.

When I was a teenager, I worked with these two girls who were extremely sexually aggressive- one who had a thing for me and her friend who egged her on.

When I finally made it clear I had no interest, I was hounded and called every name in the book for the rest of my time there, had my sexuality questioned daily, etc.

I finally complained to my manager, who responded with, and I will never forget this:

Guy here. One double-standard that I’ve benefitted from but I still find very saddening: guys being praised as being “great with kids”… for doing the bare minimum.

I used to date someone who had a very young sister (around 7 years old when we started dating). I remember taking the three of us to see a Disney movie at the theater, I was holding the little sister’s hand while we were waiting in line, and a woman in line behind us, apropos of nothing, says to me: “I can tell you’re going to be a great dad.”

She didn’t say “I can tell you two are going to be great parents”. She just said it to me. For holding a kid’s hand to keep her from wandering off.

She was also wrong, I don’t want kids ever. But more to the point, it just made me sad that, apparently, the standards for being a “good parent” are so much lower for men than for women.

This one may be a little odd, but I’m a female bartender who works with one other woman and four other guys. For some reason it’s okay for men to “tease” us ladies when we make drinks, but I haven’t seen that happen to the guys I work with (it might happen too, but maybe not as often). I currently work at a country club, but I’ve worked at chain restaurants and dive bars too.

Its really frustrating to be busy and hear some condescending pick up lines about ‘how does someone like you know how to make -insert really basic drink here-‘ and its shocking the amount of people that want to give me pro-tips on pouring beer and whatnot. This obviously isn’t every guy out here doing this, but there has been at least one of these guys at each bar I’ve worked.

Jesus Christ I just want to look good and up to date, I don’t want to look like my father who has the same suit since the day I was born.

Just let me have nice clothes.

The problem is, when a man wants to be stylish/look good he is often called gay, but when women want that it’s all good.

One I do not care for is dress code double standards.

I had a job where every day men had to wear a dress shirt (Had to be an actual dress shirt with a stiff collar, button-down collars were not allowed), tie, slacks and lace up shoes. You could not loosen your tie or unbutton your collar or roll up your sleeves, which I never minded honestly.

When clients visited of course it meant a full suit, a vest was strongly encouraged (Meaning you would hear about it in your next review if you didn’t wear a 3 piece suit for visits).

However, the women would wear short skirts, sandals and t-shirts.

Allow me to expand on this….

Dress codes are fu**ed for both men and women.

In a professional environment Men will boil in a collar & tie while women will freeze their asses off.

While it can be uncomfortable to wear a collar and tie for 9-12 hours a day, heels enter the chat and laugh, because nothing i worse then compulsory high heels for women, literal, measurable bone & cartilage damage.

Also, dress codes seem to be written for men, because it is easy for a man, the easiest, you know exactly what you are supposed to wear.

Telling a woman that a dress code is business casual is like giving them a 5x5x5 Rubik’s cube to solve on What the fuk does that even mean?!

So please, nobody take offense on anything regarding genders in this topic, it is screwed all the way around.

I say to fix it, drop gender specific clothing. I would love the freedom of saving 20 minutes by just slipping into a sheath dress instead of a full suit.

That men are encouraged to have sex starting young, and women are highly discouraged and told to stay virgins.

Not only is this making women feel shame for having very human sexual feelings, it’s also forcing young men who may not be ready for sex to feel inferior if they don’t.

I grew up with the whole “be a virgin until marriage” mentality.

As a result, I have a horrible dating life because the idea of intimacy makes me anxious and ashamed.

I’m a guy and my hair is long as hell almost to my hips.

It’s not greasy or weird, it’s professionally kept but I’ve been told at multiple job interviews how unprofessional it is and I need to cut it.

Doubt they would ever tell a woman with a pixie cut that she needs to grow it out before getting a job.

Romance is alive and well, it’s just that men deserve to be treated to a picnic in the park every now and then too.

I think a lot of relationships would be a lot happier if women set up more romantic gestures in general.

“Oh so your baby sitting the children today?”.

No. I am the father. I am parenting, I am not a baby sitter.

Also, lucky enough it have a bit and girl, we let them play with whatever they like. My son loves playing with dolls as much as he does trains and my daughter loves dinosaurs as well as dressing up as a princess. The grandparents (all sides) seem to discourage anything they see is inappropriate for their gender.

I have intervened Inna number of occasions telling them all they are just kids, they will play with anything they find fun.

So friends… those were a few of the double standards that strangers on the internet wanted to share. Now we want to read yours!