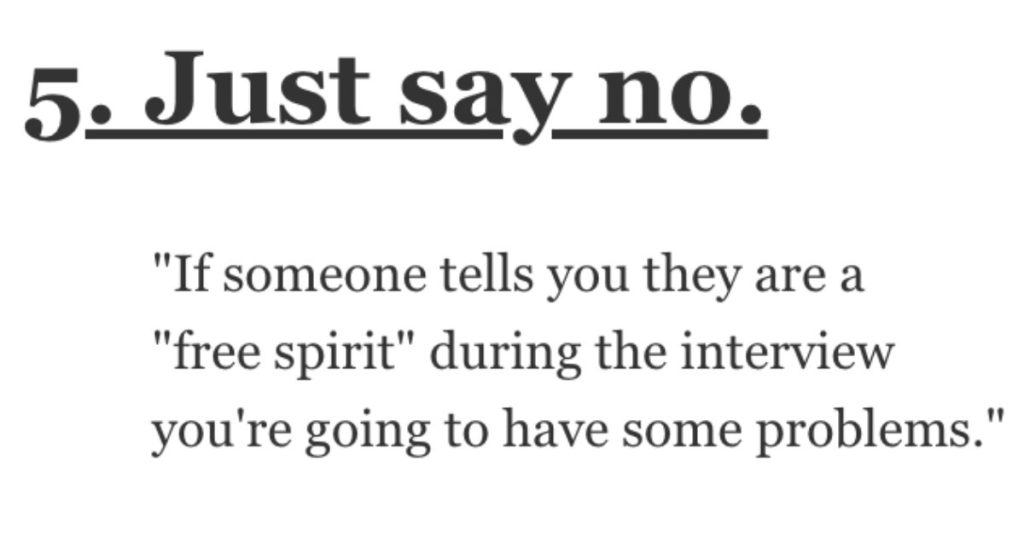 I personally think that it would be really difficult to be a hiring manager.

Sure, people can look good on paper and even do well in interviews, but you really don’t know what you’re getting from an employee until they actually start working.

And that brings us to today’s story.

Hiring managers talk about the red flags they missed with employees that ended up costing them later on.

“I actually hired someone who was late for the interview. Her apology was totally reasonable and I looked past it because she seemed like a good fit.

A few weeks into the job, it came out that she didn’t know what time zone we were in.

That’s not the reason she was late, but it did turn out that her understanding of time and clocks was insufficient for a job where scheduling things across time zones was a primary responsibility.”

“‘He has family in upper management’ was a red flag.

His dad was an executive.”

“One applicant had this weird, sort of arrogant body language during the interview. But, because they looked great on paper and otherwise interviewed okay, I wrote it off as anxiety or something.

Joke’s on me, because that person ended up being the whiniest, snottiest, most vile individual. Thank God they found another job before I had to let them go.”

“One candidate gave some very thoughtful, insightful criticisms of his current workplace. We appreciated his candor, and the content of the critiques were perceptive.

When we hired him, we realized that while he spoke well and appeared intelligent, all he could was criticize everything — even when his criticisms made no sense.”

“If someone tells you they are a “free spirit” during the interview you’re going to have some problems.”

“I used to do hiring for a small store and the biggest red flags were ‘too good to be true.’

Candidates who claimed they loved the public, never had any problems with coworkers, and were never late or absent invariably caused the biggest problems because they were lying through their teeth.”

“Ran a grooming shop with my ex-wife. We hired this lady who seemed a little high-strung, but we needed the help.

Some customers swore that they recognized her from a while back at another shop, but she denied ever working there, and seemed oddly defensive about it.

One night, we found reviews on our Yelp page from one of her neighbors who she was fighting with. The neighbor specifically called her out in the reviews and spilled about how she was responsible for the d**th of a customer’s dog.

She walked away from the table for a break, the dog fell with the harness around its neck, and the dog d**d. We fired her immediately for lying to us and bringing her drama to our business.”

“People who speak in superlatives rather than answering questions directly — it was a red flag.

Turns out the guy, while super excited to work for me, still didn’t understand the role.

I ended up firing him the last day of his 90-day probation period despite spending an enormous amount of time with him trying to get him right.”

“When I worked in a liquor store, my manager hired someone that they knew to have lost their license from driving under the influence.

They turned out to constantly turn up to work late, never wore the correct uniform, would eat popsicles while serving at check out, and caused a lot of tension between staff by hooking up with various managers.

In the end, she was fired for stealing products. Not surprised.”

“During the interview, he said, ‘I was fired from my last job because my previous boss didn’t like me.’ I hoped it was just a one-time incident, which he led me to believe. I understand why now.

It wasn’t just a problem because of his last boss, he turned out to be the problem. Also, fun fact, he used my company cell phone number to sign up for every auto-dialed and telemarketing service on the planet.”

“I manage a restaurant kitchen. I’m not the only one involved in hiring decisions. The biggest mistake I’ve made so far was hiring a guy who got irrationally defensive and had issues controlling his anger during the interview.

Ultimately, his extensive experience in kitchens won out over my instincts. He started a fight that put two of my other cooks in the hospital one night after we closed. Also managed to break about $1,300 of equipment in the process.”

“He described himself as passive-aggressive as a strength. The rest of the interview went well so we hired him. Supervisor position.

Turns out he was SUPER passive-aggressive. And not the way he meant it. Wouldn’t deal with issues, walked out of the room during a meeting with his boss, and kept calling the wrong person when he had questions even though they kept telling him he had to call his direct supervisor.