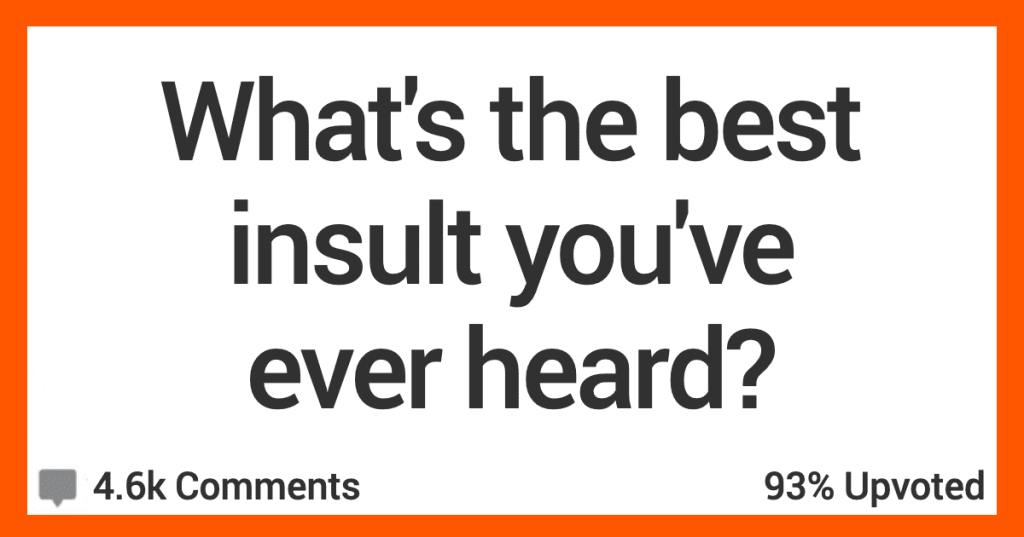 I once heard a kid call another kid…wait for it…an “incredible edible egg.”

And the person he said it to wasn’t very insulted by it.

But now we’re gonna switch gears and hear from people about the BEST insults they’ve ever heard.

“A neighbor was being accused by a woman of being his lover, all of this in front of his wife!! he did the worst thing he could in his defense: insult the woman. He said:

That was both hilarious and insulting and kinda made everyone’s eyes on him. The wife threw him out anyways since seemed to be evidence in his phone. All of this in the hallway of the apartment building.”

“My three favorites are…

You’re a real conversation starter. Just not when you’re around.

I can’t believe out of a hundred million sperm, YOU’RE the one who won

I bet your parents change the subject when people ask about you.”

“Guy singing and playing the guitar.

Passerby: do you take requests?

4. Limbo with the devil.

“The bar was set so low it was a tripping hazard in hell, but you somehow managed to play limbo with the devil.”

“Winston Churchill was d**nk on a bus.

Lady: Sir you are drunk!

Churchill: and you madam are ugly, but in the morning I shall be sober!.”

“For some reason this one was always my favorite:

“I refuse to engage in a battle of wits with an unarmed opponent”.

““You’re so ugly you could be a modern art masterpiece.”

My dad and I use that one on the daily.”

“The harshest I ever heard given the context, was when a teacher pulled a student out of class to tell him ( btw I was a part of the class in the open space outside that classroom) “Your parents should’ve gone downstairs and watched some TV the night you were conceived”.

Me, my mate and some nearby teacher were SHOCKED.”

“My sister was gaming w her friends and told one of them “I’m doing charity work just talking to you”.

I completely lost it and give her major props for saying some stupid s**t like that hahahaha. She was 13 btw.”

“Somewhere out there is a tree, tirelessly producing oxygen so you can breathe.

Find it, and apologize to it.”

1st guy: “what year is that truck?” 2nd guy responds with the year his truck was made 1st guy: “hmm, I didn’t know they had a problem with the turn signals that year.””

“I’m physically disabled and a stranger asked me how I have s** and I responded with “why, are you looking for pointers?”

And it’s the smoothest thing I’ve ever said.”

““You could jump from your ego to your IQ and commit s**cide”.

Heard it somewhere before and used it once, came flying out of my mouth so fast that I was shocked alongside the person I was insulting.”