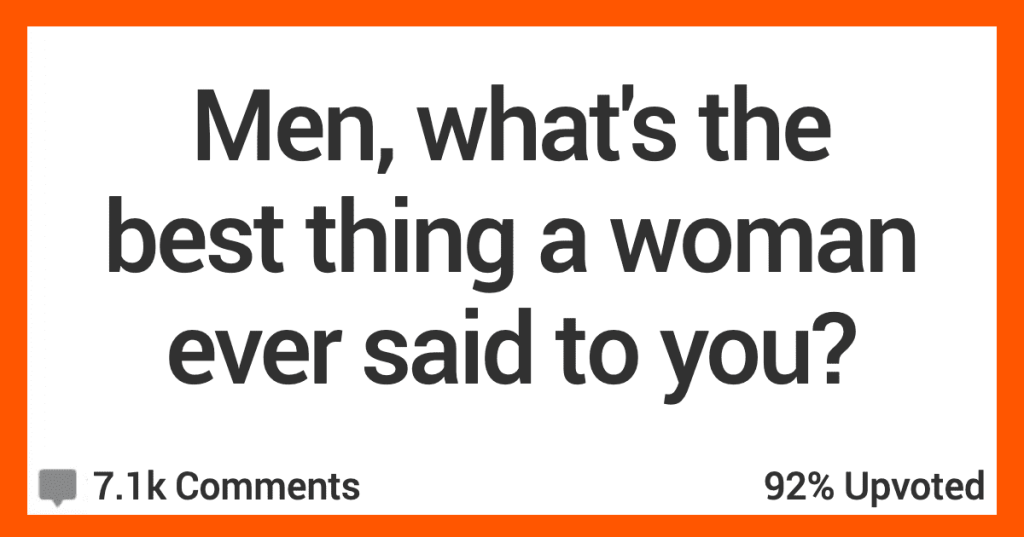 Ladies, I’m gonna let you in on a little secret: guys love to be complimented just like you do!

It makes us feel all warm and fuzzy inside and it makes our confidence go through the roof.

So read these answers from men on AskReddit about the best things women ever said to them and maybe you’ll want to use some of them on your fella!

“”I did not give birth you and we might not match on a DNA test, but you are my son no matter what anybody says”

Said by my best friends mum. She has been like a mother to me all my life taking care of me while my mother’s alcoholism escalated over the years.

I love her by all my heart and when she said it I just started crying. I never doubted her caring but having the verbal confirmation was just so touching.”

“I graduated college 10 years ago.

I still think about the time someone told me 8 am classes suck less with me there.”

“I have been accused of having “honey” and “iced tea” eyes by two separate women and that is a self-confidence boost I still keep in my back pocket.”

“When my wife was d**ng of cancer, she had one of those bitter evenings where she lashed out at how unfair for her to be fighting for her life at age 39.

She was lashing out at how unfair for her children to grow up without her and for her to miss seeing the adults they would become. She shared how every single moment of every day was full of struggle, pain, and fatigue—and she was bitter and angry about it.

I told her something I’d felt ever since she got sick—that I wished cancer took me instead.

She looked at me through her bitterness and pain and said, “I would never want this pain to happen to you.”

That was the most selfless, loving thing I’ve ever heard, and it helped me so much as I dealt with survivor’s guilt after she d**d.”

“My girlfriend in college once gave a valentine’s day card. In it, it said, “I’m glad I met you”.

Seems a bit unromantic, maybe, but this gal was always awkward at expressing herself (I was too). A lot of people say “I love you”, and don’t mean it – sometimes they think they mean it.

But when she wrote “I’m glad I met you”, I knew she meant it… like, she really meant it. She was all nervous to give me the card too. I thought it was very sweet, and I couldn’t get the card out of my head for weeks.”

“A friend told me she preferred how I looked bald rather than when I had a ton of hair and that I was a great looking bald guy.

This meant so much as I am bald due to alopecia areata and legit used to have thick flowing locks so it was a hard process choosing to shave my head that first time.”

“Random girl from work, told me I looked good and asked me what I was doing to loose weight.

I had never ever gotten a compliment like that before and it felt good. Made me more motivated to keep on track.”

“A girl in my class said “You’re a sweet, adorable and a nice person”.

Also my best friend’s mom (we weren’t that close back then) said that I’m a good man and she trusts me with her daughter’s life. She said that if she had a son, she would have wanted him to be like me.

What her mom told me has had an effect on me and I actually teared up a little on hearing it. My mom never said she was proud of me.”

“I had a girl compliment my jacket a couple of years ago and I’m seriously worried about what I’m going to wear when it finally gives out.

I don’t know if I can go back to clothes that haven’t been endorsed by a casual female acquaintance.”

“My sister’s cute friend said I looked handsome at my sister’s wedding.

Been riding that high for almost 6 years now.”

“Oddly enough, it was an apology from an ex’s former best friends.

Long story short, my ex was a legit psychopath, she uses people and throws them away on a whim, and was a supposedly recovering heroin addict (I, like an idiot, ignored all the red flags). She went out of her way to try destroy my life, going as far as court (fortunately the judge saw through her).

After she tried to ruin me, she apparently tried to ruin her friends as well. 2 of those friends reached out to me after to apologize for ever believing a word she said.

It helped me cope with what happened and the PTSD that resulted from it all knowing that they understood what she did to me and were sorry for ever having been a part of it.

Not exactly the most feel good story, I know, but I’d be in a much, much worse state right now if they hadn’t gotten in touch to reassure me that I wasn’t in the wrong.”

““You’re an amazing father, and I know you’ll continue to be one.”

—My wife just before cancer claimed her life.”

What’s the best thing someone ever said to you?