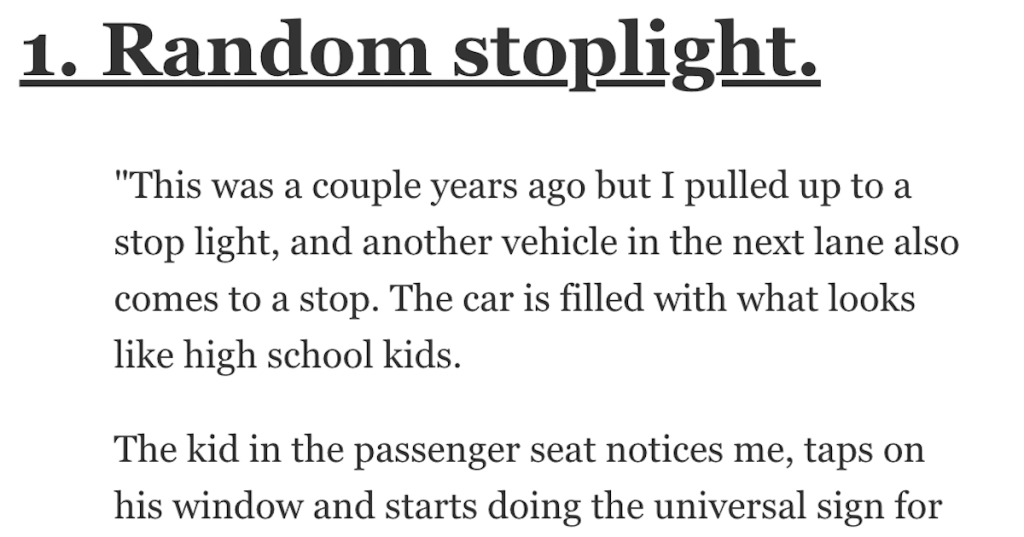 What an Outrageous and Funny Memory You Have? People Shared Their Stories.

Do you have a story in your arsenal that seems to be too outrageous for other people to believe?

If you do, we want to hear about it in the comments!

But first, let’s see what AskReddit users had to say about this.

“This was a couple years ago but I pulled up to a stop light, and another vehicle in the next lane also comes to a stop. The car is filled with what looks like high school kids.

The kid in the passenger seat notices me, taps on his window and starts doing the universal sign for rock, paper, scissors. I look at the light (which is still red) and immediately think f**k it and play along so we start. 1..2..3..shoot and we tie.1..2..3..shoot, we tie again.

This keeps happening. All the young kids in the other car are involved and are screaming like “WOOOOOAAH” everytime we tie. We literally got off like 15 rounds of rock, paper, scissors and tied every single time until the light turned green.

I’m still high from that and hope all those guys are doing well.”

“I once checked in at a restaurant and gave the hostess my name to hold my slot, she then asked for my last name since the person below shared my first name.

“Started college. Saw my brother’s best friend on campus, from a distance. Hard to miss: Nate’s 6’6″, skinny, long brown hair. Fitting of our childish friendship, I straight up open-field tackle the guy. From behind. Blindsided.

It’s not Nate. I apologize, and sheepishly run away. Three hours later, a girl friend from high school introduces her new boyfriend to a group of us. It’s the guy I tackled. Danny. Super nice (and forgiving) guy.

“I was in elementary school, during recess, just kinda daydreaming and looking at some ravens flying overhead, when one of them suddenly took a nosedive… right into an open trashcan.

So of course I rush over there to check it out, but the raven was just gone out of nowhere. I was not the only pne who saw it though, another kid came rushing over as well, and thats how i met my best friend for the next 4 years.”

“A friend once called the wrong number, got the wrong house, and had the right person pick up.

So, I was at work, replacing a modem for my boss. I’d removed the modem and connected a telephone to test that it had dial-tone.

Soon after, the phone rang. It didn’t make much sense, because that phone line had only been used for outgoing calls from the computer.

When I picked up, the person on the other line just said ‘Hey man, you want to see a movie later?’. I recognized the voice, too. It was a friend of mine. I was really confused for a second and said something like ‘Josh? How did you get this number?’. He said he called my home phone number.

He must have misdialed my number, and accidentally dialed the number for my bosses modem line, at work.

He called the wrong number, got the wrong house, and the right person picked up, on a phone that had only been connected for 2 minutes in the past 2 years. The odds must be astronomical.

“Before my husband and I were married, but had been dating for a long while, I was watching Portlandia and BAM, there’s my husband on screen.

Dumbfounded, I called him.

He said, “oh yeah I forgot about that”.”

“Got stuck in a bank for the night. When the bank is closed, you can still get to the ATM thanks to a security door.

Once inside the door decided to stop working. No phone, no emergency button. Just waited here for hours till someone in the street saw me trough the glass and called someone.”

“I went to see Mitch Hedberg do stand up.

We stayed around awhile hoping to see him leaving. He never materialized though, so my husband and I walked towards our car. As we were walking we heard a woman yell from an ally “Hey! Mitch Hedberg is back here signing autographs!” We walked around the corner behind a scary old building.

It was like 1 am and pretty dark. There was Mitch Hedberg and no other fans. Just him and his wife, who had been the one to yell about autographs. He was very high and super lovey. He hugged my husband and me and told us what his fans mean to him. HE took pictures of US for his scrapbook page online.

He was also hilarious. We were just there behind a building at 1am with Mitch Hedberg and his wife laughing and hugging deep into the wee hours… When I tell people this they go silent and I’m not sure why. I figure they don’t believe it.”

“I was the brokest I have ever been living in the middle of nowhere. I was pulling my last 20 dollars out of a gas station ATM.

I hit the button and it spit out 60 dollars. I was only charged 20 on my account. It sounds like such a tall tale but I swear it happened.”

“Back in middle school I was walking back to class after lunch when someone chucked something down the hallway as hard as they could.

My natural instinct was to jump up and catch it. It was a perfect catch and not a single person saw. It was a mozzarella stick.”

“I got high with Bob Dylan in the ’90s. I was walking around after the show and saw his tour bus and he was outside of it.

He was a really good guy and it was an honor. He wouldn’t s**ke mine but he offered some and we shared his.”

“I once called cold-called friend I hadn’t heard from in 10 years. It was busy.

I called again a few seconds later. His first words to me “I just called you! It was busy.”

We had not spoken in years and yet cold called each other within the same ~10 seconds. It wasn’t for any particular reason either. Just pure coincidence.”

Tell us a funny memory in the comments.