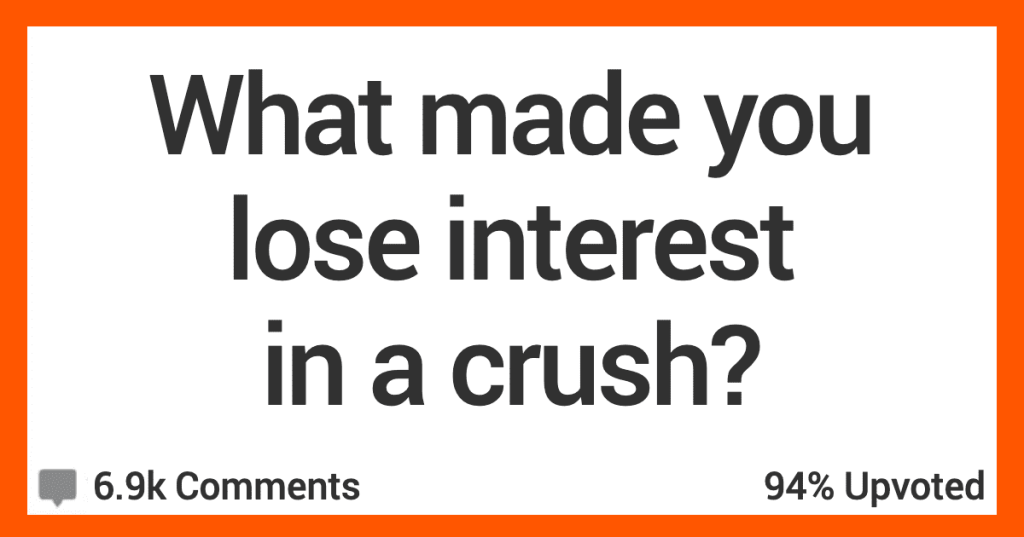 It’s always a bummer when you have a crush on someone…and then it goes off the rails and you realize you’re just not into them anymore.

Let’s see what made AskReddit users immediately lose interest in their crushes.

“She slapped me while I was driving through a busy intersection because she thought I laughed at her while she was singing.

““I dump people to feel something.”

“When I realized she had to take her bestie literally everywhere.

We are still friends on Facebook. My old crush is married now and I see all these pictures of her and her husband in Greece, Paris, Safaris in Africa, and you guessed it, the 3rd wheel is in all the pictures.”

“Guy still flirted with other girls after expressing interest in me and let them sit on his lap. I ended it before it even really began.

A year later he asked if I wanted to fool around. I said no. About a month after that I saw he had a girlfriend when she tagged him in a FB post saying “happy 6 month anniversary.””

“We had maybe 3 dates and were fooling around after on the bed, and she says it’s too soon we should wait.

And I said alright if that’s what you want that’s no problem at all.Tthen she sighed and said “a real man takes what he wants”. I showed her the door after explaining that a real man respects a woman’s boundaries and that we won’t be doing this again.

In this day and age a real man does absolutely not “take what he wants” goes double when you are just beginning to date and don’t know each other that well.”

“I actually hung out with her one night. She was fine, nice and everything, but I just wasn’t interested after that.

Sometimes that’s really just it. You think you’re interested, but on further reflection you’re not.”

“Saw them just throw their fast food trash into the bushes at a park.

“After talking for weeks, he admitted to sleeping with my younger sister.

Immediately lost interest. He was confused as to why I called it off, despite me explaining why.”

“She cheated on her BF on an international trip.

He was a cool dude, felt bad for him on that one.

I haven’t spoken to her in years.”

“She was sh**ty to waitstaff.

Expected a hostess to pull a table out of her a** to seat us.

“She believed she could transfer between dimensions and that she was apparently the queen of one.

I tried their method, but it just didn’t work. Her friends believed it too.”

“I went on a first date with a girl I’d say was out of my league to dinner.

She was negative the whole time about our server even though everything was great. Paid the bill and my date just looked at me oddly. “You don’t have to do that you know.” So I’m just like “Uh, do what?”

“Tip, take your money back. You’re not* leaving her anything extra” Like bruh, I’ve worked in restaurants my whole life, our service was great, and I’m the one paying, how are you going to be rude and on top of that tell me I’m not allowed to tip our server; p**s off.”