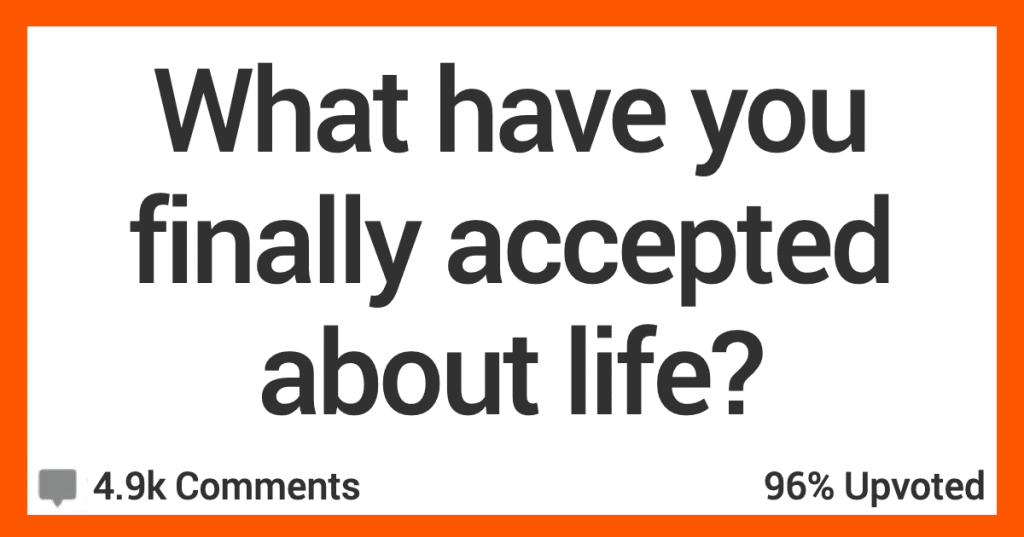 Life is tough and there are certain realities that you have to accept about it.

Chances are good that you’re not going to be famous, or rich, or a great athlete…

So it’s better to just get on with life and focus on the things you can be good at!

But still, it can be hard to come to grips with some things…

What have you finally accepted about life?

Everyone can be telling the truth and have a different story about the same event, especially because of how fallible memory is and how we tend to skew our view of events based on our biases and preconceptions and other factors like being inclined to favour ourselves and disfavour people we dislike, as well of course because people only know their own mind and not other people’s.

They very rarely do. Usually someone’s version of events is more skewed and more inaccurate than others, if not in terms of memory then in terms of how it relates to the law.”

“Never expect anything from others unless you have a signed agreement with them (and even then they can break it).

Doing good things to others doesn’t make them owe you anything, and half of the time the people that don’t do the same to you are not just bad, they might simply forget about it or don’t notice.”

“Not everyone is my friend.

“That I don’t have to justify my decisions to people.

If it makes me happy and has a purpose for my life that’s good enough for me.”

I started going bald at 23. I had at least some hair for a long while but finally decided I’d look better bald than trying to make it look like I’m not.

“That life is unfair and you just have to continue having the will to live and make the most out of what you’ve got.’

“Suppressing my anger was not a good idea.

If you’re angry it might be for a reason and you should explore it.”

8. Listen to the Captain.

“Captain Jean-Luc Picard : “It is possible to commit no mistakes and still lose. That is not a weakness. That is life.””

“Work is what you do for money.

Time is what you spend.”

“I think one of the hardest things for the average teenager to get over is that the vast majority of friends you have in school will no longer play a role in your life as an adult, but that’s not always a bad thing either.

I say though that, no matter your age, enjoy the good things in life while they’re happening because everything changes at one point or another.”

“That I can’t make people love me.

Doesn’t matter how much I love someone if they don’t love me back.”

“There will always be someone that doesn’t like you, no matter what, even if you do everything right, they’ll always think you did it wrong.

So don’t try to please everyone and relax.”

What’s your story about this?