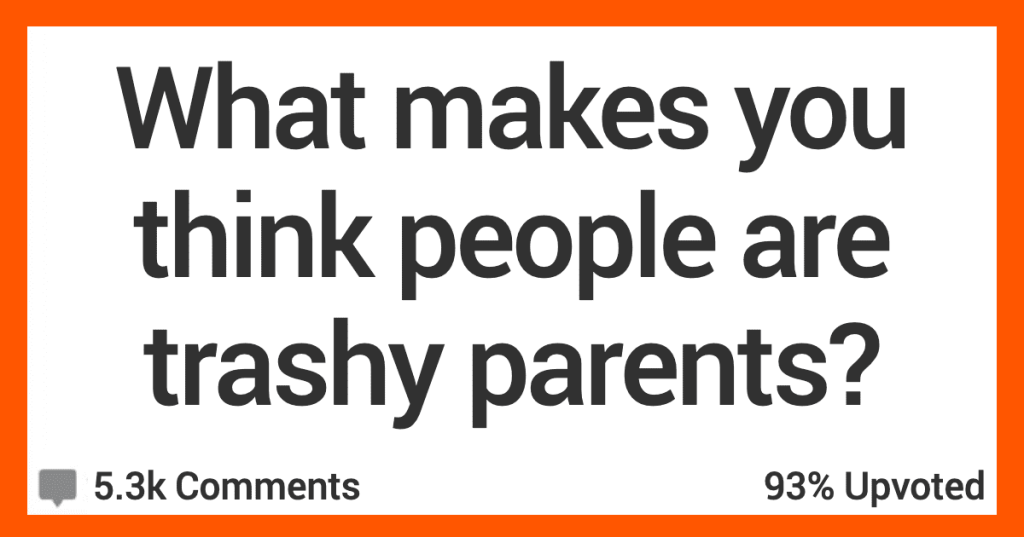 Hey, you don’t get to choose your parents, you know what I’m saying?

And, as we all know, we’re all products of our environment.

So let’s get trashy and see what AskReddit users had to say about this.

“Mothers who sees their daughter as competition.

And mothers who see their son’s girlfriends as competition.”

“Social media influencers whose entire content is their children.

People who publicly punish their kids online, parents who give out way to many details about their children giving them lack of privacy.

Child exploitation at its finest.”

“Cussing out the officials at a little league game.

Telling your child to punch another player they tripped over.”

“When I waited tables in college, I saw a mother fill her young toddler’s bottle with Coca-Cola.

I thought it was just horrible.”

“When their kids could literally set the world on fire and they’ll blame anyone else to avoid responsibility.”

“I lost count of how many parent conferences I had that went like this:

Me: You child’s grades and behavior are horrible.

Them: I don’t know what to do! I’ve tried everything!

Them: I took their PS5 away, and their XBOX360, but then they went crazy, so I gave it back to them.

“Changing your kid’s diaper in a Walmart parking lot and throwing the diaper full of s**t on the ground for someone else to deal with.”

“Kids that smell like s**ke because their parents s**ke indoors.

It was my parents.

Everybody h**ed when we came over because everything we’d touch would smell like ci**rettes as well.

Couldn’t convince my parents to s**ke outside of the home because “it’s their house and they’ll do as they please”.”

9. Mommy needs a night out.

“When the kids are sick and contagious, but the parent(s) want a night out, and don’t tell their childcare provider their kids are sick.”

“Young children whose teeth are already black and rotting from lack of care.

Children in dirty/smelly clothes – not from a child playing outside as kids do, but legitimately filthy, unwashed, clothes.”

In their yard, in their house. Just junk and crap with no purpose or reason. I watched out my window as thier kids treat their things exaclly the same way. Bikes left in the street and toys left out to rot on the side walk.

For example the kids figured out how to get one of the eight lawn mowers moving and the first thing they did was pull a sled behind it as fast as it would go. It was June in Wisconsin and they still had sleds laying around. It’s never dull on my street but sometime I think that would be nice.”

“Mom wearing Cookie Monster pajama pants walking out of a Shell station at 9:30 at night with two kids while throwing her black and mild cigar wrapper on the ground.

The son has a chapped upper lip you could light a match off of it and the daughter looks like she spent her last evening trying to cut her own hair.”