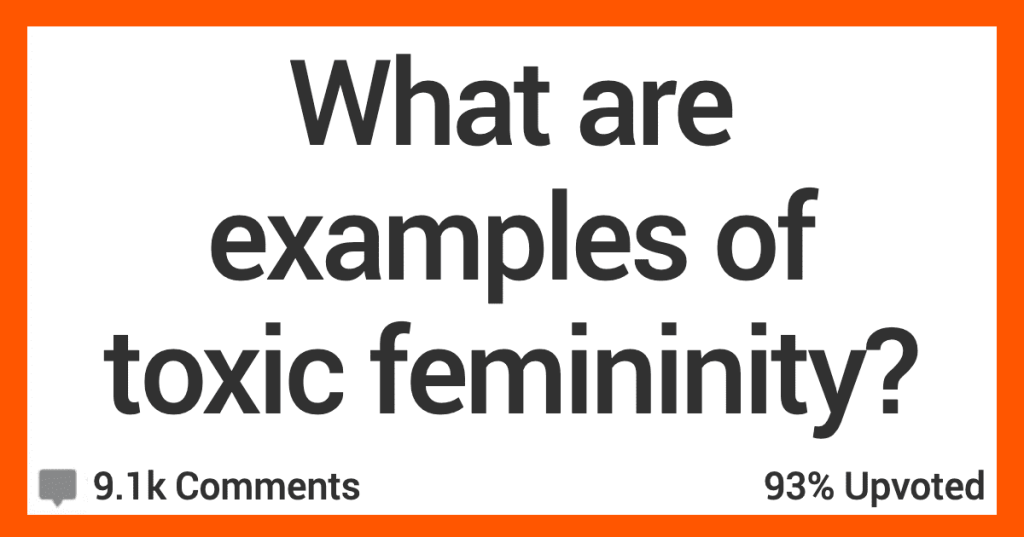 We hear a whole lot these days about toxic masculinity, but today we’re going to flip the script and hear from folks on AskReddit about what they think are examples of toxic femininity.

And I think we can all learn from their responses.

Take a look at what they had to say about this important issue.

As a new mom, I used to read blogs for support and to try to meet and interact with other new moms.

“Being overly suspicious of every man.

I worked at a daycare center/ elementary school for a few years. We would take the kids to the park during the warmer months to play and have fun. When it was the other female counselors and teachers nothing would ever happen.

When I was one of the counselors, the police were called about a suspicious man hanging around the kids at the park. Ignoring the bright red shirt that had the schools name, logo, and counselor written in huge letters across the back.”

“Mothers shaming C-Section moms saying they didn’t give birth because the child was surgically removed.”

“That breastfeeding is the only way a good mom would feed her baby.

My sister bled her nipples dry trying to produce milk.

She had all this internalized guilt that if she couldn’t breastfeed then she wouldn’t be a proper mother and it would be her fault that the baby was malnourished.”

“Putting women down for their interests.

And putting other women down, period.

Some girls out there purposely looking out for rivals and “enemies.””

“Being verbally ab**ive and then playing victim the second the other person argues back or raises their voice.”

“I semi-dated a woman in college who at one point made the statement of “I wish I could find a guy who is mature enough to put up with my issues.”

I wanted to point out that it wasn’t a maturity/immaturity issue that was the problem. In fact I find most mature guys know to run away from a woman with as many red flags as she had.”

“Mothers telling women without kids that their life is meaningless and they can’t understand true love.”

“Women who throw other women under the bus for a man, or the attention of a man etc.

Plus it’s usually for someone who is to some extent or another, a scumbag.

I’ve never seen one woman burn another woman for the sake of anyone worthwhile.”

“That single women should be sad.

If you can’t live with yourself and be happy single then why the hell would you expect somebody else to put up with you.

Too many relationships explode because one or both people are dumb enough to expect another person to compensate for issues that they can’t even sort out on their own.”

“Women that only want traditional values when it benefits them.

My mom does this. She’s a “strong independent woman” until she’s in a relationship.

Then suddenly he needs to pay for all her bills, buy her things (one-sidedly), and commit to every male gender role.”

“I am a Male in a predominantly female professional environment. I cannot tell you how many times a female peer has stated they’re so happy I’m a guy and that we need more men in management to offset the “cattiness ” of the office.

I cannot tell you how many times I’ve overheard women bashing one another in the office either. Hair, makeup, boyfriends, clothing choices, diets, body types … it goes on and on.”

Do you have anything to add to this conversation?