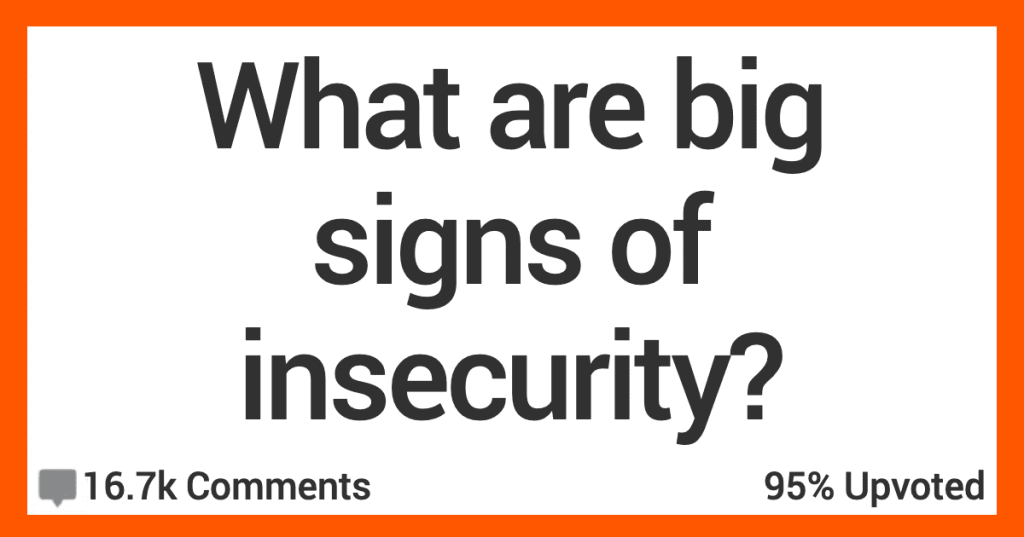 13 People Share What They Think Are Big Signs of Insecurity

There are just certain things that stick out about people that just scream INSECURITY, you know what I’m saying?

And instead of listing off the things I think fall into that category, we’re going to hear from AskReddit users about this.

“When you achieve something or improve your life in any way, and their first instinct is to tease or make fun of you, it actually screams instant jealousy.”

“Always having something negative to say when something good happens to someone else.

For example “oh you’re going to h**e that new job” or “they should have done x instead”.

Just be happy that someone else is happy!!”

Some people will twist the story, change the way it happened and retell it so convincingly that they’ll believe their own nonsense but will never apologize.”

“When they found a point that makes them look better than the other person and continue to overstay on that point.”

6. Funny how that works.

“Used to have a friend that was really fixated on badmouthing a specific girl.

With time I realized that everything my friend h**ed about this other girl were things she actually did aswell, so she was just insecure about her own flaws and projecting.

“Taking a situation that was never about you or had you involved in it and somehow making it all about yourself and playing victim(even tho you had meddle in it and make yourself the” victim “).”

“Ridiculing other people’s suffering; usually by trying to top it or dismiss it.

Like, can we just listen to people when they’re having a hard time?”

“I have an employee. He ribs people and talks s**t all day long.

The instant someone fires a shot back it’s the end of the world. 48 year old cry baby.”

“Back in my single days, a lot of guys who came up to me in bars and clubs and such would insult their friend to me, as if that would make me interested in the insulter.

One of my coworkers trashes everyone we work with, and finally one day I asked him what he called me when he was discussing me with others.”

“”I felt so ill I was off work for 2 days and stayed in bed the whole time”.

“In terms of leadership, it’s when someone can’t (or won’t) take input from the rest of their team and tries to act like they have all the answers.

I was this type of insecure leader once and I thought that if I used the idea of someone with less experience then everyone would think I was a weak leader. But after I was removed from that position I had to work for a lot of managers who did a lot of the same stupid shit that I was doing but magnified due to years of insecurity/habit/karma.

I have since learned that if I hear people out, discuss a course of action, go with other people’s ideas, and especially give them credit you gain exponentially more influence and respect.

What do you think are signs of insecurity?