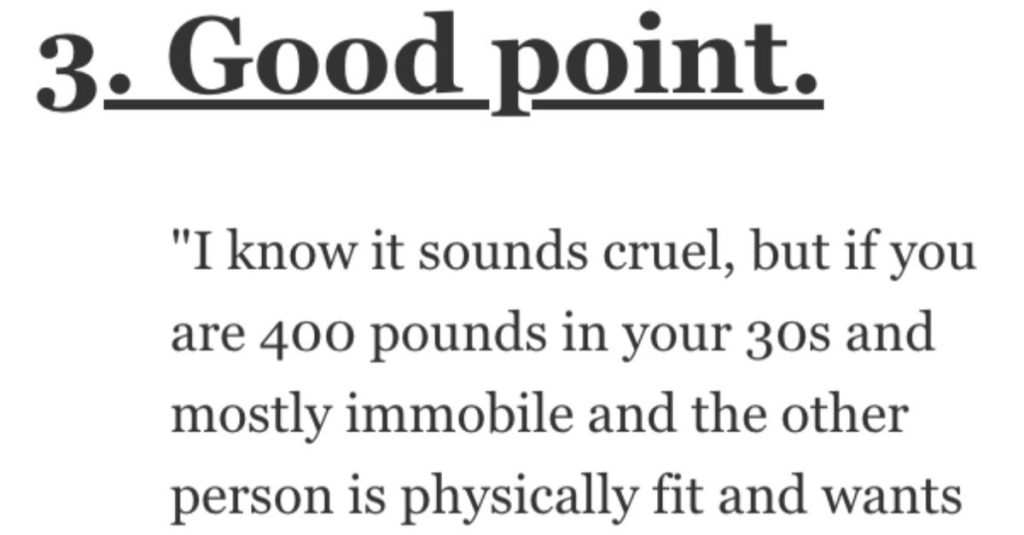 I guess it all depends on the situation, but this kind of request seems like it could really go sideways, don’t you think?

“My girl told me to lose some weight. But in my case I believe she had the right of it. Getting older. She told me she doesn’t want to build a life to have me d** because of something I have complete control over.

I think there are legitimate reason for someone to have that as a condition to spend their lives together. But if their reasons are “no fatties” then run away. They don’t care about you.”

“I think the reason they want this really matters.

I had a morbidly obese mom who most likely d**d from being obese. It was very hard on her and me. I grew up with her crying about being overweight and the pain she was in. It got to the point where she first had to use a walker and then wheelchair. She had a lap band surgery but managed to stay obese.

I’m currently obese myself and have health problems related to it. I’m working on losing weight and have lost 50lbs so far. I plan to lose more before considering dating again.

Considering how hard it was for me with losing my mom and all her suffering, I really don’t want to date someone who isn’t at a healthy weight or at least working on losing weight. I wouldn’t fault someone feeling the same about me.”

“I know it sounds cruel, but if you are 400 pounds in your 30s and mostly immobile and the other  person is physically fit and wants to go out and go on walks/jogs or go camping or do other things with her partner but he can’t because of his weight… add on top of that the fact that it would greatly hinder their s** life… that would be incredibly difficult to want to stay married.”

“I’m foreign. If I ever gained weight my entire family would just be very blunt about it. In a non mean way. Just, it is what it is. And if I don’t like it. Well then stop whining and eat less.

Anyway, If I thought I was an appropriate weight and my SO demanded an even better physique… Maybe, but I’m getting something out of this deal. Probably s** stuff. And snacks.

If you demand a king, I’m going to demand a queen.”

“Depends on the context.

Is it “I don’t find you attractive so lose weight for me to be interested.”? If so, leave.

But truth be told I wouldn’t be mad had she wanted me to lose weight before the wedding.”

It’s like saying “I’ll marry you if you stop s**king/drinking” because you want your partner to be around to see your children grow up.

Seems perfectly reasonable to me.”

“I would lose the weight….

“If they word it in a way that they simply only want to be with me if my appearance changes, I’ll tell them to f**k off.

But if they’re worried about my health and my weight is a part of that, then I’ll be a little more understanding.”

She got a dog to take walks with, but now I walk the dog 3x a day.

I make healthy breakfasts/dinners. She gets fast food lunch everyday. Can’t seem to get her to go to the gym with me. She won’t go on walks. I’m careful to never say anything weight related because she’ll get depressed. She does want to lose it.

Idk what to do. Love her, but being way overweight at 26 is just a lifelong uphill battle I don’t want to deal with. She’s gained 70+ lbs since college (mostly while we weren’t together/ long distance relationship).

“If I was super obese and my partner was trying to push me to be better then take it to heart and work on yourself.

If I’m not obese and they are just doing it to attack me then tell them to f**k off. I’d hope if someone actually cares about me and I let myself go that they would call me out on it. Being obese is nothing to glorify.

A lot of comments are trying to justify in sickness and in health and that they would leave just because the ultimatum but as a comparison, if your partner was a non abusive alcoholic and wanted to get married would you ask them to quit drinking before you marry them?

Would you be offended if you partner asked you to quit drinking if you wanted to get married? Both are self destructive tendencies. I sure as hell would not be marrying a heavy alcoholic or someone obese but if I love that person I’d speak my mind and give them the opportunity to change.”

What would you do if this happened to you?