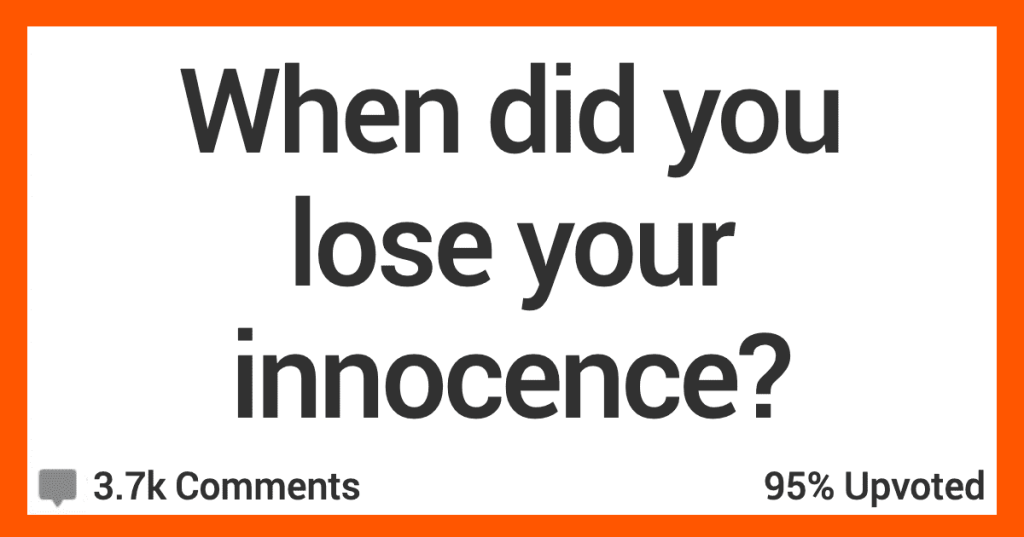 12 People Share Stories About When They Lost Their Innocence

I love coming-of-age books and movies.

And part of the reason why is because we can all relate to that time in our lives when we lost our innocence.

It’s a universal experience no matter who you are or where you come from.

And today we’re going to hear from people on AskReddit about when this happened to them.

“I went to a class after spending time with two friends. There were at that class too and they sat in front of my, although they didn’t know I was sitting right behind them.

They just talked so much s**t about me and I could hear all of it. That day I realized that you might think you trust someone but it doesn’t really mean that you should. People act like they like you but that’s not always true”

“When my uncle tried to throw my mother off the balcony (three stories up) when I was 7 in front of my two brothers, my cousin, and I after them fighting about something really stupid.

The next day my mother was arrested for driving her car through a guard shack to a gated community where my father lived (with me in the car). Never been the same since those two days.”

“When I was 10yrs old. My baby sister d**d suddenly and I woke up to my parents screams.

I watched my dad cry. I thought he was so tough and couldn’t cry. I remember holding my baby sister before the corner came. I realized then that life isn’t a guarantee and that you can lose someone you love in a blink of an eye.

I developed anxiety, an unhealthy people pleasing defense mechanism. I became superstitious and believe that one mistake could cause the d**th of all my loved ones. I struggle with this every day. Sadly, that was just to start to the loss of my innocence and childhood.”

“When I saw my mom fall and have a seizure and I thought she was d**d and didn’t know to call 911 or my dad first cause I knew we were poor and another medical bill would add on to our debt.

But if I did call my Dad first I was scared he’d be mad at me for wasting time and not calling 911 either, so I just stood there a few seconds looking at what I thought was my d**d mom not knowing what to do.

She didn’t d** til years later, but I think that was what made me truly understand anything could happen anytime and it’s out of your control and also adults’ control too.”

S**ual a**se, emotional a**se. Dad walked out and didn’t care about us at all. A classmate committing s**cide by hanging himself. An uncle in and out of our lives because of drugs.

As a kid I thought I was better prepared to face the world than my peers but as an adult I realize how traumatic it all was.”

“When I was 8. My best friend wasn’t paying attention as we walked along a rural road and stepped in front of a log truck.

She amazingly survived but lost one leg and was paralyzed from the chest down, plus had some residual cognitive deficits.

My world was pretty idyllic in our small mountain town up until that point. I still remember it down to the nanosecond.”

“When my dad d**d, me and my brother watched him get carried out of the house on a stretcher.

We prayed for him to be ok, but it was cancer and he had been deteriorating for a while.

Never even got to say goodbye.”

“My brother, 2 years younger, would often get beat up by an older kid while walking home from school.

He was in elementary (grade 5) and I was in a different school, a middle school (grade 7). We often moved from city to city due to my father’s job so we’d always be the targets of ridicule, teasing and sometimes receive physical blows. My mother insisted we don’t fight back so we just took it. We were very passive and accepted our lumps.

One day I came home to see my brother crying hard and he showed me the bruises and the cut lip that the usual bully had given him. My mother had previously met with the school principal and even spoke to the kid’s mother but nothing changed.

This kid would regularly beat on my brother but on this day I got very upset. I snapped. The next day I got out of school early and I waited by a wall near this guy’s house. When he turned the corner I grabbed him as hard as I could and slammed him into the wall.

I never told my mother or my brother what happened because I was afraid of getting in trouble.”

“When I was about nine or so.

Mom started sneaking into my bed at night and feeling me up. I would just lay there and play sleep because I just didn’t know what would happen if she knew I was awake. But of course, she knew. It was kind of a sick game for her.

There are two kinds of m**estation: the kind when the a**ser inflicts physical pain and the kind where the abuser inflicts pleasure. Mine was the latter. I had all kinds of guilt and for years and I’m still icky about s**.”

“It was winter when I was 11 walking down in my neighborhood in Kandahar, Afghanistan with my friends, all of us set to play cricket.

We saw 5 talibs who executed a Hazara teen girl for maybe stealing or p**stitution. She was shot straight in her head and her brains splattered all over the pavement.

I remember the Talibs made jokes about how her splattered head reminded them of an Iranian goat brains delicacy. From then on I realised that life isn’t pretty mellow.”

“I was six years old and I was being carried by a police officer to a waiting ambulance in the middle of the night.

I remember arguing with the officer that I was a big girl and could walk myself. My mother was mentally ill and decided to end it with pills, but couldn’t bear to leave this mortal plane without her children, and fed us her pills. My father found out before we were seriously injured.

My hard-working, factory-worker father had to fight the government for our custody, and actually had spirited us to another state for awhile to avoid us being placed in foster care. He later had to fight again in court, when my mother was released from the hospital and sued for custody. These legal expenses left us in poverty.

While my father was great at explaining that it was not a lack of love on my mother’s part, but rather too much love, I learned at that age that children were often helpless flotsam in the swirling vortex of the turbulent adult world.”

“The first time I was on a military deployment and I shot somebody d**d.

It wasn’t in that moment, because what I did was purely a mechanical function that I viewed in a mental flowchart furthering accomplishing the goal of the day.

I kept fighting and fighting, and eventually after the whole mission was done, I made it back to base, and I went and played video games (Metal Gear Solid 3).