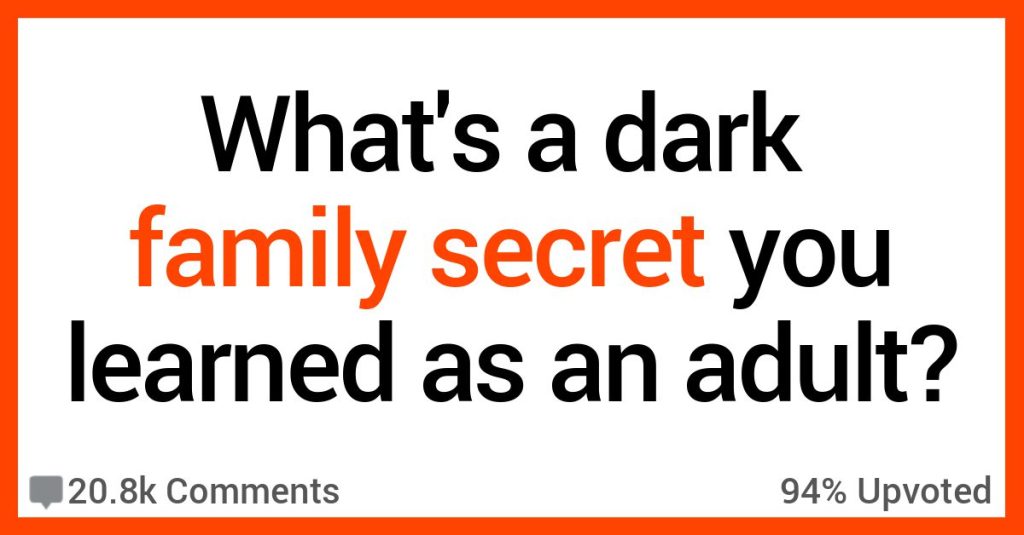 I’ve learned a few things about my family as I’ve gotten older, but nothing too crazy or scandalous.

But I think we all know that a lot of families out there are harboring BIG secrets that were kept hidden from certain folks for their own good.

People took to AskReddit to talk about the family secrets they learned when they were old enough to hear them.

“Great uncle was taken from his parents, told he was retarded, wouldn’t be right, put in state hospitals, experimented upon, only thing wrong with him was a speech impediment…”

“When I was about 10 my cousin and his dad d**d. I always thought it was an accident and on the same day.

When I was old enough I was told that his dad actually committed s**cide and my cousin followed him couple months later.

They invited my mum, who refused and was pretty horrified.

My dad (their brother) had zero idea.”

“My uncle (my father’s brother) used to hit my aunt and when my mother found out, in the middle of a wedding party, she went straight to beat his a**. People had to break up the fight.

I found out because my parents were talking about it as if it were nothing. I was mortified. If I had known what a piece of s**t my uncle was, I would have never treated him well, like I did all my life.

“I was in senior year of high school when I was told about the family tragedy by my grandparents. My grandfathers brother m**dered his wife.

She was trying to divorce him and he snapped. He went to jail and their son (my dads cousin) was alone. He was in middle/high school. My grandparents convinced the deceased mother’s side of the family to let them finish raising him and were able to get him back on a good path after the trauma he suffered.

He has grown up into an absolutely wonderful man with a wonderful family and I love him.”

“My father cheated on my mum with my sister and I’s horse riding instructor. We’d always thought it ended amicably.

We only found this out while mum was admitting to having contemplated driving off the road with us in the car as kids, as opposed to raising us as a single mum with no career or stable job.”

“The reason I had a “live-in baby sitter” when I was 5 that moved in at 2 am was because my mom’s cousin k**led 2 kids and we ended up harboring his daughter during the trial.

He’s the only person on D**th Row in my county.”

“My Uncle was r**ed as a young boy and my grandparents not only didn’t believe him, but beat him and disowned him for “bringing such lies into our house”.

Sad thing is, I was r**ed as a kid and while dealing with that my Dad told me what hapoened to my Uncle (I assume so I didn’t feel so alone).

My Uncle is still the only one I know personally who has experienced the same trauma as me, and I’m not meant to know so can’t talk to him about it.”

“That my favorite cousin wasn’t missing.

All I knew growing up (he was 13 years older than me) was that he would come and go alot. He lived with us when I was a baby and after he moved out he would visit every 6 months or so out of the blue, but we never visited him or called him.

His visits were one of my favorite things in the world. I loved him like a brother.

By the time I was a teenager I did understand that he had issues with his parents.. they had kicked him out at 13 and my parents took him in.. but that kind of childhood messes with you. In between visits to my parents he avoided the rest of the family, moved alot, and didn’t hold jobs for long, which is why my parents didn’t always know where he was.

But in my later teens he stopped coming over at all. I asked repeatedly if anyone had heard from him and I was told no.. I asked about contacting him and was told no one had a number or address for him.. he would come around when he felt like it.. But it stretched on for years. I really worried he was d**d, and I really missed him.

In my later 20s I finally found out that everyone knew where he was the whole time. He was in prison for m**der 🙁 From what I hear it was actually somewhat justified. He was defending his new wife, who I never got to meet.

I also found out some super s**tty things about how the extended family sided with his f**ked up parents and refused to help him or his wife when he got arrested .. and that they shamed my dad into not helping either.

I tried to send a message to him in prison but I don’t know of he ever got it. I wish he knew that I didn’t turn my back on him for decades like everyone else did.. I just didn’t know.”

“My grandfather m**ested his children when they were young, my aunts and uncle didn’t speak about it til they reached their 20’s and 30’s.

They hid their experience to their siblings but little did they know, they all experienced the same thing.

They all suffered trauma but didn’t tell my grandmother about it because she loves our grandfather very much.”

“To put it shortly – my family tree, is more like a very long branch.

Yes we have the genetic defects to prove it.”

“There was a big fight with my uncle and another family which often broke into a fight. This was when I was about 10.

Never understood what was going on and the scenes always left me shaken. Turns out my 40 year old uncle got a 16 year old pregnant that was working for him.

My other uncle told me when I was much older.”

What are your family secrets?