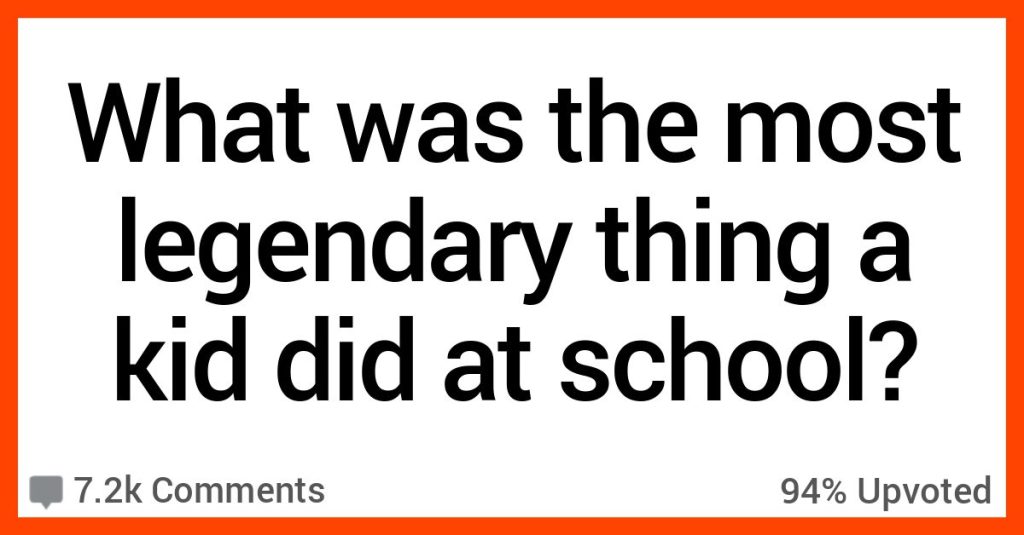 Every school has kids who earn legendary status among their peers.

For me, it was when a kid on my bus Freshman year of high school talked back to the terrifying bus driver and put him in his place.

This kid had some balls! And he then was king of the neighborhood…

People on AskReddit talked about the most legendary things that kids did at their schools.

“We had a kid do pull the fire alarm when our state’s Supreme Court was doing a presentation or visiting or something. The staff was FURIOUS, everyone knew he did it, and they tried to prove it was him, saw LEOs dusting the handle for prints.

There was an old rumor that when you pulled the handle it sprays like an invisible ink visible to black light on your hand, idk if that’s true, but I know the kid used his shirt sleeve to cover his hand when he pulled it, so there weren’t any prints.”

“Created a fake student that was elected Homecoming king. This was not discovered by the faculty for 3 months.

I could not remember the fake student name but pinged an old classmate. It was Elmo Dudley.

Dumb teachers. Made the local news. What a riot…”

“My best friend owned a red 1975 Corvette Stingray. That thing was like his baby.

It was an awesome car but he never shut up about it and always did burnouts in the parking lot. For senior prank day me and a couple of friends went to his house the night before, got his keys, drove his Corvette to the school, and with the help of a coach that liked us, parked his car in the center of the gym.

Since he was staying at his dads house that day, he didn’t notice until he got to school and the SRO asked him why the hell his car was in the gym.

I’ve never seen someone more confused in my entire life. S**t was priceless.”

“At night, he took down the flag on the illuminated flagpole (several spotlights on it) and replaced it by hoisting his Jolly Roger flag up the pole for all to see upon arrival in the morning.”

“During our SATs, heard wheels coming down the hallway.

Look up to see out the window by the classroom door and a kid from the grade below me was riding a skateboard down the hallway with a b**g in hand, s**king it.”

“A guy I was friends with hid 26 iceberg lettuces around the school.

As far as he was aware only 9 were found. Places included urinals, lockers, behind books on shelves, balanced on bannisters and behind lights.

It became a full scale witch hunt for these lettuces.”

7. His parents were proud.

“It was my Senior prom and my class’s valedictorian, a dude named Tyler, had vanished for a prolonged period of time.

Just as people were noticing and asking if anyone had seen him, he reappears in a skin tight SpiderMan costume on stage with the band and starts breakdancing and pelvic thrusting on stage.”

“Cut off his thumb in wood shop.

And they couldn’t find the thumb. It surfaced weeks later in the shop.

Months later I found myself sitting next to the wood shop instructor at dinner on a field trip and got to hear the entire saga in full gory detail. While trying to eat dinner.”

“In high school, two Seniors who had been buds forever got into a fight in the hallway in between class periods.

What makes it legendary is that they first met in Tae Kwon Do class ……when they were in kindergarten. Movies just show the performative aspect of martial arts. This was just……they were doing flying kicks at each other.

It was so brutal. The teachers didn’t dare to break them up. They only stopped because they got tired from beating each other senseless.”

“I don’t think the person who did it was ever caught, but during my junior year of high school, someone snuck in chickens.

So there were a couple dozen chickens just roaming the halls and all the teachers were panicking. For some reason, the faculty treated them like rabid dogs.

There’s nothing funnier than seeing literal road blocks set up around a chicken and 4 teachers all red-faced and pulling their own hair.”

“We had an English teacher in training with poor classroom management skills. She understood little of what was going on in front of her.

He told the teacher that he had gone to the bathroom. She nodded and just kept on with her lesson.”

“For senior prank a group of kids dressed up in all black with masks. They ran down the main hall of the school with industrial buckets of cheap vegetable oil pouring it everywhere.

I mean everywhere right before the bell rang for passing period. Kids were slipping and falling all over the place spreading the oil even further throughout the school. It was so bad they ended up sending everyone home so they could clean up the mess. The school did a investigation pulling camera footage from campus and interviewing students.

Of course the kids were bragging to friends about their accomplishment so the suspects were pulled into the office. They didn’t even need to interrogate them, they knew they all did it. How? They were all wearing the exact same shoes when they pulled it off.

They were suspended for 5 days, school was pretty cool with the whole thing.”

Did you have anything totally epic happen at your high school?