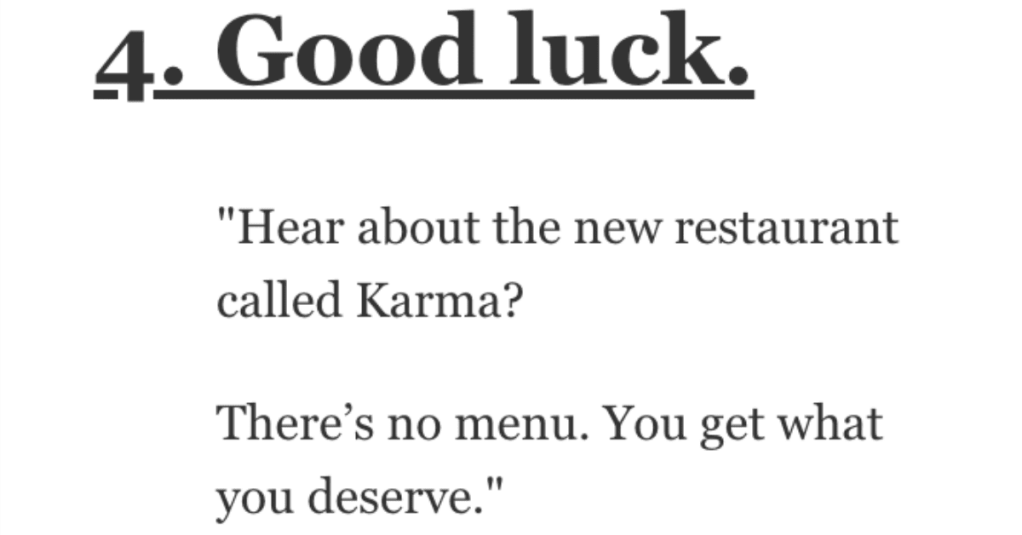 30 People Shared Funny Jokes That Anyone Can Remember

In fact, we believe that humor is one of the best parts about life!

I mean, think about it, what would life be without humor?

AskReddit users shared short jokes that all of us should be able to remember.

“Helvetica and Times New Roman walk into a bar.

“Get out of here!” shouts the bartender.

“Don’t worry,” said the doc. “Those are just contractions.””

You get what you deserve.”

“Why the big pause?” asks the bartender.

The bear shrugged. “I’m not sure; I was born with them.””

“Did you hear about the actor who fell through the floorboards?

He was just going through a stage.”

“Did you hear about the claustrophobic astronaut?

He just needed a little space.”

Because they make up everything.”

“Why did the chicken go to the séance?

To get to the other side.”

“Where are average things manufactured?

“How do you drown a hipster?

Throw him in the mainstream.”

“What sits at the bottom of the sea and twitches?

“What does a nosy pepper do?

“How does Moses make tea?

“Why can’t you explain puns to kleptomaniacs?

“How do you keep a bagel from getting away?

“A man tells his doctor, “Doc, help me. I’m addicted to Twitter!”

“What kind of exercise do lazy people do?

Because you should never drink and derive.”

“What do you call a parade of rabbits hopping backwards?

“What does Charles Dickens keep in his spice rack?

“What’s the different between a cat and a comma?

“Why should the number 288 never be mentioned?

“What did the Tin Man say when he got run over by a steamroller?

“What did the bald man exclaim when he received a comb for a present?

Thanks— I’ll never part with it!”

“What did the Buddhist say to the hot dog vendor?

Make me one with everything.”

“What did the left eye say to the right eye?

Between you and me, something smells.”

“What do you call a fake noodle?

“How do you make a tissue dance?

Put a little boogie in it.”