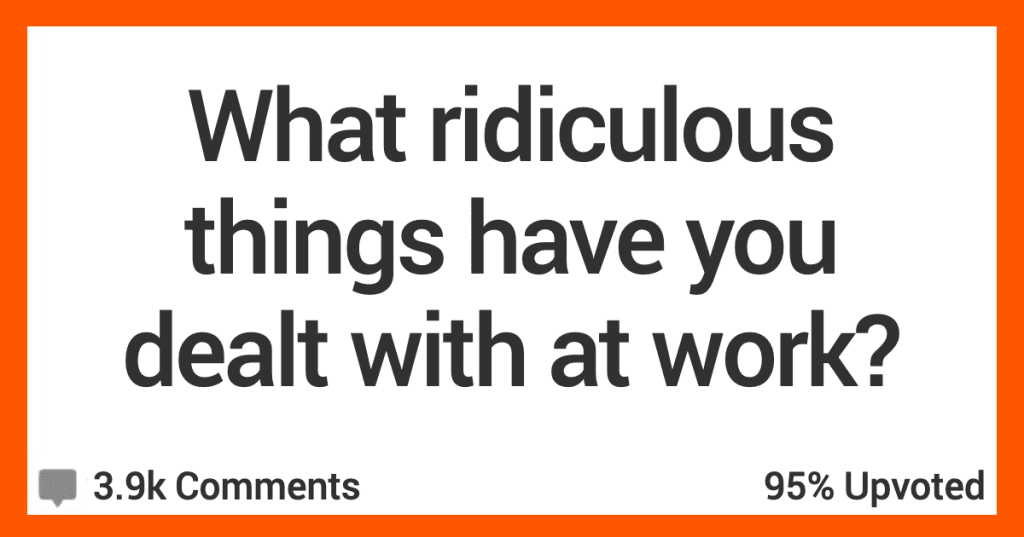 When you get a little bit up there in years and you finally get a job that you enjoy, you look back on all the bulls**t you dealt with when you were younger at work…

Well, at least that’s what I do…

And that’s a good thing because it means you can finally laugh about the ridiculousness and that you’re in a good spot!

Let’s hear from AskReddit users about the most ridiculous things they ever had to deal with at work.

The lady had changed her first and last name a week ago. Had changed her email as well. I ended up having her former name on an attendance sheet from a few weeks ago but man is it hard to help people sometimes.”

“I work in IT, and literally any interaction involves people making it hard to help them.

Okay…wanna expand on that a bit? When did X work last? What are you trying to accomplish with X? What is the expected outcome, and what is the actual outcome? Error messages?

“When I worked in a medical office, someone paid out of pocket for their child. They brought their second kid in and I asked if they had any insurance. They had the equivalent of $4,800 covered.

They asked if their first child had the same policy. They got mad when I told them yes, they were eligible but that was 6 years ago. I looked at their intake paperwork, they wrote NO on the insurance line.

It was a whole deal, they were mad that I didn’t run their info through every insurance company just to make sure they didn’t have some coverage.”

“Intern once thought that he could fax a physical object to the receiving machine.

He was trying to fax his belt to a friend.

Kid was either an acting prodigy or maybe he needed a life jacket to eat soup. I guess I’ll never know.”

5. Stupid is as stupid does.

“A coworker attempted to prove that you couldn’t actually hurt yourself slipping on a banana peel by stepping on one.

After which he slipped and hurt himself.

I refused to write it up as an incident. It was too stupid.”

“I worked in returns at IKEA and had a customer complain that they accidentally ripped the instruction manual in half for the furniture piece they were assembling when they were cutting open the box and couldn’t finish assembling it.

I politely informed them that all our instruction manuals were available online in PDF form, but this just made her mad and she wanted to speak to the manager.

Manager gave her a few $5 gift cards just to get her off my back but I will always find it so funny that this lady thinks accidentally cutting in half an instruction manual (she had both halves too so she could have just easily put them together to read the instructions) inhibited her from assembling furniture.”

“A coworker routinely didn’t flush after doing #2 in the employee men’s room. He just left it there in the toilet for all to see.

The guy thought it was hilarious – especially when other employees would call him out on it.”

“I work in film and television.

We were shooting in a pretty upper-class neighborhood and the woman living beside the house we were filming in decided that she hasn’t been paid enough. So a few hours into our day she starts playing opera music as loud as she can with all her windows open. After an hour or 2 of that and no one batting an eye she ramps it up and starts mowing her lawn.

Once that was done she just sits right on her property line with the mower going full blast until a producer went iver and kindly asked her to stop. I’m not high enough in the production to know how much she was asking for but apparently it was too much because he walked away shaking his head and told thr sound guys there was nothing he could do.

Once night rolled around my boss decided screw this lady legs annoy her right back, so we got some 10k lights which are pretty goddam bright, and pointed then directly into her windows. It was basically mid day sun light blasting into her house at 10pm. That’s when she called the police saying that we were filming illegally (it was a full union show with permits and on duty police were also there).

So a cop pulls up sees the other police already around for blocking traffic, goes to the craft table and gets a snack and leaves. We turned off the lights to her house around 1am because we’re not animals.”

“I work in influencer marketing and we hired an Instagram influencer to work on a yogurt brand campaign.

As part of the activation we also sent a tie-dye kit and branded swag for them to make tie-dye shirts, hats, etc, with their friends or family. One of the influencers pulled the tie-dye ink out of the t-shirt kit and used it to tie-dye her yogurt bowl, took a video of herself eating it, then shared the video with her followers who ultimately alerted her that you can’t eat tie-dye ink.

This was, of course, our fault (the agency) for not being more clear that the tie-dye kit was not edible.”

“As a teenager while working as a cashier at a store, I was robbed at gunpoint by two dudes with guns pointed inches from my face.

I was literally still shaking from the ordeal, and somehow they felt that I was good to work until midnight as a teenager. I asked to go home, as did everyone else. Management decided to compensate us for the trauma by paying us for the remainder of our shifts but, said that we still had to work our next shifts and could not call out. It’s amazing how insensitive some people in management can be.”

“I was “counseled” for a good hour because I offended the other ladies in our small office by…get this…..I used big words that they didn’t understand. Not bad words. Big words.

The ridiculous/sad thing? The job was for a book manufacturer and at any given time there were several dictionaries being printed.”

“I was a tour guide in Central America for a few years. Here is a short list:

Bribed border officials several times. I could actually claim those on my expense reports.

Passenger took drugs from a stranger in El Salvador and apparently didn’t pay for them. Drug dealer came to the hotel late at night looking for money. I paid him to go away.

Had to get a passenger out of jail in Belize.

Had to evacuate our tour out of Honduras due to a coup and subsequent lockdown/curfew in 2009.

Had to evacuate a group out of Belize for a hurricane that never came.

Had to kick a guy off the tour in Guatemala for being an a**hole.

Got food poisoning myself a separate time in Guatemala and had to explosively s**t on the side of the road in front of my tour group.

Got a panicked knock on my door to procure plan B (morning-after pill) for girls a few times. Not a result of my actions.

Had a couple decide they wanted a divorce halfway through the tour, but wanted to finish the tour. They had horrible fights in front of the tour group daily.

Passengers complained about seeing one of the other passengers with pr**titutes that looked uncomfortably young.

I got deported from Canada

A passenger went to a seedy strip club alone one night and woke up the next morning with pink eye.

Passenger was so scared of eating local food that she brought a small duffel bag of protein bars and only ate those. By day 4 she was complaining of stomach cramps and her farts were so bad that I thought they would strip the paint off the interior of the bus. I had to help her find a McDonalds or something so that she would eat actual food.

I’ve been to countless world wonders and UNESCO world heritage sites hungover or still drunk from the night before.