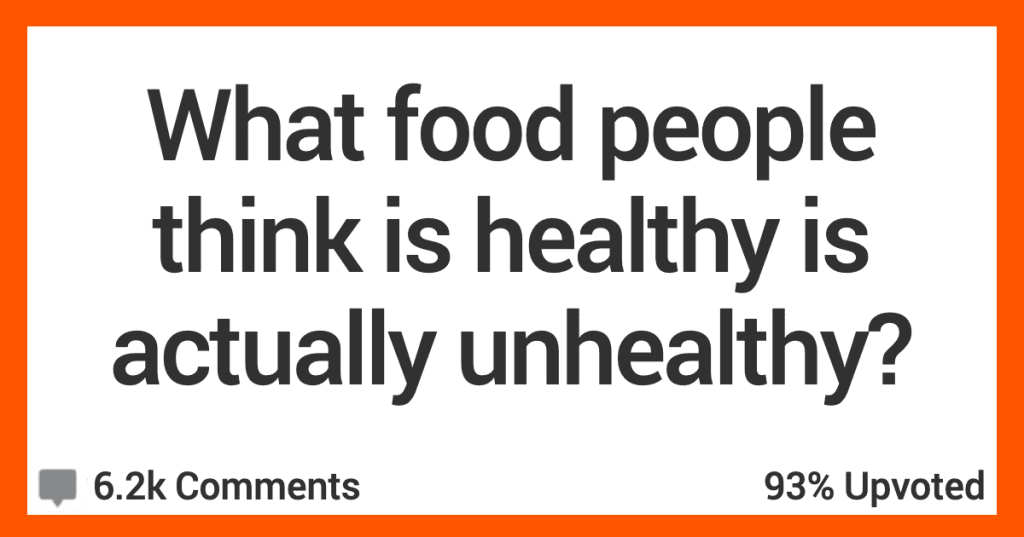 And I’ve had a couple of vegan friends in the past who, while they stuck to a vegan diet, didn’t eat healthy at all and actually got pretty sick because they were only eating sh**ty food.

This brings us to today’s conversation…

What foods are considered healthy but are actually UNhealthy?

“Most yogurt in United States……full of sugar.

I have been to several other countries and their yogurt has drastically less sugar.”

They’re not good for you?

Someone lied to me…”

Those guys have more sugar in them than a king sized Kit Kat!”

5. Still not great for you.

I know so many people who think Chick-Fil-A is healthy and I have no idea why. “I don’t eat fast food except Chick-Fil-A because it’s healthier.”

It’s fried chicken. You know those people aren’t ordering the salad there.”

Their “eat fresh’ marketing really got to people.

But by the FDA’s guidelines, it’s closer to cake than it is bread.”

I have heard more than one person say that it is “good for you”. People are dumb.”

“Most kombuchas you can buy at the store.

It’s a great product for gut health but the kinds at the store are loaded with fruits and sugar.”

“Literally anything that comes from animals.

Meat and ESPECIALLY dairy are some of the most awful things you can put in your body.”

There is a Herbalife shop that opened in my hometown and everybody is drinking them on the basis that they are super nutritious and healthy.

People will see “nutrition” and just drink them without any research or anything.”

“I’m convinced everything is unhealthy nowadays.

Everything has corn syrup in it in America.

Short of me foraging or raising livestock myself, it’s all unhealthy.”

“Excessive exercise. You must rest.

Also denying yourself treats just because you think it’s bad is psychological harm which can have depressive effects.