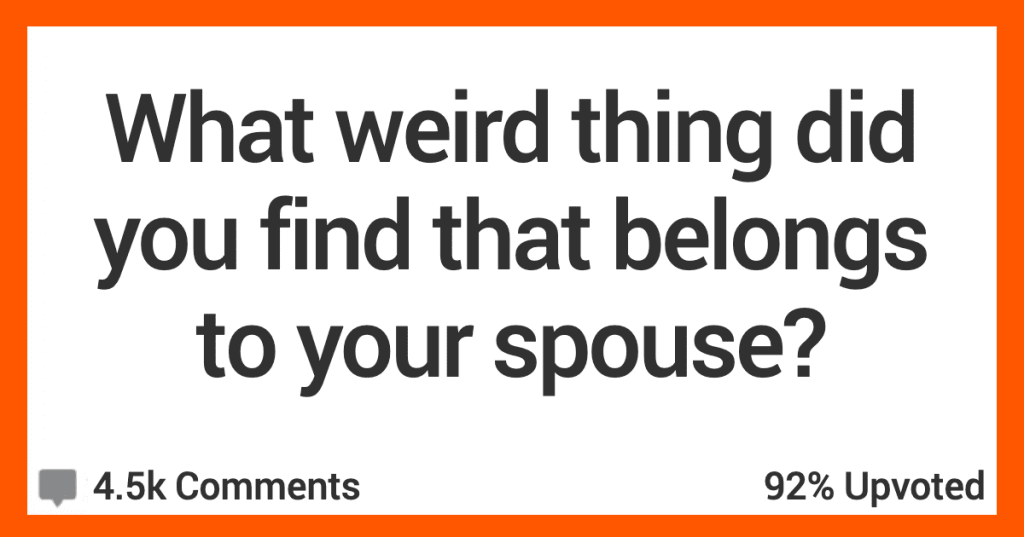 I guess it’s possible to find things by accident in your spouse’s things but I have a feeling a lot of people out there can’t help themselves and they like to snoop through their spouse’s stuff.

And today we’re gonna hear from people on AskReddit about the most shocking things they’ve found in their spouse’s possession.

“When my ex and I lived together I found a box with a single set of dishes under his side of the bed.

When I asked him about it, he said he was keeping them just in case he decided to break up with me so that he could leave at the drop of a hat at any given moment.

I remember the conversation, he seemed so nonchalant about it all. Turned out to be a total sociopath.”

“A credit card I didn’t know about.

She used it to spend $$$ on boyfriends.”

“My wife has a used he**in needle. She says that it’s the needle her mother overdosed with.

I noticed it about 20 years ago when I was sorting through s**t. Found a random needle with no cap and kind of freaked out. It now has it’s own sealed case so it can’t s**b anyone.”

Apparently he had used it for a Halloween party and then stashed it away in the attic.”

“A child I didn’t know about.

Didn’t live with us, apparently she had been married before and had a kid she ditched with the dad… never told me about it… found out one day when I opened the mail and a letter from another state came about repaying the kids government assistance.”

“Ex boyfriend had a tin full of his toenail clippings that he for some reason saved.

There. I said it.

“Ex husband now, when moving into the house we bought after getting married we were sorting through his boxes to see what to keep/throw out.

Found a book called something like “How to Succeed at Group S**”. lol

I was afraid to ask questions at that point.”

Yeah definitely the 3 year d**d rat in half a jar of mayonnaise.”

“A notebook with a partially finished letter describing in detail how she cheated on me and how she wasn’t happy in the relationship.

I called her at work and asked about it and she confirmed it was true. I was packed and gone before she got home.

Moved 3 hours away with my best friend and had a great time since then.”

I found a noose.

He said he would use it on himself.

He turned out to be the scariest person I ever came across.”

“My first night/date out with my now wife, she pulled a d**d bird out of her pocket… it was in a sandwich bag at least.”

I’d been paying the cell service and at that time you’d get a print out every month in the mail of phone calls etc (which is another story), on this cell phone was a bunch of dudes she was talking to behind my back, also videos of the guys…

I wanted to puke.”

What shocking things have you found in your partner’s possession?