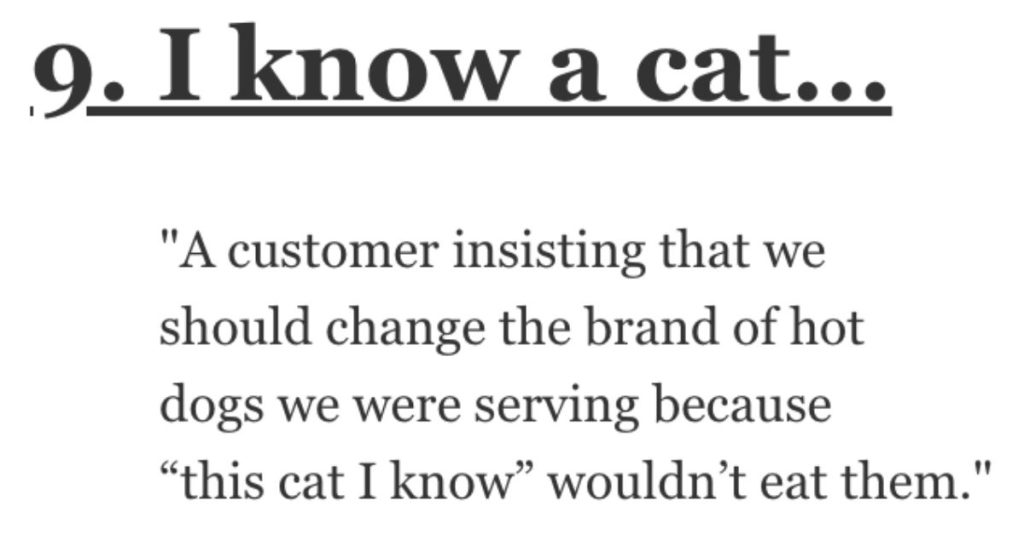 What’s the Most Ridiculous Thing You’ve Had to Deal With at Work? People Shared Their Stories.

One time when I was in college, I worked briefly at a dog food factory…yes, you read that correctly.

I got placed there by a staffing service and it was, to say the least, an interesting experience…and kind of ridiculous in some ways.

What are the most ridiculous things you’ve ever dealt with at work?

“A coworker screaming at me for leaving food to rot in the shared fridge.

It was my first day there and I hadn’t even unpacked my belongings yet.”

“I work at a library.

The amount of people who don’t bring their library card with them and then refuse to give me ID so I can look up their account is baffling. I’m just trying to prove they are who they say they are.

Also a mentally ill lady once told me that Osama bin Laden wanted to steal shoes from the artist formerly known as Prince.”

“I had someone throw a drink at me through the drive-thru window, which is an unwise thing to do to someone standing in front of a shelf of other drinks waiting for the customers behind you.

Close second: we had a guy that robbed our gas station for like a month with a finger g** before he finally got caught. Everyone knew it was a finger g**, but you have to comply when someone robs the store so….”

“I work at a pet resort/spa.

I’m checking in this lady’s dog at like 7 in the morning. Real sweet lady, she has an Australian shepherd. But before I take the dog inside to his kennel for the groomers, she asks me to tell the groomers to separate whatever hair they shave off him into separate ziplock bags based on color and texture.

Turns out she makes jewelry out of her dog’s fur. Later in the day I bring out the dog along with probably 7 little baggies of hair and the lady was very excited. She gave me a fat tip so I didn’t complain but that’s by far the weirdest request I’ve heard in all my time working there.”

“One time my boss saved a hurt goose and put it in a box and made me take it to an animal hospital.

Driving down the highway the goose started flapping and got out of the box.

I didn’t know what to do and I was scared to grab the goose so I drove the whole way there with a goose riding passenger.”

“Part of my job is emailing bills to customers. Some companies have crazy requests on how they get their bill. One company won’t pay their bill unless it’s sent by mail. He won’t respond to emails.

Another company will only allow 1 page scanned per attachment and only 1 attachment per email so if the bill is 5 pages. I need to scan each page individually and email them individually.”

“Had a coworker eating other peoples lunches instead of bringing her own, or just take one or two things.

She’d sneak in the break room before breaks.”

“Worked in HR for a non profit that hired people people who are legally blind. That was the mission.

One day, two employees got into a fight. One was partially sighted and the other totally blind swinging his cane.

I had four witnesses to the altercation. But they were all totally blind and thus, couldn’t tell me what happened.”

“A customer insisting that we should change the brand of hot dogs we were serving because “this cat I know” wouldn’t eat them.

Not her cat just a casual cat acquaintance.”

“I work in the funeral industry, so I get to deal with new ridiculous things on a near-daily basis.

For example, today I had to look for a bullet in a body bag, because the list of personal effects of a deceased that we got from the medical examiner included ‘ammunition x 1.’ This person was going for cremation, and bullets in a crematorium are a no-no for obvious reasons.

So, we looked and looked, inside the body bag, inside the clothing, pockets, shoes, under the body; I even shone a flashlight into the hole that used to be the deceased’s face to see if it was maybe still in the head-ish area, but no. So after 20 minutes or so of thoroughly searching this poor d**d person, I called the MEO to see if they had the bullet.

The girl who answered the phone checks with the morgue and comes back to say “yep, it’s here, we always take and keep the bullets!” Great! Then WHY list it on the personal effects sheet with everything else that is still with the body??

“A group of four grown men sneaking into the fitting room to smoke a joint.

This would already be really, really dumb except the store they did it at was…Justice. For non-Americans and those outside the demographic, Justice was a clothing store for tween (or 8-12 year old) girls. They didn’t sell anything for men at all and it was literally impossible for them to blend in.

Moreover, the tops of their heads were visible over the child-sized stall curtains. We called security, they got escorted out, and we had to close to air out the windowless store. I have no idea how they thought this was going to play out.”

“Worked at a grocery store.

Do you have any nightmare work stories?