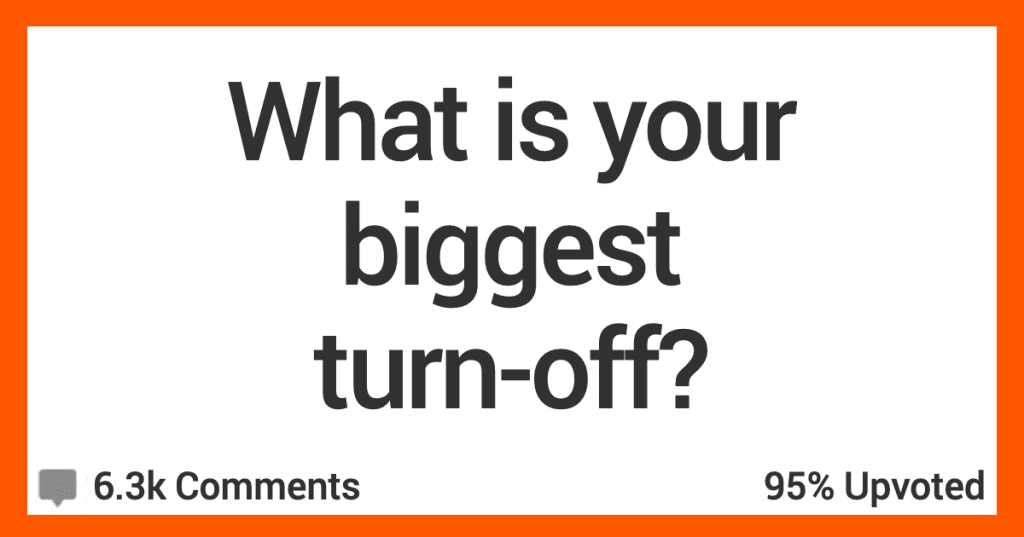 How much time ya got, buddy?

What I’m trying to say is that A LOT of things turn me off.

But enough about me!

Let’s hear what people on AskReddit think about this.

“When someone is rude to wait staff or any customer service people.

That kind of behavior will instantly make me walk away.”

“People who are unnecessarily mean spirited and use the feeble “I just say it as I see it” or “I’m just too honest” excuse.

That’s the equivalent of “I’m not r**ist, but…”, except for insufferable a**holes.”

“When someone calls themselves a queen or a king the first time you meet them.”

It doesn’t really matter how great of a person you are or how attractive you might be.

If standing near you is so unpleasant, it’s going to be difficult to form a positive connection.”

If you can’t hold a decent conversation with me then im sorry I’m not interested no matter how hot you are.”

“I’m really uncomfortable with public affection for some reason, at least early into a relationship.

Definitely more of a me issue than anything else but it has affected past relationships.”

Basically being totally unaware of the space you’re taking up without respect to anyone else.”

“Back in my younger days, I ended up going home with this girl from a bar. She was pretty cool, decently attractive, and I was all about it.

Got back to her place, went to her bedroom, and then I saw it, the dealbreaker. Hanging over the back of her desk chair was a Terrell Owens Eagles jersey. The worst possible player on the worst possible team. I took a phantom “emergency” phone call and excused myself and walked the f**k outta there with my head held high.

Pretty sure I saw the corner of a Chase Utley Phillies jersey peeking out of her closet as well, further solidifying my decision.”

When a woman goes Karen for any reason I am turned off.

Saying things like no offence…but, or I know my rights, all of those little things that tell you she believes she’s superior to everyone else. I’m simply not interested.”

“Being rude to people they don’t have to be kind to.

It costs literally zero dollars to have decency and treat people with respect.”

“I have anxiety. Inconsistency is a huge turn off for me.

In relationships or while dating, it’s incredibly hard for me to deal with someone who shows drastic inconsistency in any number of areas.

I feel unsafe with them and I find it incredibly unattractive, to not be able to fully count on someone like I believe I should be.”

Shows a lack of critical thinking and general awareness of the world versus what they want to believe.

There ARE minimum standards of appearance but a closed mind is a big red flag.”