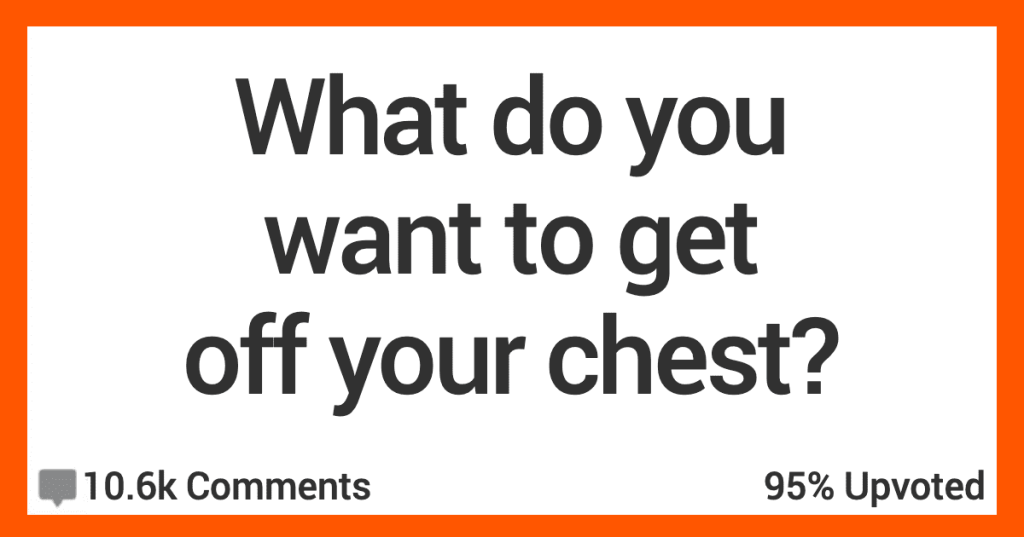 We all have those times in our lives when we desperately need to get things off our chests.

And today we’re going to hear from AskReddit users who just need to let it all go!

“My anxiety is controlling everything and no treatment is working.

“I’m sick of life and it’s been nothing but pain and suffering.

I’m patiently waiting for the day I draw my last breath and it’s game over.

It will not be missed.”

“I feel like a stray human. I feel like I’m always alone just going about life and it seems like its just how its going to be. Like life eluded me no matter how hard I tried to grab a hold of it

Now I’m I my mid-30’s and I both feel like I just began to live, while at the same time I am settled into the fact that maybe its too little, too late.

I figure I will save up and travel the world, completely aware Anthony Bourdain saw the beauty of culture and he still…”

“I’m worried I’ll not be able to survive in the real world money wise or just not be able to handle the workload at all if I continue studying and aiming for my dream.

Not only that but there’s so much competition in the field that at times I don’t believe I have enough talent to even land a job. But at the same time I’d h**e being stuck with a job that makes me feel miserable.”

“Someone always wants or needs something from me.

6. Stranger in a strange land.

Everything is just so strange I have a hard time making sense of it all. Probably sounds weird. Or maybe everyone feels that way and they keep it to themselves too.”

“A man hit my son at the public park a few months ago, and now I’m afraid to take him there by myself. I usually meet my girl friend and her daughter (our kids are best friends) there, but when she can’t go I make excuses to stay home or go somewhere else.

My son (4) was trying to ask to hold his daughter’s hand, and he hauled off and hit my kid and began bellowing in his face. I was less than ten feet away, helping my friend’s daughter tie her shoe and saw the whole thing. I confronted him while another parent further away called police.

I didn’t ask them to, but they did. Police arrived and said there was nothing they could do because the man and his daughter fled. The other parents and my friend were super supportive. I shook for hours afterwards. I’m not a confrontational person, normally.

The guilt and failure eats at me every weekend.”

“I would like to take a break from my work which is mentally and physically draining.

And just travel without thinking about budget.”

“I’m scared my relationship with my oldest son will never be as close as it once was. We used to be inseparable.

He is going into 7th grade and is hitting puberty. He is angry at me for very little things and his mother encourages it(we are divorced). My youngest is 8 and currently sleeping in the room next to me while my 12 year old is at his mother’s house.

“From the outside looking in, I have it all.

“I’ve grown to h**e my mom quite a lot. She is super judgmental to others and claims to “know” things about people.

She often s**t-talks my friends calling them rude or inconsiderate but she flips the script either when they’re around or when whatever her previous belief about them was is disproven to which she will say things like “I’ve always liked them” or “I always had a feeling they were super nice.”

Recently she has been attacking my girlfriend of three years for being “crazy” and frequently calls her stupid. My girlfriend got a new job recently and mom has told me on several occasions that she’s not gonna like it and she won’t be able to do it, but upon hearing how well she’s been doing and how much she likes her new position she has quickly changed her attitude claiming that she always knew she would like it and knew she would do good.

She also frequently tells me about how my dad is bad for our family because he won’t quit his job and get a higher paying one. While he makes much less he certainly makes up for it by performing a lot of house work and maintenance. He has also built several additions to the house since we moved here in 2016 and despite all of that she refuses to consider his feelings or mine about her excessive drinking and has told him to move out on several occasions.

I love my mom and I have a lot of good times with her, but with each passing day everything she says and does feels very fake, and even though she has done a lot for me and continues to do little things like buy me video games when I’m a very capable adult, i still feel much less connected to her and often don’t recognize her. It breaks my heart and I have a lot of built up stress about it. I don’t have any other place to go, and this doesn’t feel like home anymore.”

What do you want to get off your chest?