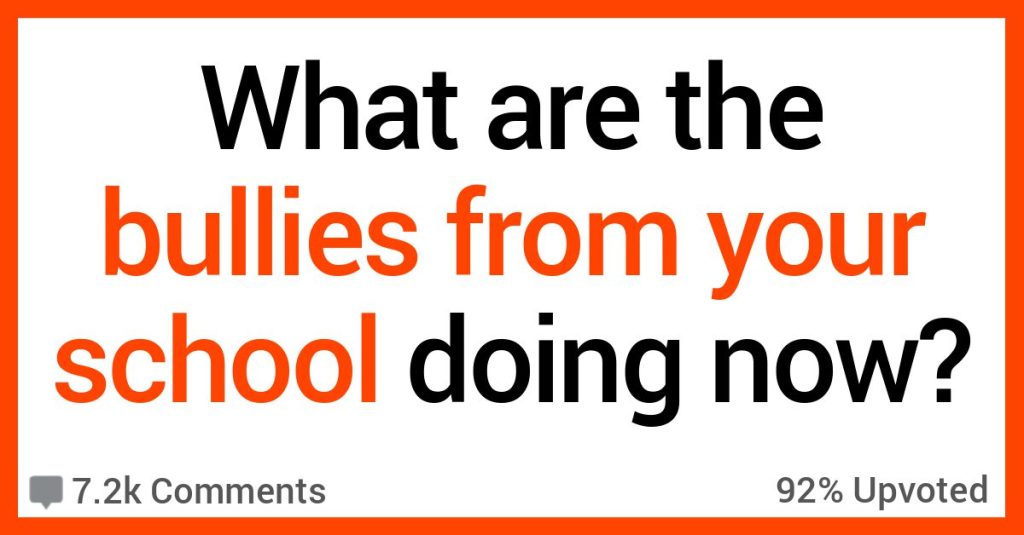 12 People Share What Their School Bullies Are up to Now

I didn’t have any b**lies in high school, but I had a couple in elementary and middle schools…and they were total s**theads.

I have no idea what ever happened to them and honestly, I don’t care.

But today we’re gonna hear about what happened to some of these jerks that used to terrorize kids.

What is your school b**ly up to these days?

1. This needs to be a reality TV show.

“They all had children together straight out of school, then seemed to swap partners and have more children.

Now there is a whole bunch of them who all h**e each other because they’re all dating each other’s exes and all the kids have half siblings all over the place.

There’s about 8 ex-b**lies in this partner-swap web and it’s a mess. I still love watching all the Facebook drama it comes with though.”

“They all came out of the closet as lesbians.

I guess they were b**lies in school to hide it.”

“He is a doctor now. Got a job as director at his parents hospital at the age of 26. Some people have it set for life.

Then covid pandemic hit and it was business booming for private hospitals in India, so now they are building a bigger hospital.”

“My elementary school b**ly was shot right outside my window, I kid you not. Poor kid.

He was only 17 when he d**d. I hold nothing against him and I wish his life weren’t cut short so tragically.”

“The only guy who ever tried to b**ly me and start a fight with me oddly enough disappeared at sea with some of his sidekick buddies.

Four guys went diving then as the story goes as they surfaced, their boat was half sunk. If then continued sinking and they were left miles from shore. However, they were wearing dive gear meaning tanks, snorkels, masks, fins, BCDs (inflatable life jackets more or less).

Who knows, only that one guy and he sticks to his story like glue. The boat was retrieved and it had no issues like leaks. Though it could be argued that the engines were too large and allowed the back of the boat to be too low or something. It’s been 30 years and the families still have a website out with info on them but … they’re gone man.”

But I also found his Twitter feed which was filled with nothing but profanity-laden tirades against sports teams (there was literally nothing else) and I found his LinkedIn page that said he was a shift manager at Starbucks.”

“Last time I saw him we ran into each other at a party, and he was sweating because I had a restraining order against him.

I didn’t really care as long as he left me alone, which he did rapidly.”

One of the biggest b**lies from school, who I lost touch with, and honestly didn’t miss, ended up coming out as gay about 15 years ago.

Turns out denying who you really are makes someone pretty angry. He’s really cool now.”

“Recently moved back to my home town and ran into one of the old b**lies.

After some rough years he’s totally turned himself around and distanced himself from the other a**holes. Super nice guy now who’s working hard to make something of himself.

He apologized profusely for being a d**k and actually wants to be friends… and I’m down for that. We actually have a lot in common!”

“This guy tormented in any class I had with him. For no reason, he’d look for something, anything and focus every one’s attention on that as he made fun of me.

He works at the Subway down the street from me. Nothing wrong with working at Subway, but he didn’t become the “baller” that he originally set out to be.”

“The biggest b**ly/meathead ( think Biff Tannen) is running a successful IT company as well as a clothing brand.

Shouldn’t be too far from being a multi millionaire now.”

“I looked up the worst four a few years ago.

Two are d**d: Auto accident for one, cancer for the other.

One is living on disability as he is losing larger and larger pieces of leg to diabetes.

One manages a car repair place.”

What ever happened to your b**ly?

Talk to us in the comments and share your story.