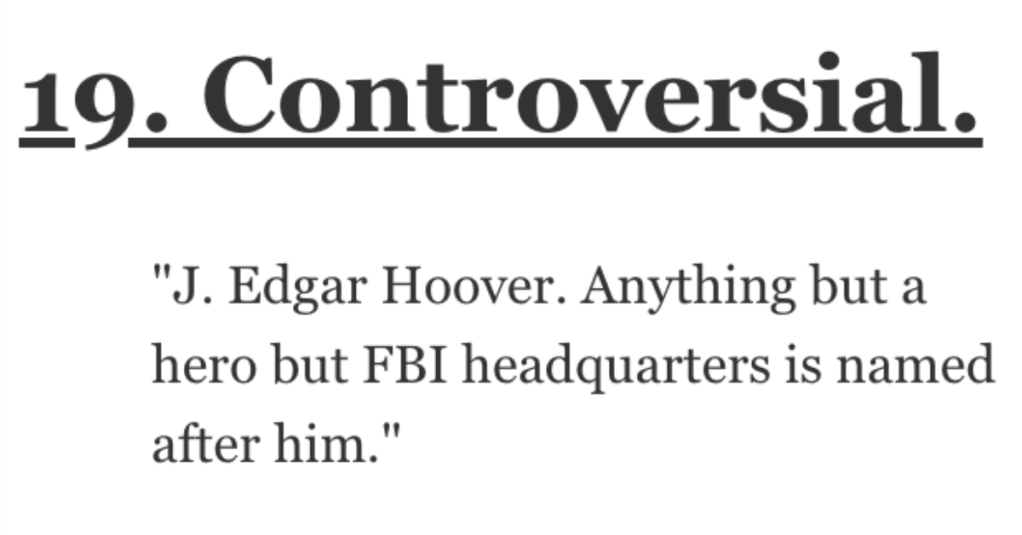 People Talk About Who They Think Are Wrongly Portrayed as Heroes

I grew up in Kansas and I’ve heard a lot of debate over the years about whether abolitionist John Brown should be looked at as a hero.

And people still talk about it today.

On one hand, there’s a huge painting of him inside the Kansas Capitol building that pretty much every kid in the state visits at least once.

On the other hand…well, the guy was kind of a psycho and he k**led people…so there’s that…

People on AskReddit talked about who they believe are wrongly portrayed as heroes.

Sometimes referred to as “the last man to enter parliament with honest intentions” and ended up as the face of the anonymous movement.

Also, he wasn’t even the ideologue behind it, that was Robert Catesby, Fawkes was the guy (wahey) they hired to detonate their explosives.”

Ma**acres the native American populace by relocating them via the trail of tears.

I love Lennon but there is no doubt he treated women like s**t and straight up ignored one of his sons.”

I don’t understand why people idolize this movie so much.

He was a d**k to everyone in the movie and paid basically zero consequences.”

5. What were you taught?

“Christopher Columbus was totally taught as a hero when I was child for some reason.

Although things seem to be changing on that.”

“Oliver Cromwell has a statue outside the British parliament.

The guy was an open r**ist who recreated segregation in the US government, promoted the KKK, and completely botched the peace after WWI, leading to World War II.”

He wasn’t necessarily portrayed as a hero in the show, but thinking of how people talk about him in real life makes it seem like they got the wrong idea.

He’s used as a prime example for stoicism and confidence. His manner is something that men strive to be back then and now. I just finished re-watching the show and can’t help but get huge narcissistic vibes from him.

He doesn’t admit to faults, everything is tied to his pride (of his stolen identity), he constantly feels rejected and needs to feel special (despite the advertising world fawning after him). He can’t stay in a committed relationship and reacts in a hypocritical manner if he is on the other end of an affair.”

Okay, so let me qualify this a bit, because by all accounts he actually WAS a heroic battlefield commander. (EDIT: Also note that we’re dealing with secondhand info from the 450s B.C.) It’s the other stuff that’s wrapped up in his story that gets bad.

Cincinnatus was made dictator of Rome twice (afaik), and he got famous for prosecuting a successful war and laying down his office immediately afterward. But that’s the culmination of a career in which he was so virulently opposed to giving basic rights to people who weren’t members of the aristocracy that he was forced to leave the city, his son was exiled during a series of (effective) gang-wars against the dirty poors, and he drove to suicide the person who spoke out in court against his son.

He thought that WRITING DOWN THE LAWS (so that, you know, people know whether they’re obeying the law) would reduce the power of the aristocracy too much, so he spent his whole life (and ostensibly the life of his son) fighting against it.

“Significant amounts of people think that Walter White was a hero who was willing to go to extremes to provide for his family, completely ignoring the countless outs he had and the fact that he literally admits it was all about his hubris in the finale.”

Straight up doomed the world for selfish reasons and attempts to m**der a child on several occasions.”

“The McDonald’s guy from that movie “The Founder”.

It’s crazy to me how many of my friends (admittedly a very bro-ish group, but I love them) watched that movie and thought he was a hero. A literal thief.

Same thing with Jordan Belfort, HE’S NOT A GOOD GUY. I think it’s a big indictment on the American mindset that people so easily see them as heroes.”

“The Map from Dora.

Say what you want but that lil MF is working with Swiper.

How does he always know where Dora is or where she’s going?”

“Greg Heffley from Diary of A Wimpy Kid.

He’s such a s**tty friend to Rowley.”

“Jack from Jack and the Beanstalk.

He breaks into the giants house, steals his treasure, then k**ls him when the giant tries to get his gold back…”

She m**dered the witch of the East, stole her shoes, and gave them to Dorothy. She then tells Dorothy that if she wants to get home, she should go see the Wizard.

After the wizard is revealed as a fraud, Glinda shows up and is all like “You could’ve gone home any time you like by clicking your heels together.””

She was just an a**hole the whole movie.”

“Jerry from Tom and Jerry.

He annoys Tom and when Tom tries to catch him, Tom has to face the consequences instead of Jerry.”

Anything but a hero but FBI headquarters is named after him.”

“Carrie Bradshaw is a horrible friend, a manipulative and flaky partner, and a deeply irresponsible person all around.”

“PT Barnum exploited marginalized people and was not the hero portrayed in “The Greatest Showman.””

“Mrs Doubtfire. He was a deadbeat dad and lost custody.

He was given very fair terms to see his kids again. Get a stable job and stock being a passive aggressive deadbeat. Instead he decides to pretend to be a old lady to infiltrate his own house and use that knowledge to manipulate his family.

Then when his wife dates a Pierce Brosnan, who seems like an good dude and genuinely liked her kids and was willing to be a father figure for them, what does he do. Vandalises his car and knowing gives him cayenne pepper that he knows he is d**thly allergic to.

The poor guy could have d**d. But it’s okay cause Mrs Doubtfire is the hero.”

She’s so self entitled, inconsiderate, and a brat . She blames everything on everyone else when it’s her fault .

She’s not some fairy hero , just someone who messes up s**t , then has to clean up for it after blaming a series of people .”

She asked the Olsen twins their clothes size at the height of their eating disorder.

She also had cult leaders featured on her show, like John of God.”

Almost k**ls her sister twice and is still heralded.

Anna saves the day but Elsa gets all the hype.”

In the comments, tell us what people you think are wrongly remembered as heroes.